Seven years ago, David Mamet capped a winning streak as a film director with his engaging farce State and Main, following his twisty 1997 thriller The Spanish Prisoner and his elegant 1999 period drama The Winslow Boy. 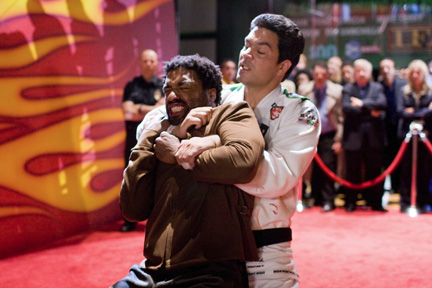 At that time, his success moved me to write, “Mamet is poised to conquer the screen as he long ago conquered the stage.” So how’d the conquest go? Uh, not so well. After 2000, his only films were the caper flick Heist and the political thriller Spartan, both arid exercises with some witty moments. Now he’s back, with – of all things – a martial-arts movie called Redbelt, inspired by Mamet’s real-life study of Brazilian jiu-jitsu. (If you think that’s surprising, his next planned project is a kids’ movie entitled Joan of Bark: The Dog That Saved France.) Since any predictions I make about Mamet’s career are clearly worthless, I’ll just tell you that Redbelt is tasty stuff, whether you’re a fan of martial-arts cinema or not.

Chiwetel Ejiofor stars as Mike Terry, who teaches jiu-jitsu (the Brazilian spelling of the Japanese word) to cops, bouncers, and Hollywood stuntmen out of his storefront academy in L.A. The school is leaking money, and his wife (Alice Braga) is getting tired of keeping him afloat. When a jittery lawyer named Laura (Emily Mortimer) walks in and accidentally blows his plate-glass window to splinters, Mike has to choose between replacing the window or paying his rent. His financial problems would be easily solved if he took his fighting skills to the mixed martial-arts circuit, but he refuses to fight for a purse.

Mike’s notions of purity are severely tested even before he’s caught up in the entertainment industry, a fairly common theme in Mamet’s films. This integrity vs. commerce dilemma was much funnier in State and Main, but it still engrosses you here. Mike rescues an aging hellraiser of a movie star (an atypically understated Tim Allen) from a bar fight, which gives him some prospects that only complicate his moral issues. The world of big-time mixed martial arts is presented as a nest of vipers, many of whom are played by Mamet regulars: Ricky Jay as a crooked fight promoter, David Paymer as a social-climbing loan shark, and Joe Mantegna as a Hollywood producer angling to make a buck off the MMA craze. These people shamelessly fix fights and steal one another’s ideas; no wonder Mamet had to invent a fictitious fighting organization for the movie. This usually doesn’t work in sports films, but it comes off here because MMA is relatively new, and because the director pulls it off rather well.

This plot cleverly intersects with the seemingly unrelated storyline stemming from the window incident, which brings legal trouble down on both Mike and his prize black-belt pupil Joe (Max Martini), an off-duty cop who happens to be present when it happens. The cop isn’t one of Mamet’s more successful creations, and his subplot builds to a scene with some unwatchably bad acting (by Cathy Cahlin Ryan as Joe’s wife). However, this half of the movie also boasts a terrific bit in which Laura’s private demons cause Mike to give her a cathartic crash course in self-defense. Mamet has taken a lot of flak over the years for the way he writes women. He has deserved much of it, and even this movie isn’t free of those issues.

Yet there’s no denying the power of watching Laura exorcise her demons for all time by learning an escape move. Compellingly played by the two actors, this scene is so rousing that you’ll want to stand up and cheer. Ejiofor deserves some applause, too. Since he first garnered accolades starring in Dirty Pretty Things, the English actor has spent much time in Hollywood playing a virtuoso second fiddle to Denzel Washington (Inside Man and American Gangster) and Don Cheadle (Talk to Me). Here he looks more assured than ever as a leading man, investing the part with a serene authority that’s important for someone who counsels fighters. Check out the opening scene, where even though two other guys are sparring in his studio, your attention still gravitates to him as he advises them in his soothing baritone voice. (“Take the fight out of your face.” “You know the escape.”)

He also has enough martial-arts chops to look like he belongs in the same ring with the real-life MMA fighters, who populate this movie. The way he commands the screen here is reminiscent of Laurence Fishburne’s character in the Matrix films, except that Ejiofor is a much emotionally warmer presence and easier to relate to. Learn to pronounce this actor’s name (EDGE-oh-for), because he’s going to be around for a while.

Redbelt’s climactic fight sequence isn’t quite as kick-ass as you’d like; Mamet’s no great visual stylist, and his filming of the combat scenes is only acceptable at best. Yet the shortfall is more than made up for by his leading man’s charisma, and the intelligence and rigor that Mamet brings to this winning genre piece. Suddenly, I can’t wait to see Joan of Bark.