Home News Metro Foot Off the Gas
SHARE
Facebook
Twitter
For the past year or so, economists have been saying that North Texas seems immune to many of the money problems facing the rest of the country.

Housing prices have not suffered as badly as in many places, job growth is high, and the Barnett Shale gas drilling is pumping billions of dollars into the economy. Many folks, therefore, think it odd that Fort Worth is planning to reduce its services over the next five years. A recent study by the city staff and economist Becky Brooks Grimm, executive director of the Government Finance Officers Association of Texas, predicts the city could face a $24 million budget shortfall by 2013, and departments have been told to figure ways to slash their spending by as much as 30 percent. Fort Worth is also planning to freeze hiring over that time period.

The study predicts that increases in city revenues from sales taxes and property taxes will not keep pace with growth in demand for city services. But even though the city will be bringing in more than $1 billion over the next 25 years from gas drilling on city-owned land, that money is not being counted as revenue, due to the decision to put half of it into an endowment fund and also due to federal and state restrictions.

Those restrictions require, for instance, that profits from gas drilling beneath parks and city-owned airports be spent only on the park system and the airports, even though the gas income for those programs looks as if it will far outstrip the needs in some cases. Between those rules and the endowment fund decision, about $50 million of the expected $1 billion would be left available for other uses – or $2 million a year, a drop in the municipal bucket. 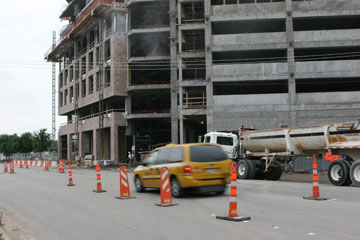 Moncrief suggested at a recent budget workshop that the council consider a property tax increase to make up the shortfall. “I told him no and hell no,” Silcox said. Moncrief did not return calls for comment. His spokesman, Jason Lamers, wrote in an e-mail that “never at any time did the mayor ‘advocate’ for a tax increase at any workshop or any meeting” but said “council would have difficult decisions to make.” Spending cuts will be decided by council in August when the 2009 budget is on the table.

Economic predictions can be extremely complicated. In this case, the study said city expenditures are likely to rise by 5 to 6 percent a year during the next five years, while revenues will go up only 4 to 5 percent. The study says that new housing will not be growing as fast and that sales taxes revenue will expand at a slightly slower pace than past years. Hence, the predicted shortfall.

But other economists are predicting a financial boom from the Barnett Shale play. The Waco-based Perryman Group recently did a study for the Fort Worth Chamber of Commerce, which concluded that the gas drilling pumped $8.2 billion into the North Texas economy in 2007, with revenues growing by a whopping annual 19 percent in each succeeding year.
So who’s right? Ray Perryman, president of the Waco firm, said “the Barnett Shale boom will affect all parts of the economy, from job growth to housing values to spending. That being said, cities have to look at all sorts of factors. Some pull one way, while others pull another.”

The city budget projections take none of that into account. “According to the policy on gas revenues, we are not factoring anything into the general fund,” said Karen Montgomery, assistant city manager and chief financial officer. She pointed out that a citizen’s committee appointed by the council recommended the city put half of the revenues into the endowment fund, a bank account where the principal cannot be touched for 25 years and interest can be used only for capital expenditures.
“The city staff is in complete agreement,” Montgomery said. Barnett Shale “is a one-time revenue and is very dependent on market forces. If we used that money to balance the budget by paying for ongoing expenses, you might be able to balance your budget today, but you delay solving your problems.”

It’s one thing not to plan on spending the city’s own direct gas income to balance the budget. But the city-ordered study also did not take into account any factors such as the effect of the Barnett Shale boom on sales tax revenue. Sales taxes are about 18 percent of city revenues (property taxes are 58 percent), and the sales tax growth projections are based only on population growth predictions, not on the effect of lease money being paid to property owners or the new jobs and new companies serving the gas industry or the trickle-down effect of so much extra money flowing into the region. “It is difficult to predict sales tax revenues, but we also must not assume that the Barnett Shale money will be a driving force on people’s spending habits,” Montgomery said.

Silcox and some others believe the city should reconsider its position on the gas profits. For instance, the city airports – Spinks, Meacham, and Alliance – now have a combined annual operating budget of $3.2 million, with almost all capital improvements covered by state and federal grants. And yet, the Federal Aviation Administration requires that the more than $52 million in expected Barnett Shale income from drilling under those airports be spent there.

According to several sources, city officials have started talking to the FAA and U.S. Rep. Kay Granger about getting the airport restrictions lifted. But why not spend at least $3.2 million of the gas money each year to cover the airport’s operating costs, freeing up that much money for other portions of the budget? Answer: current city policy, which says that the gas profits can be used only on capital projects.

Another problem: The $235 million in profits expected from drilling beneath the Fort Worth Nature Center must be spent on that property or other parks, because the center gets much of its funding from the federal government. But the center’s entire annual operating budget is just $636,000, and capital improvements planned for trails, roads, and parking total only $265,000 over the next few years. The nature center master plan calls for $67 million in improvements not specified over the next few decades. The Barnett Shale money will pay for the master plan improvements; the rest of the $235 million will be split among the endowment fund and other park improvements. Were it not for Fort Worth’s policy, gas money could be substituted for local tax dollars in the center’s budget, freeing up that $636,000 each year for the city’s general fund.

Montgomery said that kind of moving of money from one pocket to another might come into play when departments have to slash budgets. For example, she said, the parks department might buy trucks with Barnett Shale money as a capital improvement rather than paying for them out of the general fund. Beyond those kinds of strategies, Silcox believes the city should rethink the large portion of the Barnett Shale money being put into the endowment. “Budget people are always playing up the ‘woe is me’ factor, but I don’t see that right now,” he said. “In some respects, we have taken common sense out of the equation on how to use this Barnett Shale money.

“I think [Barnett Shale spending] should be discussed and in the open more than we have.” Silcox said. “We could be getting more bang for our buck by spending rather than saving. … It’s very hard to tell our citizens that we want to increase their property taxes while at the same time they hear how great all this drilling is.” Darlia Hobbs, vice president of the Eagle Mountain Lake Alliance of Neighborhood Associations, agreed. “They tell us that all this drilling is going to be a great economic boom for us,” Hobbs said. “Now they are saying it is not as big a factor as some of us have thought. Which is it?

“City council needs to take care of the city now,” she said. “The neighborhoods in this city have been neglected for a long time, and if they want to make this city better for future generations, start fixing the problems now. Cutting city services and raising property taxes is not the way to do it.”