In Judd Apatow’s Knocked Up, the main character and his Jewish friends are huge fans of Steven Spielberg’s Munich: “Every movie with Jews, we’re the ones getting killed. 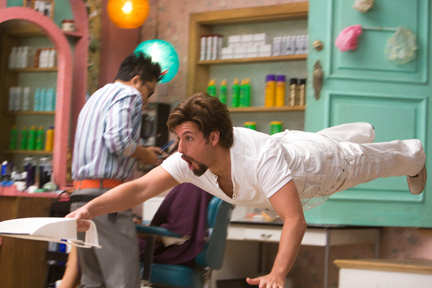 Munich flips it on its ear. We’re killing and taking names!” It’s a good point – Jewish characters get to be many things in Hollywood movies but usually not action heroes, and why should they miss out on the pleasures of kicking ass? It’s ironic that Apatow co-writes Adam Sandler’s latest comedy, You Don’t Mess With the Zohan, because Sandler’s whole film career has been steadily pushing toward action hero.

In his Saturday Night Live days, he was a diffident, slightly built guy singing songs about Hanukkah and his red-hooded sweatshirt. When he started headlining movies in the mid-1990s, they almost always included a scene with him beating someone up. (It was supposed to be funny, but it only worked in Happy Gilmore, when his character picked a fight with Bob Barker and got the crap beaten out of him by the septuagenarian game-show host.) Sandler’s obsession with macho cred reached a peak of unintentional absurdity when he played an NFL quarterback in The Longest Yard.

For contrast, look at Ben Stiller. These two comic actors are of similar age and have matching nice Jewish boy personas, but when Stiller plays super-macho badasses, it’s always purely for cartoonish comic effect. We’re never supposed to take him seriously. Conversely, we’re always supposed to take Sandler’s characters seriously on some level. We’re supposed to like them and care about them, and many of his movies end up openly begging for sympathy for his characters, which seldom looks good. For all his displays of alpha-male aggression, you’re always aware of the star’s neurotic desire to be liked. Sandler has become this generation’s Barbra Streisand, a monumentally talented performer whose inflated ego and emotional neediness too often get in the way of simple entertainment.

For the first half-hour or so, Zohan looks entertaining enough. Sandler plays Zohan Dvir, the Israeli Army’s best counterterrorism commando, and a man who’s so Israeli that he brushes his teeth with hummus. Poor dental hygiene aside, Zohan is a supermensch who can punch through walls, catch bullets in his fingers, bring any woman to an earth-shaking orgasm, and do push-ups without using his arms. (That last bit actually isn’t an unfunny penis joke, though this movie has tons of those elsewhere.) Sandler’s body is astonishingly and suspiciously muscular, but the real reason you buy this comic premise is because Zohan’s heroics are so over the top. Screenwriters Sandler, Apatow, and Robert Smigel seem to enjoy thinking of impossibly manly feats for the character to accomplish, and their zest for the job propels the movie at first.

His fellow Israelis revere him, yet Zohan is sick of the fighting in the Middle East and secretly dreams of running off to America to become a professional hairstylist. (When he informs his parents, their laughter occasions that trademark Sandler wounded-but-stoic look that says, “What’s so funny? Why are you laughing at me?”) Zohan fakes his own death and stows away on a flight to New York, armed only with Paul Mitchell’s 1987 book of hairstyles. He’s unprepared for living in a country without bombings, or working on a street where Arabs and Israelis own businesses and mostly get along. This middle section is best when the character fails to adjust, like the bit when he quiets a crying boy by putting the kid in a sleeper hold. Had the movie continued in that vein and not bothered with reality, it might have turned out all right.

Sadly, the movie goes unwatchably bad near the end, like so many Sandler comedies before it. A bumbling Palestinian cabdriver (Rob Schneider) recognizes Zohan and tries to capture him, a Donald Trump-like land developer (Michael Buffer – yes, the boxing announcer) tries to stir up Arab-Israeli hatred in the neighborhood, and Zohan has an inert romance with the hot Palestinian salon owner (Emmanuelle Chriqui) who employs him as a stylist. These plotlines fall over each other, the story bogs down mightily, and the laughs stop completely as Zohan brings his feuding neighbors together in their love for America. The wreckage isn’t as catastrophic as the last third of Click or the entirety of I Now Pronounce You Chuck and Larry, but it’s still pretty appalling.

The thing is, Sandler’s best work in this decade has been playing guys who wear their vulnerability on the outside: the deranged widower in Reign Over Me, the beta-male restaurant chef in Spanglish, the maladjusted wreck in Punch-Drunk Love. You can hardly blame him for not pursuing this direction when audiences have consistently ignored these films. (To be fair, Reign Over Me and Spanglish were bad movies through no fault of Sandler’s.) All that leaves us with Sandler’s comedies now matching his physique, packed with testosterone until bloated beyond recognizable shape. As the Knocked Up guys might say, “Oy!”