As the audience files in before the start of Amphibian Stage Production’s Gutenberg! The Musical!, the bellow of Broadway legend Ethel Merman charges out from the sound system. 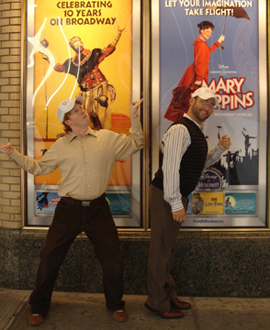 Her version of “Everything’s Coming Up Roses” from Gypsy is an excellent mood-setter for the Phibs’ latest show – Gutenberg! The Musical! – because it represents what people love and hate about the big-ticket American musical: Unfettered enthusiasm and artificial bravado, super-sized talent and obnoxious personality, unconditional embrace and merciless ambush. With every revival, the reputation of a musical depends on a chemical mix of: “You say toMAYto, I say toMAHto …”.

Speaking of raw produce, the rude, sly, and frequently hilarious Gutenberg! offers the rare meta-experience of a production throwing rotten vegetables at itself. Amphibian enlisted director David A. Miller and musical director (and onstage pianist) Aaron Fischer to helm this satirical stumble across contemporary Broadway’s most excruciating musical and lyrical habits. Full of high-flying non sequiturs and piercing wordplay, Gutenberg! was originally developed in 2003 by the Upright Citizens Brigade Theatre, the New York improv troupe that appeared for three seasons doing a sketch show on Comedy Central in the late 1990s.

Like the Upright Citizens’ chaotic TV skits, Gutenberg! and its writers – co-librettists Scott Brown and Anthony King and composer T.O. Sterret – eschew topical commentary in favor of zany brainstorms and weird juxtapositions. In the current Amphibian version, the duo of actor-singers Stephen Balantzian and J.P. Matthews sharply nail the vanity and desperation of a big-budget musical venture. While the show relies on a sparkling mother lode of clever bits, what begins as personal homage in this staging soon becomes public assassination – of the duo’s theatrical fantasies, of indulgent and undiscerning audiences, and of the post-Andrew Lloyd Webber musical model itself.

Here’s the, for lack of a better term, plot: Bud (Balantzian) and Doug (Matthews) are staging a private audition of their original, unproduced musical for interested backers who could provide the multi-millions needed for a lavish Broadway debut. The duo’s show, of course, is called Gutenberg! The Musical!, and it’s a “historical fiction” that recounts the life of Johannes Gutenberg, the 15th-century German inventor of the printing press who tangled with the medieval church over the right to mass-produce copies of the Bible. Have your toes started tapping yet? Gutenberg is a medieval titan in the cause of Western literacy. But he’s only the launch pad in Brown-King’s methodical parody of historically conscious, dull-witted, super-touristy musicals a la Les Miserables, Miss Saigon, and, especially, Phantom of the Opera.

In Amphibian’s raucous, gag-filled production, no fourth wall exists. Bud and Doug pitch everything directly and with feverishly sincere gestures at the audience. They admit to knowing very little about their subject’s life and fill in the chasms with mock-historical fancies that perfectly fit a modern two-act musical. Johannes falls in love with a grape-crushing peasant girl named Helvetica – “They named a font after her!” Bud gushes – and also clashes with a church villain, Old Monk, who has a homicidal messiah complex. Gutenberg’s incidental encounters include heart-tugging characters like “Anti-Semitic Flower Girl,” “Old Black Narrator,” and “Dead Baby.” When they need to speak or sing these different roles, Bud and Doug don baseball caps that bear the characters’ names.

Director Miller has made virtuosic silliness the guiding principle for Balantzian and Matthews. But the question “Is it funny?” is the bottom-line boundary that Miller has drawn or that the actors have drawn for themselves in their sweaty, semi-improvisational performances. Both performers hit the mark far more often they missed, and more importantly, they were able to give each bit of verbal and visual trickery its own space to allow ticketbuyers to judge for themselves. Each new audience mood establishes what direction will be taken. This is no mean feat, considering the floodgate of tomfoolery that Gutenberg! The Musical! unleashes once Bud and Doug stroll with wide, nervous grins before the audience. With wit, Doug explains a literary device: “What is ‘foreshadowing?’ … I’ll tell you later.” In artful potty-humor mode, Bud takes two baseball caps marked “Rat” and dances them around as rodent chorus singers on an imaginary, filth-covered prison floor. (A nearby baseball cap reads “Feces” and confirms that this medieval floor is, indeed, filthy.)

The main problem with Gutenberg! is that, even with an inspired pair like Balantzian and Matthews, the show runs too long at 100 minutes including intermission. Even if you thoroughly enjoy the production, a certain fatigue sets in from watching so much frantic mirth. By the DELETE’s own rules, the actors can never allow themselves to let you down – they play characters who’re trying to solicit money, after all. We get that at the start. But after an hour and 40 minutes of the comic hard-sell, your face becomes as sore as the performers’ mugs. Both of you are trying hard to smile and laugh with equal bonhomie.