In October, Josh Baish, owner of Rubber Gloves Rehearsal Studios in Denton, traveled to Marfa to catch a show by his favorite band, Boris, a Japanese experimental/drone-metal quartet that rarely visits the Lone Star State. 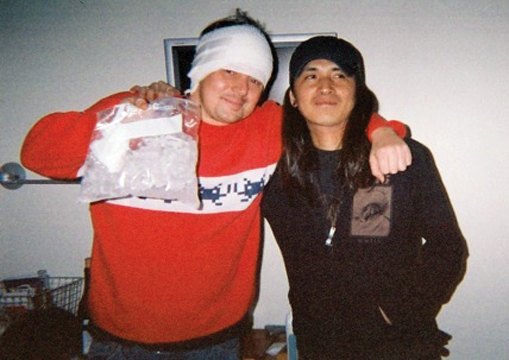 After missing the group at this past year’s SXSW music festival due to a mix-up with the set-times, Baish vowed that if Boris ever brought its trademark aural assault to anywhere in his home state, he’d be there. Unfortunately, he said, a group of locals who “didn’t know who the hell Boris was” began eyeing Baish the second he walked into the spacious Ballroom Marfa. The room wasn’t close to being full – he thinks there were only about 150 people there – which made it easy for the gang of four leather-jacket-sporting troublemakers to pick Baish out from the crowd.

To this day, Baish doesn’t know why they chose to mess with him. Maybe they were offended by the picture of his favorite metal demigods stitched onto the back of his leather jacket or by his long hair. Whatever the reason, once Boris’ set began, the men began slamming into him. The moshing escalated until he was clotheslined and knocked to the slippery, beer-soaked floor. Some of the men began kicking him while another got on top of him and sank his teeth into him.

“He just grabbed hold of my ear,” Baish said. “I could feel his teeth going back and forth.” He later found out that the men had also broken one of his ribs.

As blood cascaded down the right side of Baish’s face, ballroom bouncers pulled the men away. Baish scurried off to the foot of the stage and waited for the situation to be brought under control. He recalls someone wrapping his head up and walking him back to his nearby hotel room to wait for paramedics. “My ear’s all wrapped up, and so I go into the bathroom – and I was told not to take off the bandages – so, of course, I take them off,” he said. “Half my ear was gone!” Baish said the show’s sound engineer found the ear, washed off the mud and grime with beer and threw it in a plastic bag filled with ice. But instead of having it reattached, Baish … enshrined it behind the Rubber Gloves bar.

“It was just sitting around my house,” he said of the earlobe, “and I decided to do something cool with it.” It’s in a jar of formaldehyde, displayed along with a signed copy of the EP from Boris.

Rubber Gloves, as most local music fans know, is a North Texas indie-music institution. Over its 11 years in business, the tiny club has hosted shows by bands as far-flung as (pre-Johnny Marr) Modest Mouse and the Great Northwest’s The Shins and as regionally significant as … And You Will Know Us by the Trail of Dead and Midlake, all before they blew up. The club also now houses Strawberry Fields, one of the oldest and most respected CD/DVD retailers around that got kicked out of its previous location early this summer. 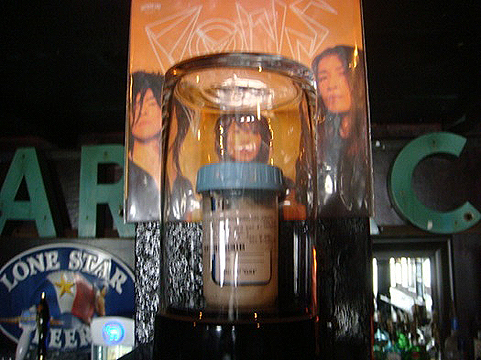 Immediately after the Marfa incident, as Baish sat in the ambulance in front of the hotel, surrounded by onlookers and chatting with fascinated paramedics, he noticed several familiar faces peering at him from the throng. “I look out the back of the ambulance, and there’s Boris, so I immediately jumped out and ran to them,” he said. “I was just gushing, you know, ‘You guys are my favorite band!’ They were more focused on the fact that I just had my ear bitten off.”

Because Marfa doesn’t have a hospital, Baish was driven to a hospital in nearby Alpine, where doctors told him the damage was severe enough that he needed to be flown to the Baylor Medical Center in Waco to have his earlobe reattached.

“I was like, ‘Wait, how much is this going to cost, because I don’t have health insurance,'” he said. “They came back and [told] me it was around $47,000 to have the procedure done.” Baish, who is by no means poor but also isn’t well off enough to cover the expenses, declined. Even though the earlobe story was, at first, told only to Baish’s friends and family members, it quickly developed, um, legs. After the incident, Boris released a 7-inch, called Statement/Floor Shaker, that includes the translated lyric: “I found a ripped ear on the floor / It must be yours.” What’s more, Baish told his story to Pitchfork Media, the premier online indie-music magazine that offers space for readers to submit their craziest concert-going experiences, and the story became an internet phenomenon virtually overnight. He said the story has since been translated into Portuguese, German, and French.

Even though Boris is part of the story, the band isn’t keen on talking about the incident anymore. “‘It was a beautiful story,'” drummer Atsuo told Baish through an interpreter, “‘and now it’s turned into something completely different.'” On Boris’ European tour, Atsuo reportedly got so tired of being asked about the earlobe that he said, “‘I’m sick of fucking talking about it!'” As for Baish’s attackers, who scattered quickly afterward, police on the scene told Baish the men are no strangers to Marfa lawmen. At Baish’s request, no criminal charges were filed at the time, for reasons that aren’t clear. However, Baish said he is now thinking about taking legal action.

On June 27, Boris played Rubber Gloves, and the line of fans waiting to get in looped from the front of the venue all the way to the back. Baish says he had to work hard to get the band booked at the small venue – the fact that his ear lobe is now part of a shrine behind the bar wasn’t enough on its own.You could say that recent gig was the silver lining of the whole ordeal. And on the personal side, Baish’s long hair covers the damage.

“It was totally worth it,” he said.