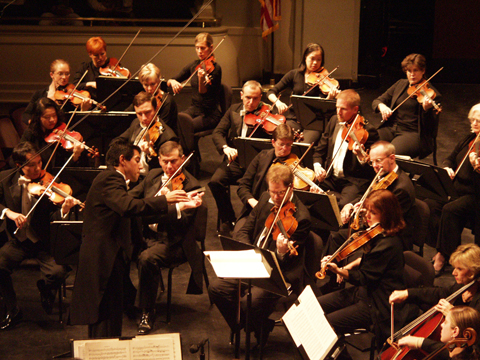 To call the Fort Worth Symphony Orchestra’s three-year Mahler cycle a once-in-a-lifetime opportunity to hear the maestro’s remarkable symphonic output isn’t far off the mark. The length and size of his nine completed symphonies make them not only expensive to trot out but difficult to schedule. FWSO conductor Miguel Harth-Bedoya began the cycle’s final installment last week at Bass Performance Hall with Mahler’s Sixth Symphony, scored for expanded strings, woodwinds in four, eight French horns, six trumpets, four trombones, a tuba, two harps, and a battery of percussion instruments on stage and off, including a “large hammer” – a sledge hammer, really – swung into a box that gives a resounding thunk when struck. The stage shell was extended to its full depth to make room for the extra forces, and it still looked crowded up there.

The first movement is a relentless splash of tonal color: layers upon layers of surging sound that all but take the roof off. The second movement relents, offering a biting parody of a country dance. It’s as if the village youngsters are being laughed at instead of encouraged for their awkward attempts at trying to mimic grownups’ dance moves. Harth-Bedoya’s interpretation was as imagistic as possible. The rhapsodic slow movement found the conductor at his introspective best, exploring the haunting buildup of the strings to their ecstatic resolution with his heart on his sleeve. The heroic last section was wonderfully majestic and moved inexorably to its curious finale: an extended, muted passage interrupted by a thundering blast from the orchestra that gently floats away. (Puccini used a similar effect a few years earlier to close the second act of Tosca. His orchestra mutters quietly as Tosca arranges the candlesticks around the dead Scarpia before erupting into a sudden crash that startles her. She drops the crucifix and slinks slowly off stage as the curtain falls, and the remnants of sound gently dissolve, a remarkably effective theatrical device in both cases.)

The following night, Harth-Bedoya offered the Seventh Symphony, a less appealing work, I think, because Mahler seems less concerned here with melody and form and more focused on sound and the varieties he can achieve with the exotic instruments at hand. Nothing lasts long. The horns and cellos talk to each other for a bit, the tuba noodles around, extra woodwinds pop in and out, and even a mandolin and guitar have brief solos, reinforcing rhythmic patterns. There are glistening moments, to be sure: a dreamy waltz-like section, a brisk march, and a triumphant finale. But for all of Harth-Bedoya’s efforts and the orchestra’s fine playing, the work wouldn’t hold together for me. (The mighty Second Symphony, “The Resurrection,” concluded the series, but a scheduling conflict kept me from hearing it.)

Harth-Bedoya is as busy here as he is elsewhere. He was in Aspen, Colo., for two weeks earlier in the summer leading the Philadelphia Orchestra, and later he led the Boston Symphony in Tanglewood, Mass., for the festival there, with an additional Los Angeles Philharmonic program in the Hollywood Bowl. After opening the FWSO season next month, the Peruvian-born conductor heads to Washington, D.C., to open the National Symphony’s subDELETEion series and goes on to work with the Chicago Symphony and then the St. Paul Chamber Orchestra in Minnesota. Later in the season, he will go to Europe to make his debut with the English National Opera in London, conducting a new production of Puccini’s La Boheme, and will continue on to Helsinki to lead the Philharmonic there, to Monaco to work with the Monte Carlo Orchestra, and finally to Geneva to lead the Orchestra de la Suisse Romande. – Leonard Eureka

Home for Wayward Comedians?
Don’t know if you’ve noticed, but comedy open-mics are few and far between. For a time a while back, Fort Worth was home to almost a handful of them, with the most popular happening on Sunday nights at the old Black Dog Tavern downtown. Running the show was local professional comedian and instructor Gary Hood, who also worked for Hyena’s Comedy Club, a laughstop with two 817 locations (Sundance Square and Arlington) and with one of the only open-mics around. Even after the Black Dog relocated to the West 7th Street area, the Black Dog show still went on – until a little over a year ago, when the bar closed.

Local pro Ken “TieDye” Mathias is looking for a new spot. He runs an open-mic at Pitcher’s Live in Arlington but said, “Most of the Fort Worth comics won’t come out to Arlington on a consistent basis, and I’d love to find an additional spot,” one closer to downtown. Mathias believes there’s a need. “Fort Worth has about a dozen ‘open-micers’ and only one place to perform per week,” he said. “With only five minutes per week of stage time, it takes a long time to build an act.”

Comedians, he continued, “need a place to work out the kinks. It has to be in front of an audience for feedback reasons. If run properly, an open-mic show can also be a lot of fun for the performers and the audience.” The ideal spot for Mathias is small-ish and has a stage, a house PA, and stage lights. “Cold, cheap beer is always a plus,” he said. The shows are usually about two hours long and attract anywhere from five to 10 performers.