The moniker “Stockyards Buddha” might be up for grabs. Fort Worth Weekly bestowed that tag on singer-songwriter Brad Hines in 2007, partly because of his kind and spiritual nature but mostly because he was built like that big-bellied, smiling, Asian guy in those statues. 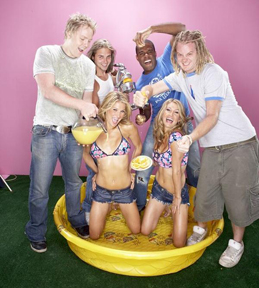 Two years and 200 pounds later, Hines is starting to resemble his former self.

A surgeon installed a silicone belt around the top of Hines’s stomach in June, a $15,000 procedure that makes him eat less and feel full sooner. He also has been eating healthier and working out at a gym, and his weight has plummeted from 465 to 265 pounds. Jeans with 40-inch waists have replaced his old 60-inchers. And he’s still shrinking. The not-too-distant future promises to reveal a 200-pound, 6-foot guy who resembles the lean, longhaired front man his fans recall from the 1980s and ’90s.

People who haven’t seen Hines at his regular Love Shack gig or at The White Elephant Saloon in a while are shocked by the difference. “I’ve actually seen some of them cry,” he said. “That feels real good.”

Seeing Hines onstage as recently as 2008 was painful. He’d grown so big it was uncomfortable to watch him set up his equipment before a show or tear it down afterward or try to bend over and fetch a dropped guitar pick or cord. People would look away or jump out of their seats and try to grab whatever he needed to spare him from having to bend over.

The surgery and life change caught the attention of saloon and restaurant owner Tim Love, along with manager Jason Tighe, and they now see to it that Hines gets regular meals of baked chicken and broccoli specially prepared at Love’s Lonesome Dove Western Bistro.

“We try to take care of Brad,” Tighe said. “He’s been out here so long, he’s a staple. Everybody loves Brad.”

Affection for his family — wife Diana and their children, Blake, 5, and Jessica, 8 – pushed him to take drastic action.

“I really would like to hang out a little while longer,” he said. “I don’t think I would be around much longer if not for this change.”

Change has come in many ways, some unexpected. He can now sit at a booth in a restaurant, something his kids always preferred but couldn’t do because their dad’s gut wouldn’t fit. He can ride roller coasters. He can move quickly. His daughter’s eyes got big and her jaw dropped recently after Hines scrambled after his son in a playful moment.

“She’d never in her life seen me run,” he said. “Even when I stand up now it feels like I have to hold myself down because I pop up so fast it shocks me.”

The weight gain began in the late 1990s, a decade marked by booze and drugs for a then-slender Hines. After he quit carousing, found religion, and settled down with a family, Hines continued his livelihood as a bar singer but quit his vices. Rich food and sugary drinks filled the void. Throw in a thyroid condition, and the first 100 pounds came quickly. The rest came with time.

“When you’re getting that big, you don’t even realize it’s happening to you,” he said.

Hines has been performing a mixture of covers and original songs for tourists and locals since 1990 at White Elephant and Love Shack and has met thousands of people along the way. Now he has to explain over and over how he lost the weight, which he doesn’t like to do unless it’s someone in need of real advice and support.

“I get tired of telling everybody about the lap band,” he said. “Everybody is always asking me how I did it. I just tell them sex. But if I see somebody who is desperate to lose weight, I tell ’em straight up. I want to help them. I would love to become an advocate for this. There are so many people struggling out there. When you get as big as I was, it’s so hard not to yo-yo. That’s where most of these people are stuck.”

Singers face an additional challenge. Losing 200 pounds changes the way a person emotes vocally. Power and range were Hines’ vocal strengths, and both suffered after the weight loss. He’s still only about 80 percent recovered vocally, he said.

“Your diaphragm doesn’t have anything to push off of,” he said. “You don’t have the control you once had. But now things are falling back into place.”