His name “gets attention,” said Andrew Disney, a Fort Worth native who’s only distantly related to the famous Disneys. “People remember it. It’s a conversation starter. I’m even in a Facebook group for people named Disney.” 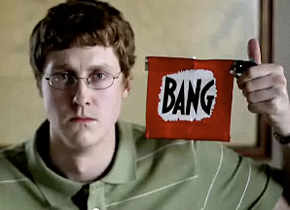 and black-rimmed glasses), but he’s no stereotypically self-absorbed, brooding artiste. Instead his manner was open and engaging as he talked enthusiastically about the films of Spielberg, Hitchcock, and Paul Greengrass. “I like film as a visceral medium,” he said. “I like to play the audience, and I love filmmakers who know how to construct their films so they can do that.”

His debut feature, Searching for Sonny, has made a huge splash before shooting has even begun. That’s because the entire movie is being shot with a DSLR (digital single-lens reflex) camera, which would be a first in cinema history. Aside from a few frustrating limitations, DSLR is a new technology that has so far shown great promise, allowing filmmakers to shoot high-definition video with a still camera. Disney’s camera cost roughly $2,500, and it films 12 minutes of full-on HD video at a time. Using multiple memory cards with large amounts of memory allows him to do a full day’s shooting.

Disney filmed a slick, humorous teaser trailer for Searching for Sonny and posted it online, where its polished good looks set the cyber–community of filmmakers ablaze. The tech web site Gizmodo hailed Disney’s “ingenious” solutions to DSLR’s exposure and focusing problems, while a DSLR story in the current spring issue of Filmmaker magazine prominently mentions Searching for Sonny. “We’ve been using the teaser trailer to raise funds for the movie,” said Disney, who plans to shoot in September. “DSLR lets you shoot in low light, it gives you vibrant colors that are way beyond what other video gives you, and you have depth-of-field focus. You can say things through film that you couldn’t before.”

Disney also notes that because DSLR requires less light, it also requires fewer crew members, which means that filmmakers can make a professional-looking movie for much less money.

The fuss has allowed Disney to take time off from his job making corporate videos for the Fort Worth multimedia design firm Kinetiq HD. Disney was still a student at Trinity Valley High School when he got into a summer filmmaking course at Italy’s legendary Cinecittà Film Studios. “I was on my own in Rome, living with two other students and a teaching assistant in an apartment,” he said. “It was the best experience of my life.”

From there he was accepted into New York University’s prestigious film program, and in 2006 he returned to his hometown to shoot the short film Frank’s Last Shot. (“I missed Texas, and I thought I’d have more freedom shooting [the film] here.”)

He edited the short while finishing his studies in New York and unveiled it to a full house at the 2007 Lone Star International Film Festival. Frank’s Last Shot went on to win awards on the festival circuit.

Disney continues to make short films for the web, but his main energy is reserved for Searching for Sonny, a hybrid of comedy and film noir, he said. “It seems like Fort Worth’s film scene is either horror or mumblecore,” he said. “I wanted to do something different.”

He sees Fort Worth as a perfect location for his project. “Instead of dark streets and alleys, I imagined this taking place in shady cul-de-sacs, country clubs, and private schools,” he said.

The three lead roles are already cast, but Disney is trying to land bankable Hollywood talent for some of the film’s smaller roles. With the national buzz already created by his footage, he thinks he might be able to launch an A-list filmmaking career from Fort Worth. In any event, this well-traveled director finds his hometown’s culture to his liking. “Here, you’re not talking about the industry every moment,” he said. “You don’t have to be so serious. Film should be fun. Plus, the weather’s better.” l