A bunch of exhibits opened up about a month ago as part of Spring Gallery Night, and while mediocrity dominates, there are some bright spots. 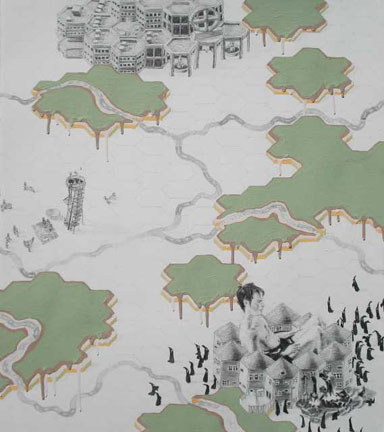 One of them is at Artspace 111. Several recent shows at Daniel and Dennis Blagg’s legendary gallery and studio have been hit or miss, long on Warhol and sweat equity but short on creative chutzpah. Sarah Green’s Right Between the Eyes: Portraits of Movie Cowboys was a collection of paintings of, well, movie cowboys taken from archival photos, Leslie Lanzotti’s Faces and the JFK Paintings was a collection of paintings of archival photographs from the era, and Ed Blackburn’s News was a collection of paintings, drawings, and prints of archival news photos. All of the work was technically advanced but not necessarily resonant: If you’ve seen one photo of JFK or Clint Eastwood, you’ve seen the paintings. The utterly rewarding 111 shows have been of the group variety, specifically the ones to which the Blagg brothers — and some other 111 regulars, including John Hartley, Nancy Lamb, and Jo Ann Mulroy — contributed pieces. J.C. Pace III: New Works is not a group show and is Warholian in nature — lots of silk screens, bright monochromes, odd materials, and even odder subject matter — but vibrant and witty. And rewarding.

Pace doesn’t work in ready-mades, meaning that he doesn’t just throw everyday objects on the wall and call what he’s done “Art.” But he is fascinated by them, namely fruits and vegetables, gardening equipment, and dead trees. His sculptures in stainless steel and bronze of avocados, lawnmowers, and other assorted seeming nonessentials come in two sizes: life-sized or toy-sized. The shifts in scale are charming. What’s not to love about little trees or little chainsaws? And the stainless-steel lawnmower hanging from a wall looks like an everyday lawnmower but one that’s been spray-painted entirely silver. You’ve got to smile.

In the spirit of Duchamp, who, sadly, is mostly known as that guy who exhibited a urinal, Pace has taken things that have little artistic value in the real, everyday world but that, when hung on a gallery wall or displayed in a gallery, can suddenly take on the majesty of an original painting or sculpture. The ready-maker’s purpose is twofold: to alert viewers to the aesthetic value of everyday objects and also point up the fact that aesthetic value in the art world today is pretty much bullshit — depending on where an artwork hangs, it can be worth as much as several thou or as little as two dirty Hamiltons. Never mind how “good” or “original” the work is.

Classicist Ron Cheek is aware of quality. With the exception of several uneventful etudes in his one-man show at the Fort Worth Community Arts Center, the Fort Worth painter’s exhibit is worth more than just a glance.

Cheek, founder of the Texas Academy of Figurative Art, paints in the high style of old masters such as Caravaggio and Rubens. The fruits in his still lifes look like real fruits, the people in his portraits look like real people, the stuff along the sides looks like real stuff. Though accomplished, the work is neither demanding nor conceptually original. As adventurous as Cheek gets here is “Don’t Do It,” a horizontal canvas of three people who could be sitting on a bench at a bus stop, all shown from the torso up. There is, from left to right, a little white girl in a sundress holding a machete and looking as if she just got caught with her hand in the cookie jar, a young, handsome African-American guy, replete with retro-‘fro, wearing an “I [heart] NY” shirt, and an attractive middle-aged white woman with dark hair, smiling wryly and cupping, Barker Beauty-like, an apple drooping from a branch above. The characters seem totally oblivious to one another. Your only excuse for looking any longer than a couple of seconds is Cheek’s undoubtedly masterful touch. Art-with-a-capital-A, however, is more than paintbrush gymnastics.

And Cheek knows. He knows that without a sense of contemporaneity — without a contemporary, ironic vibe — all of the beautiful classicist brushwork in the world would never be anything more than well-intended imitation. The answer, for him, is giving most of his portrait subjects a detached, distinctly contemporary facial expression. The man in “Lazarus’ Dream,” perhaps the artist himself, holds his chin up toward the viewer self-assuredly, looking less like a mannered Caravaggio sitter and more like the subject of an eagle-eyed Modernist photographer such as Cindy Sherman or the late Richard Avedon. Another male subject (“Contemplation”) doesn’t look as contemplative as he does shattered, head slightly lowered, brow unfurrowed, and eyes locked on something beyond the frame. Is Cheek the second coming of Caravaggio? Not at all. But no one is. Think: John Currin but way less arch.

Then there’s young Brian Spolans, whose solo exhibit of drawings at FWCAC is as enchanting as it is flat-out spooky. Hiding in Suits is The Berenstein Bears by way of the South Beach Diet, Q*bert, Chutes and Ladders, and death. Each piece offers a bird’s-eye view of a mise-en-scène involving bears, bees, Grim Reapers, and humanoid figures on a background of honeycomb shapes often pullulating with lumpy hills, laced with tiny roads, and burdened by dwellings. His palette of soft greens and beiges, with some splashes of autumnal colors, gives everything a naïve feel, and the fact that his works are done partially in pencil and partially in acrylics really amps up the impression of spontaneity. Looking at Hiding in Suits, you may get the feeling that Spolans is doing art not because he likes being an artiste but because he has to. Always a big plus. – Anthony Mariani

Former Metrognome Collective director James Watkins is a few days into his gig as the new director of the Dallas Video Festival. He comes on just as the festival is about to hold its annual 24-Hour Video Race. “We’re just getting the goodie bags together,” he said.

It hasn’t been uneventful for Watkins since Metrognome lost its space last summer. His work with homeless veterans at Metrognome and his increasing interest in sustainability led him to a sojourn to Oregon, where he completed some coursework at Lost Valley Educational Center. The school specializes in training people in permaculture, a method of designing human settlements and self-sustaining agriculture systems that imitates nature’s ecological systems.

He hopes to use that training to make the Dallas Video Festival a greener event, but that’s not all he’s hoping to accomplish. After his return to Fort Worth, he found the job opening on Craigslist. “The Video Association has been around for 20 years,” he noted. “It was a chance for me to function within a long-lasting nonprofit organization.”

His knack for building relationships with larger organizations in Fort Worth helped land him the job, and now he’ll be looking to give the event more of a local feel by including more North Texas filmmakers in the festival and hiring local artists instead of a company to design the marketing materials.  – Kristian Lin

Hiding in Suits: New Works by Brian Spolans, thru June 20.