Way back in January, I resolved that I would try to get through 2009 without writing another article about Caves Lounge. Oops, I guess. I realize it’s not the only bar in Tarrant County that’s worth a damn, but it is the only bar in Tarrant County for which I will drive 20 minutes through the cop-haunted no-man’s land of East Lancaster/West Division on a Sunday night to drink a Pacifico (or 12). But in the interest of booze-tastic journalistic integrity, I have found a truly compelling excuse to talk about my favorite bar — it’s all about the music, man. 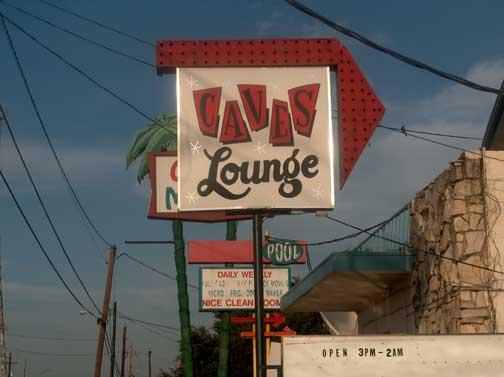 I know I’ve been a proponent of Caves’ jukebox (which you should check out, by the way, posthaste), but on Sundays, the juke, a non-internet one, thankfully, takes a backseat to live music. That’s right: Caves Lounge is now a legitimate live music venue, with, y’know, a bona fide sound system. In muso-speak, this is very important, because it translates into “Oh, so we don’t have to bring the P.A. then.” For non-musos, folks who view sunrise as a touching moment rather than a reminder that it’s time to go to bed, a sound system is what separates the clubs from the bars. Topless dancers also separate clubs from bars, but that’s a different column entirely.

I wouldn’t call Caves a club, though, and that’s a good thing — places with identity crises drive me up the wall. Caves, sure, is still the best space-age-bachelor-dive around, but branching out with shows on an off-night is a good move, keeping the regulars from experiencing live-show burnout and possibly attracting some new regulars. Plus, the shows start at 10 p.m., and they’re usually over by midnight. There are no more than three bands per bill, so you can catch some music and call it a night at a reasonable hour. Better still, all the shows are free.

Beginning with a gig by the beloved Orbans last month, Caves’ Sunday nights have featured a bunch of local acts from a variety of genres. From roots rock to indie to a teeth-rattling punk show coming up on May 31, with Hit & Run, Zombie Shark Attack, and The Dangits, Caves has something for everyone. It’s the sort of setup that makes a bar a destination — you might go to see your buddies’ band one week, but then on Monday morning, after you’ve pieced together the good time you had the night before, you’ll probably decide to go back again next Sunday, because the bands are always good, and next Sunday seems an eternity away. If church worked like that, I’d probably still own a tie.

Given the absence of a cover, the early start times, and the cheap drinks, Caves’ Sunday nights are pretty crowd-friendly. Fortunately, the club isn’t sacrificing quality to pack people in the door. So far, the bills have been pretty solid. If you’re worried about having to hear “Mustang Sally” for the nine-billionth time, you should be safe. From a state-of-the-scene perspective, it’s also really great to see another venue pop up. With the recent shuttering of The Fairmount (its impending Race Street incarnation notwithstanding) and the near-simultaneous dissolution of six of Fort Worth’s biggest local bands, we fans of music and booze need bars that support local music. Do everyone a favor and support Sunday shows at Caves. It’s not like you don’t phone it in on Monday, anyway. – Steve Steward