Boy, what an astoundingly terrible two days Chow, Baby had, the kind of days that make optimists look forward to the rest of their lives (it’s only going to get better!) and make pessimists never want to leave the house again. Funnily enough, the first day started out really great, with Chow, Baby lounging at the bar at Chadra Mezza (1622 Park Place Av) enjoying some of chef/owner Nehme Elbitar’s newest ice cream flavors (avocado honey, chocolate jalapeño, sweet corn with cinnamon, $1.90 per big scoop). Coulda shoulda just had lunch there, but Chadra Mezza is a known quantity (super-duper!), so Chow, Baby set off for new adventure. 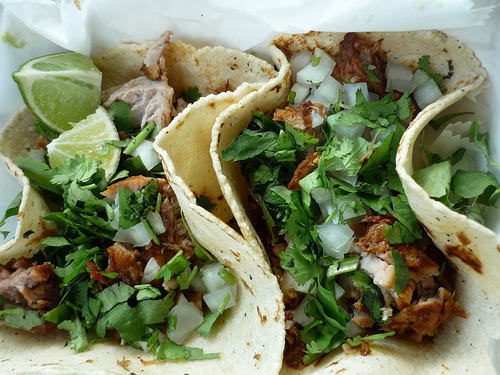 And immediately remembered why it was eating ice cream at 11 a.m.: The AC  is out on the Chowbabymobile, and it’s already 100 degrees in the lack of shade. Oh well, Pittypat’s isn’t far. This is the place that took over Nehme’s first restaurant space, on Galveston Avenue across from John Peter Smith Hospital. Chow, Baby has been hearing good things about the new café for quite a while, but had never gotten around to it … oops, too late. For Rent. Heck. But look, right across the street: Tunero’s Mexican Cuisine (1701 Galveston Av.), which from the inside makes a taco truck look roomy and comfy. Chow, Baby has been to the other Tunero location (1549 N. Main St.), and knows them to have good carnitas – ¿Que? Oh. No carnitas today. Of course. Chow, Baby made do with a very juicy barbacoa taco ($1.60) and, on the recommendation of the JPS security guard at the next table (can’t go wrong with security-guard recommendations, Chow, Baby always says), the Tunero nachos ($6.45), topped with a very nice oniony-beefy picadillo.

So, new plan: We’ll pick up some carnitas for dinner on the way home, at a new taqueria/carnicería called La Alteña (3314 E. Lancaster Av.). ¿Que? Oh. Carnitas only on sabados y domingos, like it was menudo or something. So Chow, Baby instead had a fine dinner of tender pork stew with marvelous lardy refried beans ($5.49), plus freshmade chorizo from the carnicería side ($2.75/lb). Also a Boing! guava soda whose price Chow, Baby doesn’t remember, but it seemed reasonable at the time.

Still craving carnitas the next morning, Chow, Baby and its 100-degree car headed to the marvelous Taqueria Mexicana on Collins, right across from the new stadium, fatalistically convinced it would no longer be there. As indeed it was not. But thankfully they had left a forwarding-address sign: 1407 E. Abram St. (note to Eateries near Thrifteries file: a block from a Salvation Army), in a neighborhood of run-down though not scary small businesses, most having to do with auto parts. Taqueria Mexicana even had carnitas! Alas, not the crispy-fried kind Chow, Baby adores, but rather the super-juicy pot roast kind. Though as disappointments go, this is a great one to have. One taco plate (pricey at $6.99, but with really good rice, beans, and lovely grilled onions) later, plus a pound of meat ($7.99) ordered to go for dinner and snacks, and Chow, Baby was raring for dessert. ¿Que? You’re out of arroz con leche ($1.50)? Oh goodie, another two-day, county-wide craving-quest. Chow, Baby never gets tired of those.