“Come to The Rocket,” a friend said. “It’s a new burger place on the North Side. It kinda reminds me of Casino’s.”


“Casino’s,” I should say, is Casino el Camino, an oasis in the hipster Disneyland of Austin’s 6th Street, owned by a fella I used to sell records to when we were both teenagers back on Long Island 30 years ago. The bar that bears his stage name is a remarkable simulacrum of the late, lamented Wreck Room, minus live music, plus food. Some folks will tell you that Casino’s has the best burgers on Earth — or at least in Austin. A former Austinite who now lives in the Fort has been known to take day trips back to America’s Live Music Capital of the World® just to partake of Casino’s fare. 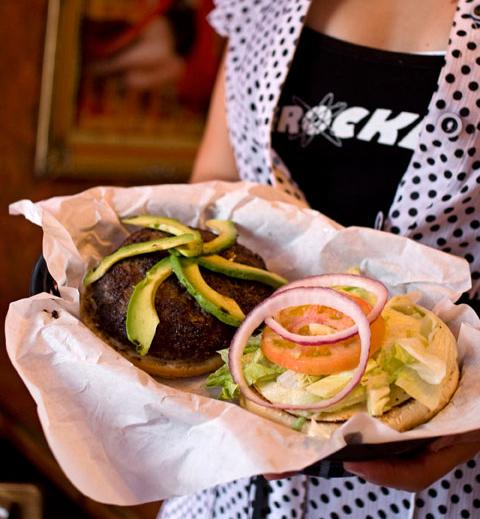 The recently opened Rocket is located on the same strip of North Main Street as Byblos Lebanese Restaurant & Hookah Lounge and the Rose Marine Theater. It’s kind of refreshing to see a new eatery open in that neck of the woods that’s neither Western themed nor Mexican — not that there’s anything wrong with the preponderance of Tex-Mex and authentic-Mex chow there. And Byblos, of course, established the non-Mex beachhead there many years ago. The Rocket, with its ’50s-retro veneer and window sign that promises cheap beer and live music in addition to “good food,” is something entirely other.

The joint’s physical layout is similar to Casino’s, with three discrete spaces for hanging out: dining room and bar by the entrance and, down a long hallway past the kitchen, a beer garden in back that calls to mind the one at Ozzie Rabbit Lodge. The Rocket’s, though, is optimistically appointed with more
picnic tables.

There’s also a rooftop beer garden that provides a decent view of downtown as well as the surrounding historic neighborhood. The Rocket’s décor is less like a rock ‘n’ roll dungeon than Casino’s. No black-painted walls, for one thing. As a matter of fact, the dining room is open and well lit, the walls adorned with Bettie Page pinup-style photos by owner Frank Ocampo’s wife Vanessa. The soundtrack is Little Steven’s Underground Garage-approved: garage-rock and rockabilly. The service on a recent visit was attentive but not obtrusive.

The Rocket’s food is simple but good. If you order cheese with your Rocket Burger, it comes inside the whopping half-pound patty, enough to satisfy even the hungriest retro enthusiast’s appetite. The grilled chicken sandwich was similarly substantial. The fries were near-perfect: big, hand-cut, mealy on the inside, golden brown on the outside. The onion rings, on the other hand, were a relative disappointment: crunchy but hard to recognize as having come from a vegetable. The cheese nachos came artfully arranged with avocado slices in the middle of the plate. The stars of the menu were the chicken wings, which were meaty, mouth-wateringly tangy, and served with a horseradish sauce instead of the customary ranch dressing. You can get them boneless, too, but where’d be the fun in that?

The place is booking acoustic acts to play on the patio (or on rainy nights in the dining room). So far, Texas Music singer-songwriter Kurt South has appeared there, and there’s open-mic night on Thursdays that includes spoken-word poetry as well as music. It remains to be seen what type of sounds and crowds The Rocket will attract, but it’s nice to see another sign of life between downtown and the Stockyards. And experienced barflies will be happy to have another spot where they can get some sustenance along with their alcohol rather than chancing the drive to the all-night fast-food joints after closing time.

The Rocket Saloon and Grill