It’s a scant half-dozen steps from the sidewalk to the front porch of the yellow brick Arts and Crafts-style house on Park Place Avenue in south Fort Worth. A little garden filled with brilliant bursts of purple, red, orange, and yellow flowers lines the pathway. For many who take the walk, those are their first steps on the road to a better understanding of themselves, to climbing out of crisis situations, to healing. 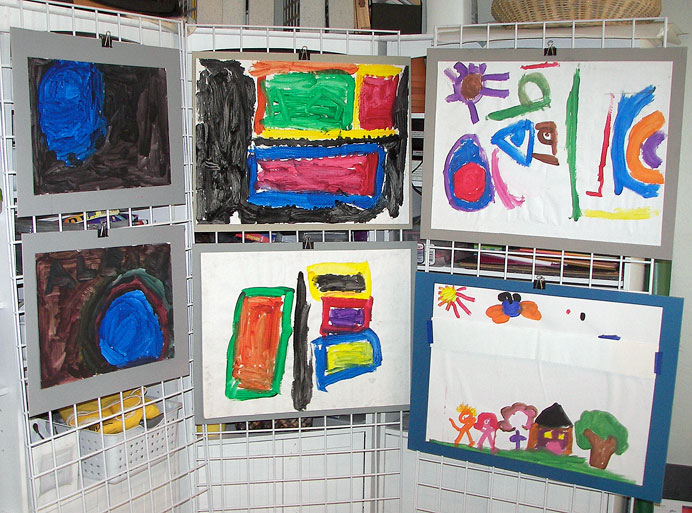 The Art Station housed in that modest building is an art therapy treatment facility, the only one of its kind in North Texas.  “A crisis is what brings people to our door,” said Jane Avila, 62, a mental health professional and the center’s founder. “It might be a school kid acting out, a teen self-mutilating, or a woman who discovers that her husband of 20 years suddenly wants a divorce. We see clients who feel helpless.”

Since The Art Station opened in 2004, those clients have ranged from 4-year-olds in a Head Start program to elderly Alzheimer’s sufferers in nursing homes. “We work with people with mental problems for whom verbal therapy doesn’t work,” she said. “We use art as a means to get them to open up, to communicate.”

At its simplest, such therapy uses the creation of art, as part of a therapeutic relationship, to help those with mental health issues grow and heal.

Take “cutters,” for instance – teens who self-mutilate by cutting or causing abrasions on their bodies, often as a way of dealing with psychological pain. Avila said she and her staff try to get them to substitute behaviors that will give them relief in a more positive manner.

“If they can begin to draw their feelings – and how well they draw or paint doesn’t matter – they can often begin to recognize how they’re feeling and why they’re doing what they do to themselves,” she said. “If they’re avoiding the real pain by giving themselves physical pain, they need to recognize that and deal with the real pain in their lives.

“When we work with Alzheimer’s patients, we find their memories improve, and they’re more alert once they begin making art,” she said. “I’m not a researcher, so I’ve never studied that, but that’s what we’re told by the people who bring us in to work with those clients.”

It’s work she loves and an option she believes is too often overlooked in North Texas. “When I was a young woman, I attended a lecture by the late Robert Ault, one of the founders of art therapy. I asked him about becoming an art therapist, and he said that since there were no programs available for that in North Texas, I ought to become a social worker and teach art.” Which is what she did. During her career as a social worker, she helped people for nearly eight years at Cook Children’s Hospital in the family therapy and psychiatry units and later at a residential treatment home. She used art to help some of her patients but still ached to become an art therapist. Two events brought that dream to fruition.

The first was the death of her son Jonathan by suicide at age 14 in 1993. “He was born premature and was sick, so he spent the first several months of his life in a hospital,” she explained. “At a time when most babies are being held by their mothers, he was in that cold, hard place. And as he grew up, he always had problems.”

Jane and her husband John did everything they were told to try to stabilize him, finally sending him to a residential facility in Idaho where Jane thought “a new and serene environment might help.” It didn’t. Several months after he arrived, he killed himself.

Three years after Jonathan’s death, an art therapist named Linda McCarley opened a school called the Art Therapy Institute in Dallas. The institute, which closed last year, offered postgraduate degrees in art therapy for counselors. “In my grief process, I took her course,” Avila said. While earning her degree in art therapy, she also came to understand how profound the work could be. “I truly believe that saved my life, because for two years after Jonathan’s death, I felt I had no reason to go on living.”

Her husband, now owner of Thos. S. Byrne, Ltd., one of Fort Worth’s oldest commercial construction companies, didn’t want Jonathan’s life to have been in vain and vowed that if he ever became successful he would give something back to the community in his son’s honor. “And then in 2003, after the company had a really good year, my husband started a foundation and bought this building to house The Art Station.”

The old building, originally one of five “bungalow” firehouses built around Fort Worth in the 1920s, had been decommissioned in the late 1950s. By the time the foundation bought it, the building needed a lot of repair.  “We had help from a lot of people,” Avila said. “A number of companies worked at cost to get this done. And later we wound up working with some of the children of those same people who helped us.”

The building is leased to The Art Station by the Byrne Foundation for very little. The foundation also gives The Art Station the proceeds from an annual charity golf tournament at the Trophy Club Country Club, proceeds that came to $23,000 last year. The rest of the funding comes from Medicare and Medicaid payments, insurance reimbursements, donations, and occasional grants. Though the staff is small – there are four full-time mental health workers and two part-timers – and Jane Avila takes no salary, it’s still not easy to cover expenses. “We manage to pay our bills. Of course the staff here is working for less than they ought to be paid,” Avila said. “But they love working here and understand the reality of the situation. They’re all fantastic.”

They see roughly 200 patients per year in-house and many more at other sites. For a year and a half, from 2006 to 2008, the organization received grant money to work one night a week at the Tarrant County Juvenile Detention Center on Kimbo Road. Avila said the young people there were her favorite population. “I never had a single problem with them. No insolence, nothing. And the staff said the therapy seemed to have a calming effect on the kids,” she said. “They said they saw less peer conflict and an increase in the population’s cohesiveness after our sessions.”

One of the key techniques Avila uses is working with mandalas, which she sees as a cornerstone of The Art Station’s therapy. “You have a blank piece of paper, and you draw a circle on it. And then you give people an intention for what they should put into that circle, that mandala: What do you want to get rid of in your life, what do you need more of in your life, what would you take if you were going to live on an island, that sort of thing.

“It just allows people to express things they might not otherwise be able to express or even know they wanted to express,” she said.

One of the mandala techniques she uses comes from Dr. Judith Cornell, with whom she studied. “She would always start with a black piece of paper with a white circle on it. And what you put into it would be in just white. Later you would use color overlays. When we work with people, we watch how the colors appear the more they open up, the more they come to terms with their situations. It’s like bringing light to the darkness.”

It may sound simple, but it works wonders, said Mike Steinert, executive director of student support services for the Fort Worth school district. “We’ve had a relationship with The Art Station for four years now through the Family Resource [Center], and we’ve got a lot of families involved. Art therapy is critical for the very young, who don’t have the verbal skills for talk therapy, and also for older kids who are shut down and won’t communicate in verbal therapy. They are a unique resource for us and for all of Tarrant County. They work with an overwhelming commitment to students and their families.”

Amanda Allison, an assistant professor of art education at Texas Christian University, teaches a course on art therapy every semester and includes a visit to The Art Station. “For many of my students it opens an avenue they wouldn’t otherwise have for future work, because with all the outstanding art programs in Fort Worth, hers is the only one devoted to art therapy,” she said.

One of Allison’s former students is studying to become an art therapist because of The Art Station. Erin Morgan began working as a volunteer at the former firehouse while studying at TCU in 2006. “I was already interested in the field a little, but no one knew anything about it, so when I found The Art Station, I started helping out, doing group work with kids, teens, and Alzheimer’s patients. I was so moved by how art therapy changes people’s lives that I moved out to California to enter a program to get a master’s in it.”

Morgan said she admires not only the work done at The Art Station, which she describes as “incredible and amazing,” but also that the center has been able to survive and thrive “in a culture that does not support art therapy.”

Avila, indeed, is worried about what will happen to it when she dies. “I’m not planning on dying any time soon, but I want to put this place on solid enough ground to know that it will keep on running, keep helping people, when I’m not around  to run it,” she said.

To that end she has semi-retired from her therapy practice – though she continues to work with several clients – and has begun spending more time looking for a good board of directors who will be able to raise the funds to keep it going. “Art therapy saved my life, and I know it has saved others,” she said. “And since we’re the only ones dedicated to it North Texas, it’s vital we stay and continue this important work.”