Clive Owen seems to be out to prove that he can be more than just Mr. Rugged British Action Star. He lightened up successfully in the under-appreciated Duplicity last spring, and now in The Boys Are Back he softens further into the role of a fundamentally decent and nonviolent man. He’s good enough in the role to make you wish that the undistinguished drama around him were worthier of his talents.


Owen portrays Joe Warr, a British sportswriter who lives and works in Australia. Joe’s gig is pretty glamorous, allowing him to travel all over the world and write about the exploits of Michael Phelps and Serena Williams, but it often means leaving his wife Katie (Laura Fraser) at their countryside home near Adelaide to take care of their 6-year-old son Artie (Nicholas McAnulty). That all changes when Katie collapses at a party and dies a few weeks afterward. In the midst of his grief, Joe reaches out to Harry (George MacKay), his teenage son from a previous marriage back in England, and persuades him to visit, get to know Artie, and pitch in with the child-rearing. 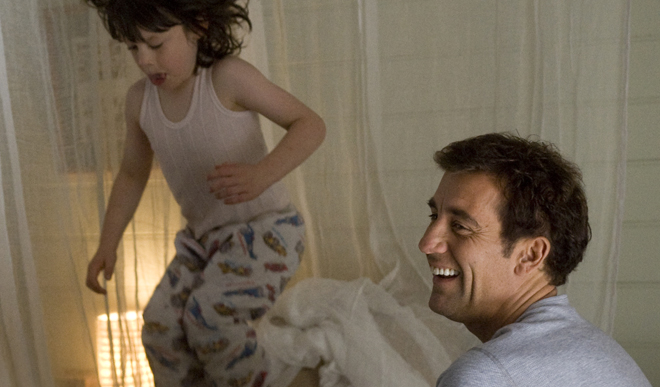 The rest of the film is about how Joe adapts to single fatherhood. Initially he adopts a laissez-faire policy toward parenting; the first shot of the film shows him driving down the beach at a fairly brisk clip with Artie riding on the hood of the car. Forced to hang out with overprotective stay-at-home mothers, he seems to delight in irritating them by letting the boys run free. “There’s one rule: You’ve got to do as I tell you,” he lectures his sons. “It’s just that I’m not going to tell you to do very much.” Supposedly he comes down from this way of thinking and becomes a more active parent, but the movie never quite gets around to showing that.

The script is based on a memoir by Simon Carr, and the book’s insights on parenting are turned into a mushy, prettified piece of soap by Australian filmmaker Scott Hicks (Shine, No Reservations). The script does have a neat little twist on the usual movie scene where a father has to choose spending time with his kids over doing his job. Instead, Joe finds an elegant compromise, albeit one that would make most sports editors blanch. Other than that, very little happens here that’s in any way surprising. The film doesn’t lag too much, but the subplot with Joe battling his mother-in-law (Alexandra Schepisi) over child-rearing feels disjointed and incomplete, while Artie’s reaction late in the film to Harry going back to England in disgrace is cheap indeed.

What little juice there is in this movie comes from Owen, who typically plays purposeful characters and gave one of his worst performances in Derailed a few years ago when trying to play a weak-willed guy in over his head. The Boys Are Back proves that he has progressed as an actor to the point that he’s credible as a decent guy who’s temporarily overwhelmed by circumstances. Gratifying though that is, it doesn’t make give this movie the weight it needs.