Last week, Chow, Baby promised to keep boring you with vacation slides of its latest international research trip, this time to the Caribbean coast of Colombia. Here’s one (an imaginary one; Chow Baby doesn’t photograph well) of lunch at Miami International Airport, where Chow, Baby always routes its international excursions so it can hit famed local Cuban chain La Carreta‘s Terminal D location.

Next trip, though, Chow, Baby will fly direct, taking along a much juicier Cuban sandwich ($6) and sugar-dusted guava empanadas ($3) from Mi Tierra Latin Fusion (603 W. Abram St., Arlington). Why go to Miami when we have great Cuban food here?

Which raises a parallel question: Why go all the way to Colombia to eat pollo frito from a street cart when Chow, Baby can get the exact same lightly spiced, crispy-skinned fried chicken with yuca fries and black beans here at Guatemala-based Pollo Campero (2830 S.H. 121, Euless)? Well, food is much cheaper in Colombia (an entire lobster grilled with butter and garlic for about $10), the locals are super friendly even if you don’t buy their trinkets, and the bougainvillea-lush colonial city of Cartagena is quaint and romantic. Admittedly, it’s pretty touristy, but just about all the tourists were South American, hailing from Bogota to southern Chile (plus a few Germans) – no fat, loud, obnoxious USians, other than the one who went around asking its fellow fannypackers, “What does ‘cabrito’ mean in your country? Uh-huh. And what’s the word for ‘lamb’? A-ha.” And that’s why Chow, Baby was in Colombia. 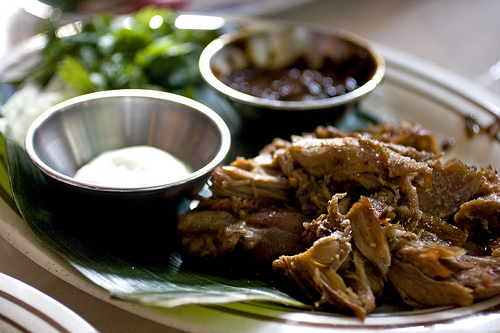 ust over a year ago, when Yucatan Taco Stand opened on Magnolia, Chow, Baby got into a little debate with two managers there over what “cabrito” means (they claimed it means “lamb” in some countries) and immediately vowed to visit every Spanish-speaking country in the world in order to prove them wrong. (On reflection, there’s probably a cheaper and/or faster way to collect such intel.) Having already been to Spain and most of Central America, Chow, Baby visited Panama earlier this year, and now Colombia, and was figuring on spring in Venezuela. But thanks to all the “Say, what do you call …” conversations it started up in Colombia’s yuppie-touristy Juan Valdez Café coffeeshops (t-shirts $15), Chow, Baby has now completed its cabrito-fact-finding mission: In every Spanish-speaking country in the world, cabrito means goat meat, not lamb. No doubt about it. Also “goat meat” in German is Zeigenfleisch.

And so Chow, Baby and its righteous certainty haughtied into Yucatan Taco Stand, which is just as trendy-cool as ever (“Coming Soon to Frisco and Southlake,” no surprise there), and ordered an ooh-you’re-gonna-get-mocked-now “Cabrito Roasted Lamb” taco ($4.50). Actually, it was pretty good. Definitely lamb, but roasted in a manner similar to how your authentic Latin restaurants, say Nuevo Leon, will roast cabrito (goat). … Wait … wait a minute. Despite the managers’ drivel, perhaps this is not a case of Yucatan’s gross ignorance of the cuisine it’s trendifying. Perhaps it’s only: a typo. Maybe they simply mean “cabrito-roasted lamb,” that is, lamb that’s roasted cabrito-style, on a par with “chicken-fried steak.” Under Chow, Baby’s generous new theory, they simply forgot the hyphen and were too embarrassed to admit it.

Kids, now do you see how important proper punctuation is? You mess up one tiny little hyphen, some nut job might obsess on you for years. But at least it was a nut job with a purpose. Now what is Chow, Baby supposed to do on vacation?