That’s what I thought about a week ago, when I first heard about the happening put on by Queer Liberaction to raise awareness of gay equality. The reality, however, was considerably different. 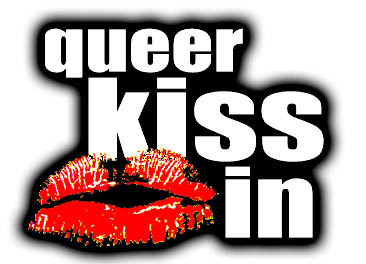 In the interest of journalism, I had grabbed my camera and pepper spray and headed out to see for myself. I could hardly find a parking space for all of the news vans and church buses. Why church buses, you ask? Because some people, particularly some fundamentalist Christians, think that homosexuality is a choice and a bad one at that. Their placards — and there were a bunch of them, most quoting Leviticus for some reason — indicated as much.

The battleground was East Exchange Street, in the heart of the Stockyards. On both sides of East Exchange were preachers and their flocks, holding placards and shouting through bullhorns in an apparent effort to annoy the gay out of the kiss-in participants, who were by the corral, shouting through their own bullhorns, and holding up equally large but much less fire-and-brimstone-laden placards. I hope everyone recycled.

The kiss-in participants seemed to be having a much better time than the demonstrators. The kisser-inners delivered some stirring speeches, and at one point Queer Liberaction’s Elizabeth Pax made a scene by trying to kiss one of the demonstrators, who not unkindly rejected her offer.

Oddly enough, the same-sex kissing was brief. I was hoping to snap some candids for possible publication in these pages, but the romantic exchanges between participants were so fleeting that I could never get to my camera in time.

After about two hours of evangelicals shouting through bullhorns and queers not making out, I had had enough. I doubt anyone had his or her mind opened, and I doubt anyone had been annoyed out of being gay. The indifferent seemed conspicuously absent. — Steve Watkins

Carroll Corner, a triumvirate of bar-bars at the intersection of Carroll and West 7th streets on the Lower West Side, will be looking a little different soon. Don’t worry, nothing’s happening to 7th Haven. The multiple Best Of Fort Worth 2009 winner stands to remain as lovable and potentially victorious as ever. Poag Mahone’s, however, will be relocated around the corner to the spot formerly occupied by Bronx Zoo Sports Café, and the bar that was supposed to open up in the Bronx Zoo spot, the Blarney Stone Pub, will be moved to Poag Mahone’s space and assume a (kinda) new name. Poag’s, by all accounts, will retain its name. The establishment that will open up in Poag’s current space on West 7th will be called the Shamrock Tavern, a version of the former bar in that spot, the Shamrock Pub. Matt McEntire, who owns both buildings, said customers still ask for him at Poag’s, hence his return to his original location. Though Poag’s co-owners will be paying more for their new space, they will get more room plus new and unused furniture and accoutrements. – Anthony Mariani