Although The Dance on Widow’s Row isn’t advertised as a Halloween show, Jubilee Theatre’s latest comic outing offers up a carnival whirl of splendidly garish costumes, the unearthly mojo of North Carolina folklore, and a quartet of women characters who share more than a passing resemblance to the succubi of medieval European folk tales. Succubi were female demons who came to men at night, had rollicking sex with them, drained the victims of their life force, and left only the brittle husk of a corpse behind. 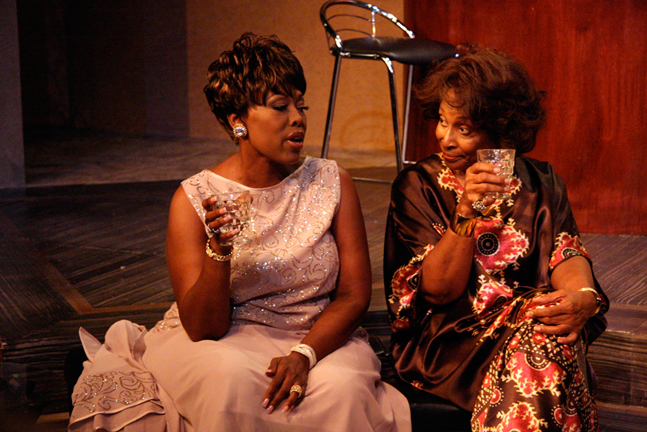 Of course, Tony- and Emmy-nominated writer Samm-Art Williams is interested in more than just a research paper on vampiric ghouls, so the playwright sets Widow’s Row in a contemporary North Carolina coastal town among a tight circle of middle-class, middle-age African- American women. Jubilee costume designer Sheran Goodspeed Keyton lavished lead characters Magnolia (Barbara Woods), Lois (Stormi Demerson), Annie (Cynthia Jackson), and Simone (Michele Rene) with draping folds of black and gold silk, starlit sequins, animal prints, and quivering bright red tassels. It was easy to picture these unforgivingly hungry women — all of them widows and each on the prowl for a man who can satisfy her carnally and financially — donning their witchy-slutty garb for a midnight dance under a full moon. Director Ed Smith guided his female stars into sweeping, occasionally snarling performances full of bubbling lust and romantic desperation, and as long as Williams’ script gave them something to work with, they were an extravagant delight. But by the middle of the second act, when it became clear the playwright didn’t know what kind of play he wanted to write, these infernal sex goddesses were abandoned to feast on slim pickings.

The coven leader on Widow’s Row is the fearsome Magnolia, who invites her friends from childhood, Lois, Annie, and Simone, for an informal evening at her house with three eligible town bachelors: Deacon Hudson (Bill Hass), Newly (a sublimely flustered Lloyd Barnes Jr.), and Randolph (Robert L. Rouse Jr., playing gallant second banana to the women). Magnolia has done her research on her targets, right down to their bank accounts and any medical history of “social diseases.” The lonely and bickering female friends hope to seduce and eventually marry the men. But Newly and Randolph are well aware of the upscale widows’ marital resumés — the four women have buried a grand total of nine husbands among them, some under suspicious circumstances. When Lois is reminded that wagging tongues insist she poisoned her spouses, she replies, “Gossip didn’t say that. The newspapers did.” Randolph has even brought a necklace of black-cat bones to ward off the curse that supposedly befalls any man who courts one of the ladies. Someone eventually turns up dead, and although Deacon Hudson is on hand to counsel everyone with the Lord’s word, it’s clear that a less than heavenly hand is at work.

The Dance on Widow’s Row bears a similarity to the plays that turned Tyler Perry from a successful theater entrepreneur to a multimillionaire filmmaker and media mogul: stories about otherwise independent, middle-class black women beset by personal woes and comically striving to regain their dignity, shot through with a peculiar mixture of church teaching and what feels like a strong gay sensibility. This is relatively new territory for Williams, whose career preceded Perry’s by many years and has been far more artistically acclaimed.
It’s unclear if the senior writer is consciously borrowing from the junior for commercial purposes.

But like much of Perry’s work, Widow’s Row suffers from the sense that the author can’t gracefully combine all of the incongruous elements at play. The supernatural themes pop up frequently but never join the plot in an organic way. The continuous scriptural references imply some kind of Christian agenda a la Perry, but a moral is never clearly stated. Williams seems bent on writing a whodunit, but he can’t satisfactorily resolve that question by the close of the show. Director Smith was left to do little but artfully design some background bits of comic naughtiness.

This being Jubilee Theatre, though, an appetizer of naughtiness can be turned into a feast of blue-humored invention, and when Woods, Demerson, Jackson, and Rene were in high mating-season gear, the theater house convulsed with laughter. To say that they performed these roles with drag queen regality is a compliment — while drag can be misogynistic, it’s more often a tribute to the kind of luxurious sexuality that these natural-born women projected with droll relish. Jackson did a terrific mid-play transformation from snooty church lady Annie to something that another character described as “Tina Turner on a budget.” With heedless vanity, Rene played the actress Simone, who claims to have performed on the world’s stages yet can cite only her appearance in a TV car commercial that most of her friends barely remember. Demerson as Lois was the most enthralling here, perhaps because I still remember the aching rawness she displayed at Jubilee in last winter’s tragedy The Bluest Eye. In Widow’s Row, she turned one part of a very physical performance — her character’s hip-swaying, high-heeled strut — into a dazzling beacon for male desire. Lois is proud of her bodacious bottom — she calls it “the swing in my backyard” — and when Demerson started that assured stroll toward Barnes as her intended prey, the poor man seemed actually paralyzed by fear and a kind of lust. If only Williams’ play had done justice to her unholy swerve for the length of the show.