Before anyone had seen Precious, it had to battle negative perceptions. People had every reason to think it would be terrible when they heard that this drama about a poor, fat, illiterate, HIV-positive girl was by a neophyte filmmaker who gave prominent supporting roles to Mo’Nique, Lenny Kravitz, and Mariah Carey. However, in the past 10 months the movie has garnered three awards at Sundance, enjoyed a rapturous reception at Cannes, and won over critics and influential celebrities like Oprah Winfrey and Tyler Perry, both of whom signed on as executive producers to help market the film.


So now Precious has to battle the opposite problem: lots of people saying it’s a masterwork. I regret to say the movie’s not that good. At the same time, I am happy to report that there is enough truth to the hype to make the movie well worth your time. 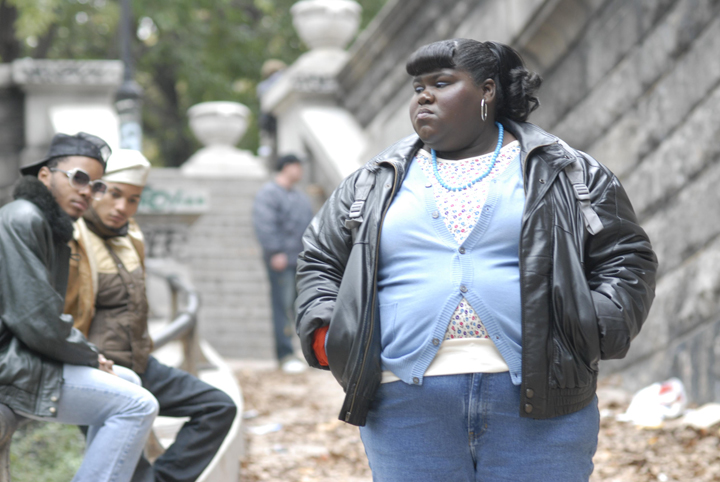 The full title is Precious: Based on the Novel Push by Sapphire, the lengthy subtitle made necessary by Hollywood putting out a superhero movie called Push this past spring. Precious is based on a 1996 book written by Ramona Lofton, a.k.a. Sapphire, who used phonetic misspellings and garbled grammar to capture the voice of a barely schooled, knocked-around teen from Harlem. The movie stays true to this, and those of us who didn’t grow up in the ghetto will not catch all the dialogue here, at least not on first hearing.

The main character is 16-year-old Claireece Precious Jones (Gabourey Sidibe), a schoolgirl in the late 1980s who gets pushed around because of her weight, though the abuse she suffers at school is negligible compared to what she gets at home. Her now-absent father repeatedly raped her since she was little, impregnating her twice and infecting her with HIV. Precious is left with her mother Mary (Mo’Nique), who inflicts nonstop verbal and physical abuse on her – when we first see her, she almost takes Precious’ head off with a heavy skillet. Life seems to hold very little for this girl, especially after she’s expelled from public school for her second pregnancy. However, the principal refers Precious to an alternative school where she finally learns how to read, write, and eventually express herself.

This is the second film for director Lee Daniels, a longtime movie producer whose directing debut, the ludicrous 2005 crime thriller Shadowboxer, tried to emulate the dreamy, heightened styles of Wong Kar-Wai and Pedro Almodóvar. Here he embraces the filth and squalor of the New York City setting with a vengeance, but he also plays against it with some plush fantasy sequences – skillfully executed and integrated – that occur when Precious copes with nasty stuff being done to her by imagining herself as a Hollywood celebrity. This canny strategy prevents the movie’s reality from becoming suffocating, and it fits the source material.

The best thing here is undoubtedly Mo’Nique. Most people know her by the brash, ballsy, genial image she projects in her standup comedy act and in films like Soul Plane and Welcome Home, Roscoe Jenkins. Those few of you who saw her in Domino and Phat Girlz know that she can give a more subdued performance. So she does here, even though she’s playing a full-fledged monster. Watch the scene in which she sits on her couch holding her Down’s syndrome-afflicted granddaughter while talking to a visiting social worker. The camera placement doesn’t play this up, but you can still see Mary caressing the kid lovingly whenever the social worker is watching and holding the kid like an old trash bag the rest of the time. She doesn’t quail, not even during a scene between Mary and Precious’ newborn baby that’s almost too awful to watch. The film climaxes with Mary being confronted by a different social worker (Carey, unrecognizably deglammed and strong in her role) about all the horrible stuff that she’s done. The scene is blatant Oscar bait, yet that doesn’t lessen the impact of Mo’Nique’s performance as the unrepentant Mary nevertheless pleads for understanding and forgiveness.

Because this movie’s heart is in the right place, its flaws have gone largely unmarked. I wish the film didn’t underscore its big emotional scenes so obviously, and I wish the gay teacher (Paula Patton) who transforms Precious’ life wasn’t so idealized that she practically floats through the halls. The movie has earned much of its praise for giving dignity and humanity to the character of this coarse, overweight girl, and yet her deliverance comes too easily. Precious seems to go instantly from sounding out words like “the” to writing poetry in her journal; a bit more emphasis on the painstaking work that goes into achieving literacy would have made her a much more moving figure.

So the movie skirts some issues. However, that shouldn’t obscure Precious‘ achievements. Compared to Tyler Perry’s movies, this is far more searingly honest about the consequences of poverty and abuse. (Perry deserves credit for recognizing this, too.) American multiplexes have become a rather inhospitable place for this type of drama that challenges the audience rather than gently washing over it. Precious‘ willingness to do so and its largeness of spirit aren’t enough to make it a great movie, but they do make it welcome in our theaters.

Precious: Based on the Novel Push by Sapphire