The opening credit sequence of Pirate Radio fooled me momentarily into thinking I was being shown a trailer for the movie rather than the movie itself. This fatally innocuous British comedy uses zippy editing, frames within the frame, and overexplicit text to explain that it’s set in 1966, when the British government banned rock music from the radio, forcing the public to listen to The Who and The Rolling Stones from unauthorized broadcasters.


One such is Radio Rock, which sends out its signals from a large fishing boat in the North Sea. The movie gives us no backstory about how Radio Rock’s people met one another or how they got such a big boat. Instead, our way into the story is Carl (Tom Sturridge), an expelled boarding-school student whose mother has sent him to Radio Rock to be supervised by his godfather (Bill Nighy), who runs the operation. Carl’s supposed to be getting straightened out, but the crew – led by an American DJ who calls himself The Count (Philip Seymour Hoffman) – gleefully introduces him to sex, drugs, and rock ‘n’ roll, not necessarily in that order. 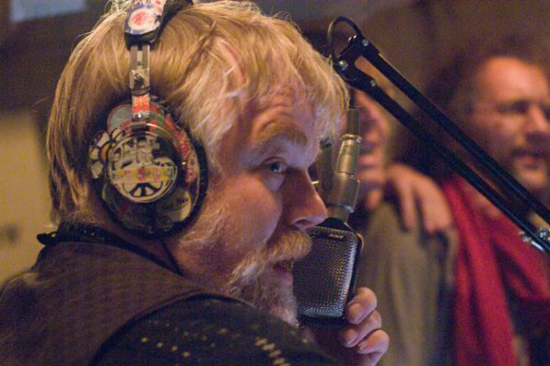 The movie’s supposedly based on a true story, but the characters are all fictional, and rock music was never banned from British radio. This is the second movie directed by Richard Curtis, who adopts a much less glossy visual style than he did in his first film, Love Actually. He scores whole scenes to specific period songs, most of which aren’t exactly hurting for exposure (“Jumpin’ Jack Flash,” “Ooo Baby Baby,” “Wouldn’t It Be Nice”). Clearly, Curtis loves his collection of old records as much as Cameron Crowe loves his. The difference is that this movie’s sloppy structure makes it seem like he wrote the screenplay around his favorite songs instead of fitting the songs to the script. Characters named Marianne and Elenore are introduced just so they can be serenaded by the music of Leonard Cohen and The Turtles.

All the nostalgia weighs down this already overloaded ship. Subplots are introduced, dropped, and then resolved way too easily, like the one about a portly DJ (Nick Frost) who steals away Carl’s prospective girlfriend, or The Count’s rivalry with a flamboyant jockey who comes out of retirement (Rhys Ifans), or Carl’s discovery that his biological father is someone on the boat. None of them carries any sting, not even the plot about the Irish DJ (Chris O’Dowd) whose whirlwind marriage to an American girl (Mad Men‘s January Jones) cruelly falls apart in 17 hours. A cabinet minister in London (Kenneth Branagh) occasionally turns up on screen, vowing to shut down Radio Rock for no reason other than he’s a meanie who hates music. We can’t take this character seriously because he has a henchman named Twatt (Jack Davenport).

The acting and comic writing, historically a strength of Curtis’ productions, are subpar here, and yet something even more important gets lost. Curtis clearly loves the outlaw chic of his ragtag bunch of heroes, yet his film about them is as civilized and conventional as a Merchant Ivory period piece. For a movie that aims to celebrate the undying rebellious spirit of rock ‘n’ roll, Pirate Radio is way too tame.