Think about the Fort Worth dining scene over the past two decades. More than likely, at least one of your favorite restaurants has been a casualty of the economy or of changing tastes. Over that time, Café Aspen’s tables have remained fairly full of Westside ladies who lunch, which might be a testament to the restaurant’s enduring popularity or to the fact that the menu hardly ever changes.


In October, though, longtime chef J.D. Loy and wife Suzanne formally took charge of the Westside eatery from founder David Rotman, and they did make some changes – big ones. The dining room looks completely different. The circular table weighed down by beautiful desserts is gone, and sleek stained concrete and earth tones have replaced the black and neons, lending the place a more contemporary, less mid-’80s feel. 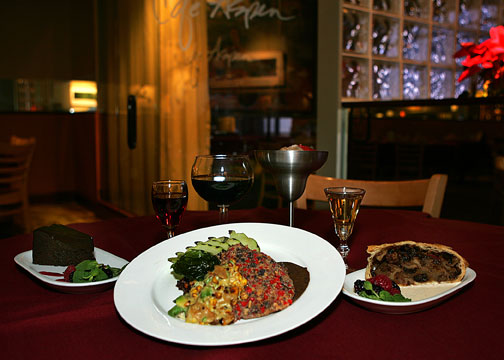 Chef Loy also has radically changed the menus for both dinner and lunch. One nice feature about the new dinner menu is that each entrée comes with a substantial side dish, and the new lunch menu now features several salad-plus-protein options.

“If we can’t get fresh fish, we don’t use it,” said our server on a recent visit when asked about the braised Alaskan halibut,  on the café’s web site menu but not on the evening’s on-location bill of fare. At the time of our visit, halibut season had just ended, although I’m sure frozen halibut was available. But it’s not likely that frozen anything is going to appear in Café Aspen’s kitchen.

The new menu was accurately described as “meat-centric” by my dining partner: a lot of beef, duck, pork, and lamb — even some antelope. However, there are at least two fish dishes and a veggie plate as well.

We started with the spicy tortilla soup. Don’t expect a chicken-based, soggy tortilla bowl. The chile-kissed, creamy soup was puréed, saving it from being too rich, but it was also delightfully smooth: It didn’t contain any discernible chunks of carrots, chicken, or tortillas. The warm caprese salad was a little off-putting. The tomatoes were grilled but came out room temperature — I was hoping for slightly more heat to melt the beautiful mozzarella. However, the heirloom tomatoes were incredibly meaty and fresh, and the little strands of fried basil that decorated the top were fragrant and tasty.

The luscious cherry sauce coating the grilled lamb chops perfectly complemented the medium-well meat. Loy paired the lamb with a slightly sweet roasted winter squash. Generally I can take or leave the starchy veggie, but perhaps due to the brown sugar, the side was exceptionally yummy. A nice option on the new menu: You can get the lamb chop single or as a pair, depending on how hungry you are.

The beef tenderloin fillet came perfectly cooked and bathed in garlic butter (even though, really, buttering your steak is unnecessary). The fillet was absolutely succulent and just slightly past fork-tender. I know Fort Worth is Cowtown, but I’d put Loy’s fillet up against any famous local steakhouse’s offering. A bonus: The beef comes with a mac-and-blue-cheese side that managed to be unbelievably fancy (courtesy mainly of the truffle oil) yet comforting. Also along for the ride were some green beans — but not your mama’s. The only thing adorning them was a little melted butter, which rendered them absolutely perfect.

Café Aspen has long been known for desserts, and that hasn’t changed. We tried a flourless chocolate ancho-chipotle truffle cake, which was the perfect combination of bittersweet and zesty. My dining partner commented that the dish might be too spicy for someone with a tender palate. Fortunately, the menu also offers a sweet, tangy, layered lemon coconut cake, which was cool and simple.

The service at Café Aspen was extremely attentive. And it’s good to eat at a place where the chef cares as much about what’s good for sustainable food production as he does about what the plate looks like going out.