We all know how important Michelangelo is. He painted a massive fresco on the ceiling of the Sistine Chapel for, uh, Pete’s sake, sculpted totally buff nudes out of marble (who knew that 24 Fitnesses existed back then?), designed buildings, wrote poetry, and did a bunch of other heady stuff. The Kimbell Art Museum’s relatively recent acquisition of the Renaissance master’s earliest known painting, “The Torment of Saint Anthony” (circa 1487-88), was a real art-world coup. North Texas’ only museum devoted to world art effectively beat out the monstrous Metropolitan Museum of Art for the pleasure of purchasing the piece to the tune of … an undisclosed amount. (Think: zillions.)

Even if you’ve never stood in front of a significant artifact and been wowed, you probably will be before “The Torment of Saint Anthony“ (now hanging in a Kimbell side gallery). 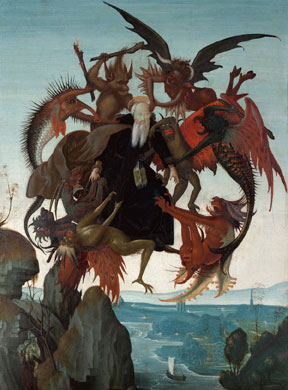 At the center of the small piece in oil and tempera on a wooden panel hovers a slightly annoyed-looking, balding old man sporting a dark habit and long, bifurcated white beard. He is clawed at and clubbed by a horde of fantastical, often spindly tailed, often horned, often bearded, and definitely homicidal ghouls, all seemingly resembling some of Dr. Moreau’s gravest mistakes. One ghastly creature has squid-like wings and a beetle’s pincers. A couple others look like fanged monkeys. Another has an aardvark’s snout, human arms, and a fish’s body and scales, shaded from shadowy black to silver. The master had studied the deceased aquatic offerings at a local market to get the fish-demon’s “skin” just right, according to Michelangelo’s biographer and former pupil, Ascanio Condivi. Michelangelo based his piece on an engraving by 15th-century German master Martin Schongauer, whose original is more detailed and busier than the Italian master’s but not as rich — Schongauer’s is in black and white, Michelangelo’s in lush color.

The demons are rendered primarily in browns, blacks, and reds. Beneath the saint’s tiny feet are some similarly hued jagged rocks, whose color and placement essentially balance and frame the airborne attack. The swirling, centrally located darkness is highlighted by the background: a balmy light-blue sky and, beneath, a winding light-blue river upon which a distant sailboat travels unaware of the terror above.

The painting is in High Renaissance style: posed and not photorealistic, which doesn’t distract the viewer from the Christian symbolism that defines the piece and also most of the era’s artwork. Arguably self-centered art for art’s sake wouldn’t come around until centuries later. Art always had to be about something, and what “The Torment of Saint Anthony” was about was piety, unflinching devotion to God in the ugly face of oppression. The message: If some old man could remain in contemplative, prayerful reflection while being torn apart and bludgeoned by demons, the average Renaissance Italian could remain pious despite his or her sinful cravings.

An isolated figure amid chaos would become a motif in Michelangelo’s work. In “The Last Judgment” on the altar wall of the Sistine Chapel, Jesus is centrally located and surrounded by the souls of humans to be judged, among others, and in the Italian master’s “Battle of the Centaurs,” the mythological hero Hercules is beset upon by the titular beasts.

“The Torment of Saint Anthony” is the first Michelangelo to enter an American collection and one of only four known easel paintings of his to exist. A couple of years ago, the piece underwent extensive conservation treatment at the Met, where the piece was first exhibited before heading to the Kimbell. Yellowed varnish and “disfiguring overpaints” were removed, allowing the painting’s piercing colors and textures to shine. Some scholars questioned whether or not it was an authentic Michelangelo. The Met’s work, though, offers a stern rebuttal. Through infrared reflectography, the conservation team was able to uncover original brushtrokes and prove that Michelangelo elaborated on the piece, changing dimensions and positions here and there.

At the Kimbell, panels in which some of the Met’s technical wizardy is explained hang on the three walls around the piece — the prized possession has a wall all its own, of course.

“The Torment of Saint Anthony” by Michelangelo