The half-destroyed brick buildings at the top of the rise overlooking the rest of the Fort Worth Stockyards have seen plenty of history. The old Swift and Company meat-packing plant employed 1,700 people during the area’s heyday, watched over the district’s decline in the 1960s and ’70s, and was twice gutted by fire but refused to fall even to the wrecking balls hurled against it. 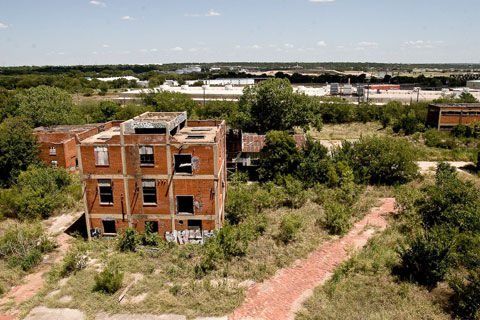 Since then, while the rest of the Stockyards was coming back to life as a tourist district full of restaurants and shops, the Swift plant has been slowly returning to nature, time beginning to accomplish what fire and wrecking crews could not. It’s become a haven for graffiti taggers, a plot of urban wilderness routinely explored by teenagers and photographers (including this reporter) and occasionally by film crews looking for bombed-out, third-world backdrops.

In the next few years, however, the century-old buildings could find some new life, as an urban-chic complex of residences and retail businesses, courtesy of the some of the biggest players in the current Stockyards renaissance.

Gary Brinkley, general manager of Stockyards Station, which owns the former meat-packing plant, said the property will be converted over the next seven to 10 years into a mixed-use development, utilizing the existing structures as much as possible.

“That is what makes this location special,” Brinkley said. “Otherwise, it’s just another piece of land. It could be anywhere.”

Stockyards Station is the brainchild of Holt Hickman, a major property owner and mover and shaker in the Stockyards and elsewhere in Fort Worth. Local historians, who had not heard of the proposed redevelopment of the old Swift plant, were wary but acknowledged that Hickman’s other projects have done a good job of preserving the area’s history. The Stockyards Station, for instance, is an 85,000-square-foot complex that originally consisted of cattle pens but now houses shops and restaurants in the heart of the district.

“I’m not sure I like that,” said Joni Wells, director of the Stockyards Museum, when told of the plan for the old Swift complex. “We need more accommodations,” she said – that is, hotel rooms rather than condos or apartments.

Local architect and historian John Roberts said that because so little is left of the meat-packing buildings, their preservation may still have historical value but not much architectural merit. “The unfortunate thing is that the buildings now are in such a state of ruin that they are probably not architecturally significant anymore,” he said. “They do serve as kind of an interesting [example] of urban grit with the graffiti and demolition, and there still is a historical significance.”

He seemed intrigued by the idea. “I wonder if they could actually pull that off,” Roberts said. “If you’ve seen the old photographs, there is quite a collection of buildings on that site, of all ages and styles.” In other cities, he said, “meat-packing plants and grain elevators were built to last, built to withstand catastrophic events.”

Historians and others probably have plenty of time to debate the details of what will happen to the property. Brinkley said no actual plans have been drawn up, and he acknowledged that the current economic downturn may slow the project.

Between the ruined plant and the active part of the Stockyards, the original Swift headquarters building – renovated decades ago as a Spaghetti Warehouse restaurant – has recently been meticulously restored again as offices for XTO Energy.

Across Niles Road, however, a walk through the old plant itself makes it hard to believe you are still in Fort Worth. The property consists of 22 acres of crumbling buildings, overgrown brick streets, and rusting railroad tracks. Cacti and other plants grow on roofs, and graffiti covers much of the buildings. Film-crew debris shares space with much older litter. Views from atop the tallest buildings are breathtaking. 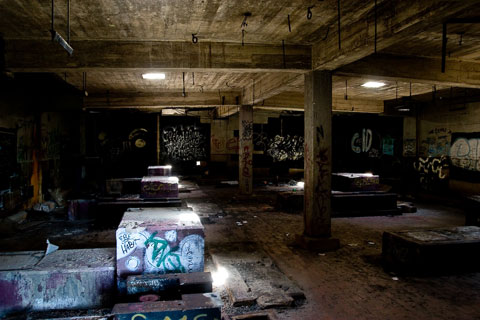 Pete Rearden, a local photographer and artist, said that he spent the better part of a month exploring and extensively photographing the ruins before they were fenced off and the no-trespassing sign went up. “I have mixed feelings about [the conversion to mixed use],” he said. “Part of me thinks that we do need the renovation, while part of me thinks that we should make it safe and then open it up as a park.”

The plant opened during the Fat Stock Show of 1904. Seven years later, the stockyards area was incorporated as Niles City, a town of less  than one square mile that became known as the “Richest Little City in Texas” and the “Wall Street of the West,” with its own fire department, schools, and law enforcement. Then a new state law was passed that allowed larger cities to forcibly annex smaller towns, and in 1923 – after a prolonged legal battle – Niles City became a part of Fort Worth.

The Swift Company invested heavily in many Fort Worth businesses, including a bank, a cattle loan company, a railway company, and a publishing company. It shared ownership of the stockyards with rival Armour and local businessman Greenlief W. Simpson.”When the packing houses were here with all of the cattlemen,” said Wells, “it brought a tremendous amount of income into Fort Worth. There were good times and bad, but even during the Depression, the Stockyards paid a dividend, and they were always in the black until in the 1950s and ’60s.”

Swift provided medical care, emergency leave, and a pension plan for its workers, part of the reason its employees chose not to participate in union strikes in 1949 and 1952. As business declined in the 1960s with the advent of more localized feedlots and meat-processing plants, workers took voluntary pay cuts to help keep the plant operating. But it wasn’t enough. The Armour plant closed first, in 1962, and in 1971 the Swift plant shut its doors for good.

The destruction of Niles City’s former city hall in 1975, to make way for a parking lot, served as a wake-up call to local historians that the heritage of the Stockyards needed to be protected. Charlie and Sue McCafferty founded the North Fort Worth Historical Society, which was able to get the Stockyards declared a national historical district, helping save the remaining structures. In the 1980s, federal grants financed major progress in renovating and preserving the district.

Conservation efforts, however, came many decades too late for the Swift plant. The empty buildings were gutted by fires in 1971 and in 1973. The latter blaze, fueled by 70 years’ worth of animal fat, burned for three weeks. Afterward, owners hired a company to demolish what was left, but after breaking three wrecking balls on the massive brick structures, Hearne Wrecking and Lumber admitted defeat.

The site has provided the backdrop for episodes of two popular TV shows: the long-ago canceled Walker, Texas Ranger and the recently canceled Prison Break. Signage from Prison Break still hangs on the cattle barn (used as the location for the main prison building).

It was a dangerous place to shoot. Since some of the buildings extend far below ground level, there are holes as deep as 60 feet for the unwary to fall into, and wild dogs, snakes, foxes, and bees inhabit the complex’s multiple caverns. Due to such safety concerns, Fort Worth police now arrest trespassers.

Randy Hearne, whose company provided security services during the Prison Break filming, said his crew came across an open manhole. “We dropped a rock into it, and there was a three-second delay before we heard the rock hit bottom,” he said. “We had the production company cover the holes in the area where they were filming the next day.” Coincidentally it was Hearne’s uncle’s company that made the ill-fated attempt to demolish the buildings decades ago.

One local photographer who asked to remain anonymous said he’s unhappy at the idea of the mixed-use development. “I’ve seen what happens when they try to restore those old buildings, and it takes the soul away from them,” he said. “I agree something needs to be done to make it safe so that people can go there to see how the buildings were built, [but] I think that turning it into mixed-use kills any interest the site holds.”