The parents of Michael Jacobs Jr., killed last April by a Fort Worth police officer wielding a Taser, have never been satisfied with the police department’s handling of their son’s case. But now, they believe, something good may have come from his death.

Local black and Hispanic leaders announced this week that a historic coalition of black and Hispanic groups has been formed to promote human and civil rights in North Texas. The coalition includes the Fort Worth branches of the National Association for the Advancement of Colored People, the League of United Latin American Citizens, and the Southern Christian Leadership Conference. It is the first time the three groups have formally come together anywhere in the country. 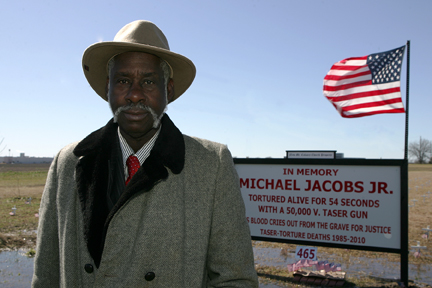 “We have worked together on isolated issues before,” said Hector Carrillo, director of LULAC’s 21st district, which includes Tarrant, Parker, Johnson, and Wise counties. “But we’ve never come together like this, to develop strategies that will aim to effect changes in governmental policies. And the killing of Michael Jacobs was the spark that we rallied around to develop this coalition.”

Jacobs suffered from a bipolar disorder. The 24-year-old black man was tasered by a police officer responding to a call by his father, Michael Jacobs Sr. Police had been called to the house before, when the younger Jacobs got off of his medications. This time, when Jacobs refused to get into a police car, the officer fired her Taser, hitting him in the neck and keeping the trigger down for 49 seconds. According to official statements, she said she had not meant to keep the trigger down on the 50,000 volts of electricity. But after releasing the trigger, she hit him again with a five-second blast.

Jacobs began having difficulty breathing and died a short time later. Tarrant County Medical Examiner Nizam Peerwani ruled the death a homicide and listed the cause as “sudden death … due to application of a conducted energy device.”

Despite the ruling, a grand jury declined to indict the officer. And Fort Worth Police Chief Jeff Halstead did not punish the officer. Civil rights leaders were outraged.

“That must have been the first time in the history of Tarrant County that a ruling of homicide did not result in an indictment,” said the Rev. Kyev Tatum, president of the Fort Worth branch of the SCLC. “And it was not just the failure to indict or dismiss the police officer that got to us,” said Tatum. “It was the way the city of Fort Worth and the police department acted toward the Jacobs family. 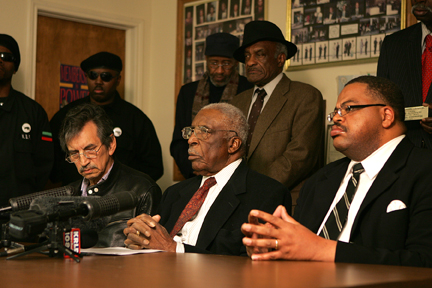 “They showed no compassion. Here a mentally challenged young man who was unarmed and no danger to anyone was shot and killed with a 54-second jolt of electricity, and no one has even said they’re sorry. Michael Vick went to jail for electrocuting dogs, and people went crazy over that. But we allow police to electrocute people. Something is not right with that picture, not in a civilized society.”

The grand jury decision led to a protest, which included the Rev. Tom Franklin of the New Mount Calvary Baptist Church in southeast Fort Worth. Franklin had been upset about the widespread use of Tasers in Fort Worth and across the country but didn’t know what to do about it.

“I wanted the Jacobs family to have closure, and I wanted people to remember that death,” he said. After the protest, Franklin returned to his church and wrote Michael Jacobs’ name on a cross he’d made that was used in services. Not long afterward, he planted it on church grounds. Behind it, he began putting foot-tall white wooden crosses in memory of Jacobs and others who have died after having been tasered.

Marcus Hardin met Franklin through Tatum. Hardin’s grandson, Marcus Swiat, had been tasered for 40 seconds after a vicious beating by Fort Worth police officers in 2007 – all of which was caught on videotape and led to Swiat being found not guilty of charges of assaulting a police officer and public intoxication. When Hardin saw the Taser memorial that Franklin had begun, he decided to help make it into a national memorial. Together, Hardin and Franklin began making crosses to represent all the people in this country who have died after being tasered. When they started in late 2009, the number was 465; the memorial is now up to 471 crosses.

“The fact is that tasering is torture,” Hardin said. “I was an electrical contractor for 40 years, so I know what electricity feels like. And anyone who says being hit by 50,000 volts of electricity is not torture is lying.”

Hardin became good friends with Tatum and got to know Carrillo as well. It was Hardin who suggested that their voices would be stronger if they worked together in trying to get Tasers banned in Fort Worth. And they would be stronger still if they could get the NAACP to join with them.

“Now that they’ve signed that agreement to work together, politicians won’t be able to ignore them,.” Hardin said. “They represent too many voters.”

Banning the use of Tasers by the Fort Worth Police Department is the first goal of the new coalition. And a recent ruling by the 9th U.S. Circuit Court of Appeals might go a long way toward seeing that goal become a reality.

The ruling was handed down in December by a federal appeals court in California. The case was based on an incident in which a Coronado, Calif., police officer tasered an unarmed, emotionally troubled man who was not posing a threat to anyone. The man, Carl Bryan, fell face first on the pavement, shattering four of his front teeth.

Bryan sued the officer, the Coronado Police Department, and the city, alleging that the excessive force violated his Fourth Amendment rights. The trial court ruled in Bryan’s favor, and the appellate court agreed.

The ruling, if it is affirmed and adopted by other courts, would make individual police officers, their departments, and the governing bodies that employ them responsible for injuries sustained by people who have been tasered. It is expected to set a precedent that could force police agencies to revise their policies on the use of Tasers.

“We’re hoping that ruling either gets Tasers banned in Fort Worth or limits their use to life-and-death situations,” said Hardin, who has vowed to his grandson that if he lives long enough (he’s 80), he will put Taser International out of business.

“Brother Hardin is right,” said Tatum. “Tasers are torture, and torture has no place in a democracy.”

The new coalition may take on other civil-rights related causes as well.

“We will be working toward civil rights and human rights,” said Nehemiah Davis, president of the Fort Worth branch of the NAACP. “And we will be working at voter registration and getting out the vote. As you know, any politician will pay attention to anyone who can produce a good amount of votes.”

Carrillo said the coalition will also work “on institutional racism, on immigration protocols, on the incarceration of illegals, on civil rights. There are so many issues that negatively affect the black and brown populations, not just here in Fort Worth but all over the country.”

At the news conference on Monday at which the coalition agreement was announced, Tatum added issues such as education, economic development, and the quality of schools in minority neighborhoods to the list. “We come together because of common pain,” he said. “The African-American community can empathize with the Latin community on the issue of racism.”

“We want to serve as the example for the state and the country, to show that these groups can find meaningful ways to work together” to support public policies “that encourage respect for human dignity regardless of race or religion,” Tatum told Fort Worth Weekly.

Michael Jacobs Sr. said he hopes the coalition can bring about some much-needed changes. “I only wish my son didn’t have to die for that good thing to have happened,” he said.

“They keep telling people that Tasers are less lethal than guns,” he said. “Now my son wasn’t doing anything to anyone when they killed him. But if that officer thought, for whatever reason, that she needed to use force on him, I wish she would have just shot him in the leg with a gun. If she had, he’d still be here.”