Tommy Wayne Atkins, bassist for the Fort Worth experimental hard-rock trio The Great Tyrant, was found dead at home last Thursday afternoon. His two longtime friends and bandmates, Jon Teague and Daron Beck, worried when he didn’t show up for band practice Wednesday night, and Teague became more concerned when the manager of the Half Price Books where Atkins worked called Thursday to ask if he’d seen his friend. Atkins had struggled with depression for years. His trough of despond was deep, and he left by his own hand. 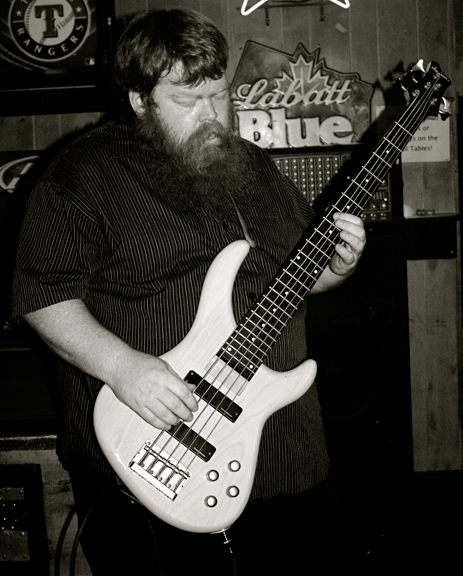 Atkins was revered by his musical peers for the monolithic wall of sound that issued from his Sunn bass amp and his somewhat menacing, monk-like stage presence. Atkins’ favored tone was the deepest and darkest tectonic rumble imaginable, one that you felt through your solar plexus before you heard it. He and Teague, who’d played together for half their lives, formed the heaviest — and, some would argue, the best — rhythm section in town. When they interlocked their syncopations, you could imagine them conjuring a lumbering behemoth — and making it dance. On his own, Atkins recorded atmospheric ambient soundscapes under the rubric The DSA Working.

Since coalescing in early 2006, The Great Tyrant blended gothic horror and doom-metal influences, played hypnotically theatrical live shows, and wrote and recorded a steady stream of new material. To date, only a 7-inch single and four-song EP (2007’s Candy Canes) have been released. In the wake of Atkins’ passing, Teague and Beck announced that they will continue performing together but not as The Great Tyrant. “This isn’t the kind of band where anyone can be replaced,” Beck said.

They plan to release the two albums completed with Atkins, as well as some of his solo music. “Thankfully,” Beck said, “everything we wrote together was recorded.”

Last Sunday, a benefit show to raise funds to cover Atkins’ cremation costs was held at the recently refurbished Kessler Theater in Oak Cliff. The event was organized by Darktown Strutters chanteuse Kara Howell, who managed to negotiate free use of the theater, the services of 13 bands, a DJ, projection artists, Gutterth Productions‘ P.A., and food from an Oak Cliff pizzeria on just three days’ notice. Friends of Atkins will gather to share memories of him on Sunday at Lola’s Saloon-Sixth, and another memorial show will be held there in May. Donations are being accepted via a Paypal link: http://www.tinyurl.com/TommyAtkins.

“This broke our hearts,” Beck said. “We really loved Tommy, and we knew he had a lot going on in his head. He was a crazy, private genius: super-intelligent, soulful, and sensitive. The outpouring of support since this happened has made us realize that a lot of people cared a lot more [about Tommy] than we knew. But he always viewed himself differently than other people did.”

Atkins was a shy and private individual; a connoisseur of challenging music, film, and literature; and a generous spirit known to his friends for his searching intellect and quiet humor. His departure leaves a hole in the local musical landscape — and in the hearts of his family and many friends — that will never be filled.