Every so often, Heisenberg’s 1927 principle of uncertainty –– a foundation of quantum mechanics –– pops up as a theme in art. The Coen brothers’ acclaimed recent comedy A Serious Man depicted a Midwestern Jewish professor who tried to teach this tenet on the inscrutability of the universe to his students even as his own life cruelly fell apart.

Heisenberg wrote of subatomic particles: “The more precisely the position is determined, the less precisely the momentum is known and vice versa.” Like the Coens, many non-scientific literary writers have extrapolated this into a life lesson that goes: “The longer you examine something, smarty pants, the less you understand it.” 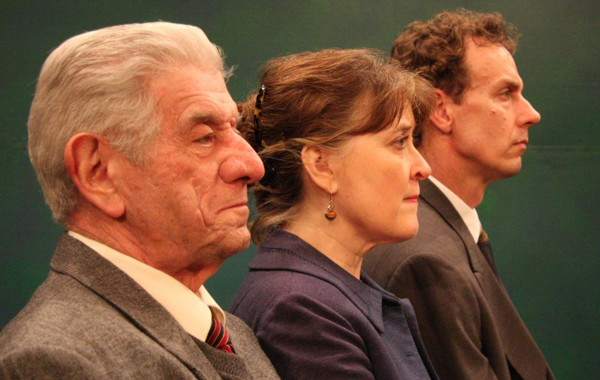 That’s the theatrical M.O. of Michael Frayn’s Copenhagen, a 1998 drama that is receiving a fascinating and frustrating production at Stage West. The British playwright attempts to recreate a mysterious 1941 conversation between German physicist Werner Heisenberg and his former Danish mentor Niels Bohr in Nazi-occupied Denmark. Heisenberg, who later insisted he was never a Hitler supporter, worked on a team that sought to develop plutonium for the Third Reich. The half-Jewish Bohr contributed his own expertise to the creation of the atomic bomb at Los Alamos, which of course summoned hell on earth in Hiroshima and Nagasaki in 1945. Frayn’s script elaborates on a central question: Did one brief chat between Heisenberg and Bohr eventually prevent the Nazis from creating their own bomb, or did it speed that process perilously forward? In lots of gleaming verbal jousts, the strange properties of the atom are compared with the perhaps stranger human tendencies toward self-aggrandizement and self-deception.

Director Dana Schultes choreographs Copenhagen as a kind of ultimate cage match between ex-associates Heisenberg (Chamblee Ferguson) and Bohr (Jerry Russell) with Bohr’s wife Margrethe (a sardonic Amber Devlin) playing referee, accuser, defender, pundit, and warm-blooded stand-in for the audience. The floor of set designer Jim Covault’s spare, starkly lit stage even features a big white circle as intellectual wrestling ring: Here the scientists, whose memories of events differ according to their agendas, tease and hammer each other over the roles that conscience and duty play in the pursuit of science under an insane fascist regime. Schultes helps Ferguson and Russell find all the right beats to create suspense in long metaphorical exchanges about the theories of relativity and the process of fission. Stage West has impressively mastered this difficult material –– you just wish the proceedings were a little less brainy and a little more gut-level.

Another problem is that Frayn doesn’t bother to deepen the personalities of Heisenberg and Bohr beyond their contrasting approaches to quantum physics –– science for its own sake vs. science in the service of humanity. Sometimes the characters feel trapped in the stock types of young turk and old master without enough sympathetic details to distinguish them as individuals. The playwright’s attempt to work in the accidental drowning of Bohr’s son as a parallel to his professional “son” Heisenberg’s being overwhelmed by political circumstances feels awkward. As a result, Copenhagen never quite convinces us that we are watching two of the greatest physicists of the 20th century debating the moral compromises that wartime thrusts upon people.

In many ways, Russell as Bohr and Ferguson as Heisenberg are perfect for their parts –– Russell’s wizened face suggests a certain Jewish sage quality, while Ferguson’s mischievous eyebrows and schoolboy demeanor work well for the zealous young atom-splitter whose mathematical obsessions bring him close to madness and self-destruction. Both actors certainly have the technical chops to keep an audience engrossed in stories of nuclear reactors hidden in caves and last-minute escapes from SS officers. But the disconnect can be summed up in a conversation I overheard in the restroom at intermission: “Can you believe that Jerry and Chamblee memorized all those lines?”

Their performances, much like the script itself, feel like admirable feats, daredevil theatrical displays, rather than the layered creation of brilliant but fallible men negotiating the dire straits of World War II and potentially the fate of humanity. From an analytical angle, Stage West’s Copenhagen offers much to appreciate. But your emotional, drama-craving right brain may feel neglected by the time the actors take their bows.