You’re probably going to see Date Night because of Steve Carell and Tina Fey. And why not? They seem like a terrific match because they’re so similar. They’re both intelligent, straightforward types whose comic stylings seem rooted in a simple desire to entertain rather than a need to work out personal demons or outsized neuroses.

Both were writers who didn’t find fame as performers until their 30s, and their offscreen lives are apparently stable and relatively free of drama. That grounded quality, and the fact that they’re not otherworldly beautiful, probably explains why fans relate to them in ways that they don’t relate to, say, Robert Pattinson and Megan Fox. Carell and Fey seem like funnier, cleverer, more attractive versions of the people who live down the block, and indeed this movie casts them that way. It sounds like a winner. 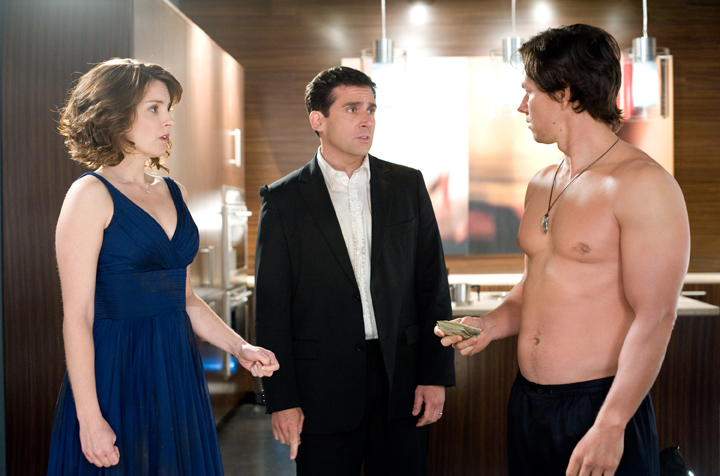 Yet much like the film around them, they deliver only in fits and starts. Part of that may be the lame script by Josh Klausner, which is only partially redeemed by the stars’ extensive ad-libbing. For all that, they don’t click like you’d expect them to. In the end, the problem might be that they’re too similar. The poised and sardonic Fey tends to be best when she’s playing off of a manic, wildly eccentric actor opposite her, like Amy Poehler in Baby Mama or everybody on her TV show 30 Rock. There’s no evidence that Carell can do this, and in any event, that’s not what he’s called on to do here. You believe Carell and Fey as a married couple: An early scene has the two of them spotting another couple across a restaurant dining room and imagining how their conversation is playing out, and you see two spouses who can still make each other laugh. They make us laugh, too, in that scene. Just not enough in the rest of the movie.

They portray Phil and Claire Foster, a tax lawyer and real estate agent in suburban New Jersey who have a weekly “date night” when they leave the kids with a sitter and dine out at a local steakhouse. Eventually they realize that their escape from routine has become a routine in itself, so Phil impulsively proposes that they go instead to a hip new Manhattan seafood place. Faced with the prospect of a long wait for a table, the Fosters finally swipe the reservation of a no-show couple named Tripplehorn. The meal goes great until two crooked cops (Jimmi Simpson and rap star Common) mistake the Fosters for the Tripplehorns and take them out behind the restaurant to shoot them. The Fosters manage to escape and spend the rest of a wild night trying to figure out why gun-toting mobsters are hunting them down.

There are enough stray wisecracks from the stars to keep your attention, but the only time the movie sustains the laughs is during a predictable but effective slapstick bit when the Fosters pose as strippers at a club and do an awkward pole dance. Elsewhere the momentum sputters, and at one point the movie stops dead entirely when the Fosters meet the actual Tripplehorns (James Franco and Mila Kunis) and get caught up in their marital problems. The supporting cast boasts some serious star power: Taraji P. Henson as a police detective, Mark Ruffalo and Kristen Wiig as a divorcing couple, Leighton Meester as the Fosters’ babysitter, William Fichtner as an Eliot Spitzer-like district attorney, and an uncredited Ray Liotta as — what else? — a mafia boss. Sadly, none of them are given enough to do, although Mark Wahlberg (as one of Claire’s former clients with a helpful espionage background) manages to parody himself pretty well just by spending the entire film shirtless.

Director Shawn Levy (best known for the Night at the Museum films) never properly establishes the tone of this piece and manages to turn shrill during a potentially inventive car chase involving a sports car locked grille-to-grille with a taxi. The best thing he does here is stop the action for an extended piece of dialogue in the middle when the Fosters pull over into a side street and discuss all the marital issues that have been nagging at them. The scene is remarkable for its seriousness, and it’s nicely played by the two actors. It still feels like it belongs in a different movie, and it reminds us that Mr. & Mrs. Smith put the genres of action-thriller and marriage comedy together much more skillfully.

Date Night is an early arrival in a wave of action-comedies that Hollywood will be putting out in the coming months, and the easy charm of Carell and Fey makes this film much easier to sit through than the similarly themed but awful The Bounty Hunter. Yet with the comedy talent on display here, the movie should have been more fun. If you like your action laced with comedy, there’s better stuff coming down the pike. Just watch this space next week.