Well, it’s the third week of April. As everyone who’s ever been a teenager knows, the 20th of April is written numerically as “4/20” and, as a result, is the unofficial official marijuana holiday, with the time 4:20 (a.m. and/or p.m.) being the unofficial official perfect time of any day to smoke out. April 20, basically, is when lots of white people unabashedly dig out their Peter Tosh albums and Peter Tosh angrily whirls in his grave. 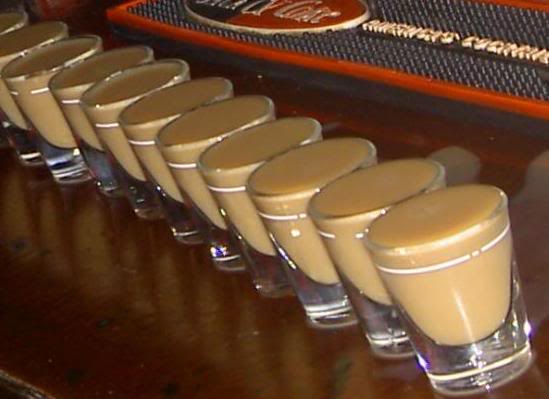 Moreover, it’s also a day for legalization activists to wave signs emblazoned with pro-pot slogans and awful puns. As a supporter of legalization, I’d feel remiss if I wrote a review of some faceless sports bar rather than extolling the virtues of Mary Jane. Moreover … uh, what was I talking about?

Well, actually, I don’t hate making shots. I’d just prefer not to. As a professional bartender, I know only four or five recipes, and I probably don’t even make them right. As far as I’m concerned, Royal Fucks, Red Snappers, and Redheaded Sluts are all the same, and you probably don’t know the difference anyway, unless you order a Lindsay Lohan, in which case I do know to make a Redheaded Slut –– it’s just one spiked with a bunch of Coke (as in Coca-Cola, not the white powder). I have only so much room in my brain, and if learning how to make an Oatmeal Cookie or Smurf Vagina or whatever else means deleting a bunch of Star Wars trivia from my hippocampus, well, the Force is with me. Always. This is also why I don’t follow sports.

On the other hand, if you don’t try to learn new things, something bad happens to your brain as you age, like memory loss or something — I heard about it on the radio, but I don’t really remember the story. Nobody wants to be the subject of a “missing elderly” message flashing from the side of the freeway, least of all me, so I’ve been trying to tone my mental muscles. The easiest workout, I’ve found, is cramming my head full of data that I may find useful and revisit on a regular basis. If you are a paleontologist, you’ll want to continue to learn about dinosaurs. I make drinks, though, so I’ve been studying up on booze.

Did you know, for example, that the hops used in beer are in the same family as marijuana? It’s true, because I looked it up on Wikipedia. Both are part of the cannabaceae family, and beer hops (Humulus lupulus) even have resin, the sticky crap on the good weed that your friend just bought (not the black sludge coating your friend’s bong, which is actually tar). According to the article, the acids in the hop resin contribute to the flavor of the beer. Hop resin doesn’t have the same effect as weed resin, but if you’ve ever drunk a craft beer and wondered why it tastes like the smell of your burnout uncle’s van, it’s probably because the brew is extra hoppy and, deductively, extra resin-y. Either that or you’re drinking in your burnout uncle’s van.

So I learned about hops, but I also learned how to make a few more shots, as much for my own professional development as for my brain’s. But please don’t ask for them. I can certainly use the practice, but, see, there are probably 10 people around you who just want beers. In the time it takes for me to assemble half a dozen Mind Erasers, Alien Secretions, or Turd Twizzlers, I could have opened a whole lot more Bud Lights. And then, after you’ve gulped a single swallow of schnapps with fruit juice and Red Bull, you’re going to immediately want some regular drinks, and that’s not fair to everyone else who’s been waiting. Speaking of fairness and waiting, legalizing weed will be on the California ballot in November. If it passes and bandages the Golden State’s financial wounds, the prohibition on marijuana will be one step closer to ending. I can imagine a future in which 4/20 becomes more than a dopey excuse to burn one. I’m just not going to hold my breath. Figuratively speaking, of course. –– Steve Steward