The word “cartoonish” is typically used as an insult, but it describes all the best qualities of Theatre Arlington’s tearfully funny staging of The 25th Annual Putnam County Spelling Bee — brightly colored, sharply drawn, and buzzing with the kind of manic inventive energy that normally only a Pixar movie can generate. 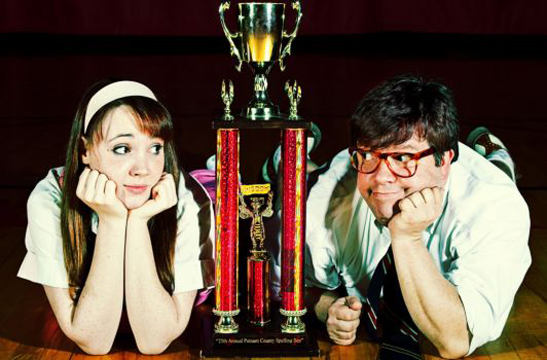 The conceit of this interactive musical by William Finn (music and lyrics) and Rachel Sheinkin (book) is that adult actors play spelling-champion children who compete with selected audience members to win a low-stakes, high-drama bee. Sounds like a recipe for terminal cuteness and incorrigible mugging, but Finn and Sheinkin are hip to the frantic lifestyle that is 21st-century childhood –– including food allergies, overbooked tots, and helicopter parents –– and director Michael Serrecchia treats it all with enough gravity to allow his actors to generate big laughs from tiny things. Never before has misspelling the word “vug” amounted to a soul-scarring existential defeat.

Putnam County Spelling Bee displays a masterfully light touch with a variety of moods –– sweet and edgy, smart-ass and nostalgic –– and the raucously charming cast seizes every opportunity to score canny comic points while reminding the audience how incredibly stressful and demoralizing being a kid can be. Serrecchia gives each character’s “Look at me, ma!” moment a surreal edge. Chip, the Boy Scout trying to protect his bee title, tosses candy around the theater from a concession box as he sings “Chip’s Lament (My Unfortunate Erection)” about the hormonal eruption that threatens his incumbency. Olive indulges in a touching fantasy of unconditional parental support with “I Love You,” in which she’s serenaded by her mother –– who’s actually ditched her for a spiritual sojourn at an ashram –– in front of a huge portrait of an Indian palace. In “I Speak Six Languages,” Marcy details her crushing academic and extracurricular load and prays for guidance. Jesus manages to make a personal appearance, only to inform her that spelling bees aren’t at the top of his priority list. All the action is underscored with tacky vigor by choreographer Megan Kelly Bates’ witty dance moves, incorporating girl-group shimmies, Broadway hoofing, and hip-hop gestures.

If any one of the marvelous performers is primarily responsible for keeping Spelling Bee tight and acerbic, it’s Hart as weary, bitter Vice-Principal Panch. He’s responsible for giving the bee competitors their words and any background information that will help them. As played by Hart, Panch has been on administrative autopilot for years and is eager to extinguish any signs of enthusiasm that his young charges might dare to show. He challenges one participant with the esoteric term “phylactery.” Definition, please? It’s a small leather box worn on the arm or head during certain Jewish temple observances. Um, could he use it in a sentence? Hart pauses with barely restrained impatience and finally drones, “Put down that phylactery, son. We’re Baptists.” Burnt-out authority figures are just one of the childhood perils that Theatre Arlington’s riotous production nails handily.

Though Dallas Black Dance Theatre has been around for 34 years, the company started performing in Fort Worth only about five years ago. Last week’s performances in W.E. Scott Theatre in the Fort Worth Community Arts Center showed why the company has survived so long: dazzling showmanship, innovative choreography, and passionate dancing. The Fort Worth Symphony Orchestra, on the other hand, has been with us since 1925 and could have used some of DBDT’s esprit on Sunday at Bass Performance Hall. “Bland” was the word that came to mind during most of FWSO’s performance of Beethoven’s Ninth Symphony.

DBDT combined Modern, jazz, Broadway, and classical elements in a choreographic stew spiced with idiomatic African-American moves, from the wonderful proud strut of the five men to the sassy, skirt-slapping walk of the seven women, all dancing barefoot. Nycole Ray offered a change of pace with a wistful solo danced mostly seated in a folding chair, looking like a mother taking five and reminiscing about life, set to the piano music of John Cage. Chung-Lin and Enrica Tseng, retired husband and wife dancers from Texas Ballet Theater, continued the low-key section with a moving account of the White Swan pas de deux from Swan Lake. (The two offer a classical dance class for the company.)

But it was the ensemble that made the program a walloping success. Bathed in sympathetic lighting, they gave everything they had, dancing their hearts out in fresh, imaginative choreography. If you could harness that energy, you could power half the city.

By my count, this is conductor Miguel Harth-Bedoya’s third go-’round with the Beethoven Ninth over the last 10 years, and no new insights or revelations were apparent. In fact, Sunday’s performance was surprisingly short on detail. Musical phrases often ended without shape or color. Much of the first movement’s drama was untapped, and the slow movement seemed unending. The music sounded under-rehearsed, or the musicians were tired. The bright spot was the combined choruses of Texas Christian University, Southwestern Baptist Theological Seminary, and University Christian Church, 200 strong, who sang as one, with crisp attacks and releases and wonderfully modulated sound, during the symphony’s rousing finale. Things came alive here, although soprano soloist Melody Moore lacked the vocal heft to successfully cut through the chorus and orchestra, and I couldn’t hear mezzo-soprano Virginia Dupuy. Tenor San-Ky Kim and bass Richard Zuch fared better, although Zuch tends to disappear at the bottom of his range.

The sold-out house cheered lustily at the end. And indeed, the last movement deserved an ovation. But that’s only a quarter of the Symphony. Next time maybe we’ll get the whole work.
–– Leonard Eureka