I don’t know what you were doing the other morning, but I was drinking beer and watching The Price is Right.

At least I was at a bar. Some people drink beer and watch The Price is Right at home. 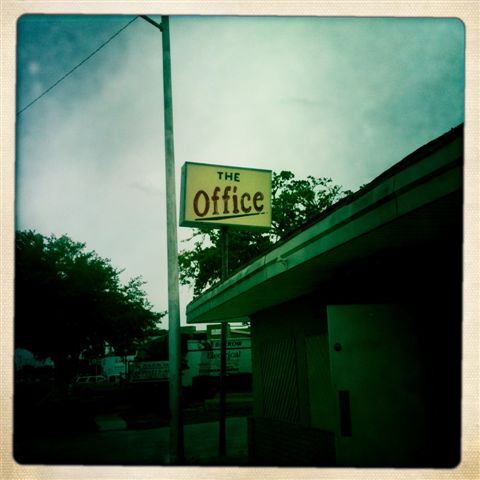 I’d gone to this bar on Belknap called The Office specifically because I’d heard it opens at 7 a.m. Of course, I’d had a late night, and there was no way I was making it that early, but I made a good effort, getting there around 10. I found a barstool and ordered a draft just as Drew Carey invited a CSU Northridge lass to come on down!

The thing about The Office is that there are a lot of TVs but not in a sports-bar sort of way. It’s more like a quirky pawnshop, if said pawnshop were housed in a wood-paneled breadbox –– The Office might better be named The Cubicle. I’d say the nearest comparison would be The Poop Deck, but The Office also had a lot of old photos of regulars tacked up all over the place.

I asked the bartender how long the bar had been around, and she said, “Longer than you.” I’m 31, and that got me thinking. If you’d been a regular at a bar that opens when sensible people are tying their ties, sipping coffee, or reading the sports page, I’ll bet that a lot of your memories are framed within that context. I’m not talking about that one time your buddy did that one thing. I mean memories like: where you were when the Challenger exploded.

Normally, if you’re in a bar when a significant world event occurs, it’s night. But if you’ve been a longtime regular at a place like The Office, I imagine it’s been the spot for a lot of pivotal daytime moments. I mean, I’m sure plenty of people went for a bottle following 9/11, but they were probably at home.

So what, right? Who cares that some people get drunk following national daytime tragedies at an early morning bar as opposed to in their own living rooms? Well, I think it’s interesting, because bars are some people’s home away from home. In fact, the community of regulars at any given bar are familial units in their own right, and like the family back at the house, bar regulars share the highs and lows of living in a very similar way. If you’ve had the pleasure of reading Weekly scribe Ken Shimamoto’s book about The Wreck Room, you might remember a story that legendary bartender Carl Pack tells about the afternoon when the tornado waltzed into town. For him, it happened at the Wreck around happy hour while he was sitting around with his friends.

So there I was at one end of bar the other morning while regulars filed in. I wondered what they’d seen from the context of their barstools over the past several decades. What were they thinking on the morning when John David Hinckley opened fire on Ronald Reagan? Were they there when Nixon resigned? Did the bar stay open after 9/11 to offer comfort and commiseration, or did everyone go home?

I’m glad the only thing bad that happened when I was watching the tube at The Office was some dumb answers on Celebrity Jeopardy, but if something terrible had transpired that morning, I know I would have been around good people. –– Steve Steward