We stood hidden from sight in the tall grass on the outskirts of the ruin as John, our guide, stepped out to meet the group of locals whose track we had crossed. The site was supposed to be abandoned, but there they were, stripping parts off of a derelict truck in the hot sun. We were surprised to find them there, and they were surprised to see a visitor suddenly appear from the overgrowth. It seemed best to let John (not his real name) speak for us. 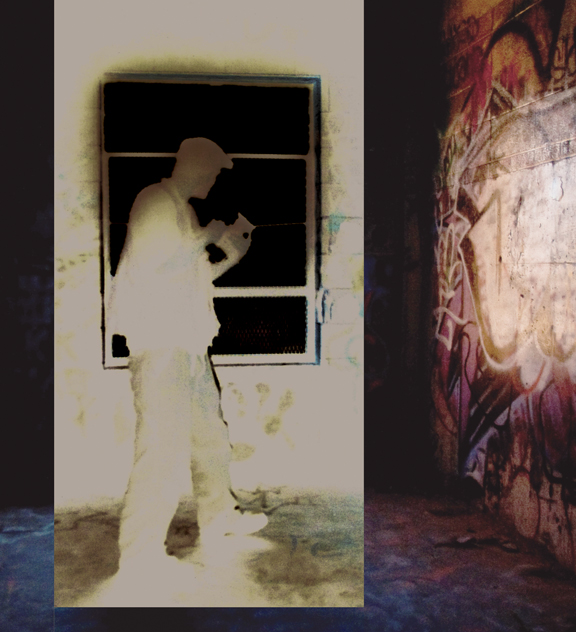 We couldn’t hear what was said, but we watched as John engaged in an animated conversation with the men, then shook hands with them and handed over some money. The men got into a beat-up Ford and drove off, pretending not to know we were there. For the price of 15 dollars American, we had been left alone to explore and photograph the site, one that few people would get to see.

Light streamed in from bullet holes in the walls, barred windows, and unintentional skylights in the roof. Abandoned industrial furnaces, nearly a hundred years old, were covered in graffiti and flanked, incongruously, by “harvest gold” and avocado kitchen appliances. We took turns photographing, careful to stay out of one another’s shots. Just being here was illegal, and nobody wanted documentation of their visit floating around the internet.

As exotic as the locale seemed to us, we weren’t exploring in some third-world country but in an undisclosed location in North Texas. With no great geographic frontiers left in the United States — and fewer and fewer in most developed countries — a growing international collection of photographers and thrill-seekers have turned to what is being called “urban exploration.” They search out the forgotten, the abandoned, and the forbidden: Derelict buildings, storm drains, and construction sites are all considered fair game to the urban explorer. What was once just a pastime for bored teenagers has emerged as an underground subculture and art movement.

“I draw a great deal of artistic inspiration from the remains of human endeavor,” John explained. “Kinda Tom Waitsian, in a way.”

The movement, clearly, is controversial. Explorers put themselves in some danger, both from the sites they visit and other people they may encounter. 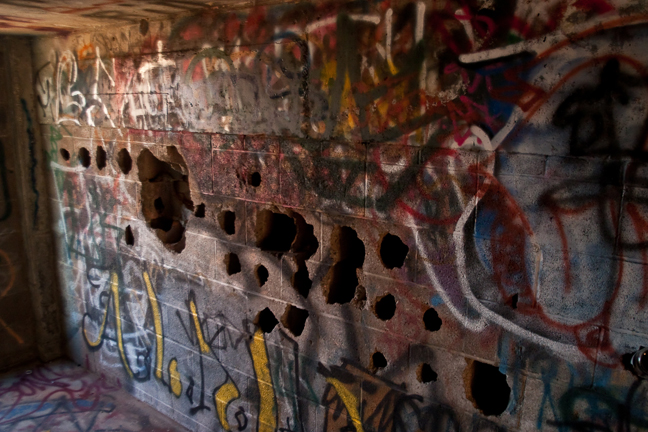 “If someone gets injured on the property, they could turn around and sue the property owner for having an unsafe environment, even though they did trespass onto the property,” said Randall Hearne, a former police officer who now owns Fall Creek Security in Granbury. “Primarily it’s just liability issues. A lot of the urban explorers are pretty responsible — they just want to look around and take some pictures. But then you have the [people] who are going to go out and spray paint or worse.”

Though not always the focus of the expeditions, photography resulting from urban exploration has become a serious art form, the subject of internet sites, books, gallery shows, and videos. Photographer Katherine Westerhout, whose work has been featured in museums and books and  on PBS, drew outraged howls from the urban explorer community when she published a number of photographs that many in the subculture claimed were derivative of their work. Westerhout admitted  getting location ideas from the web but added insult to injury by referring to the explorers’ photos as uninteresting “snapshots.”

While well-connected artists like Westerhout can usually get permission to shoot in an abandoned site, the explorers often risk arrest in getting their photos. A trespassing charge is considered the price of art, but some have also been charged with burglary, even though theft is strictly against their ethos.

“I’m more frightened of getting caught by security [guards]” than by police, John said. Guards “tend to lack a sense of humor. The police are usually fairly calm. The worst a cop has ever told me was, ‘Get out of here.’ ” 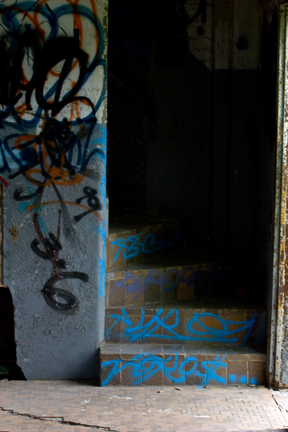 Hearne said that unless the property owners specify otherwise, guards prefer just to eject explorers from the property: “Our rule, if it’s just a simple trespass issue, is we ask them to leave the property before we would escalate into any kind of police involvement,” he said.

Fear of fines or arrest isn’t much of a deterrent. An East Coast group infiltrated a vacant wing of an active prison. They posted photos of themselves eating in the prison cafeteria, looking at the video monitors, and even exploring the cells. While some explorers dress in dark clothing and try to avoid detection, others simply try to look as if they belong.

“Wear an orange reflective vest and a hard hat and carry a clipboard,” an anonymous explorer said, “and no one will think twice.”

As underground societies go, urban explorers are fairly loose-knit.  But they do depend on one another for tips on new locations and entry methods. An extensive and closely guarded database is maintained on a web server, and access to the information on that server has to be earned. “Take only photos, leave only footprints” is their creed, much as it is for those who hike and climb in natural rather than manmade wilderness. People who loot or damage abandonments in any way are quickly ostracized from the community.

“We’ve literally had locations get vandalized or burned down within a week of putting the location on the web,” one explorer told me, “so now we are very careful about who we let in.”

Part of that screening process is getting to know some members in person, so I met with a handful of local explorers at an Arlington hamburger joint. It was a revealing experience, and not just for me — most of the people at the table had never met in person. Since explorers don’t post photos of themselves, there was a bit of nervousness involved in trying to determine which table was our group. To my surprise the party included folks of all ages, from teenagers to middle-aged couples with children.

As we waited for our food, the explorers exchanged stories and passed around photos of sites they had explored. Some of the photos showed a long-abandoned nursing home, complete with medical supplies (and blood samples) still in the pharmacy and personal items in the rooms. It was the kind of site that explorers dream of — one where it seemed as though the residents and staff just walked off one day and never came back.

After the meal, we went exploring. In multiple cars, we circled a building that once housed a helium plant, then government offices, before it was abandoned. Finding a place to park nearby where we wouldn’t be noticed proved to be a challenge. Finding a way into the facility was even tougher, but long-abandoned buildings are rarely very secure. Artistic merit aside, there is a childlike thrill in being somewhere you know you’re not supposed to be and in seeing what’s inside a building that you know passersby must wonder about every day. 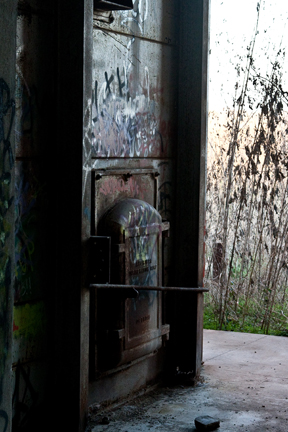 Not surprisingly, due to its landmass and population, Texas has the most entries in the database. But this is not a strictly American phenomenon. On the web site are tales from explorers in many countries. Members in Rwanda posted photos of bullet holes, shell casings, and artillery damage in what was once a high-end hotel. There are photos and maps from the catacombs under Odessa, Ukraine.

The Odessa photos include another, more gruesome aspect of  urban explor-ation: photos of the body of a teenage girl who became lost while exploring and never found her way out. For two years after her death, her body lay in the catacombs until the news media (contacted by an explorer) pressured the government to go in and bring her back out.

Discovering bodies is not an uncommon event for explorers. Abandoned properties are often inhabited by the homeless. When they die of exposure, suicide, overdose, or just old age, it is often explorers who find them and alert authorities.

Encountering other people engaged in more serious illegal acts is a constant problem. While homeless people are easily bribed with cigarettes and pocket change to ignore the explorers or even to act as guides, other denizens of abandoned sites are none too happy to be found there. Scrappers — people who break into buildings to steal copper — are the explorers’ nemesis.  They tear up what the explorers seek to preserve. Abandoned buildings are also prime locations for illegal drug labs and gang activities.

Not surprisingly, abandoned sites can also be structurally unsafe. After years or decades of neglect, floors and stairways aren’t to be trusted, and even experienced explorers get injured in collapses or other mishaps. Many of them travel with a long list of equipment: ropes and other climbing gear, first aid kit, multiple flashlights, food, water, cell phone, cameras, tripods, cigarettes (for bribes), and a gas mask capable of filtering out asbestos and other breathing hazards. Exploring alone is never recommended. 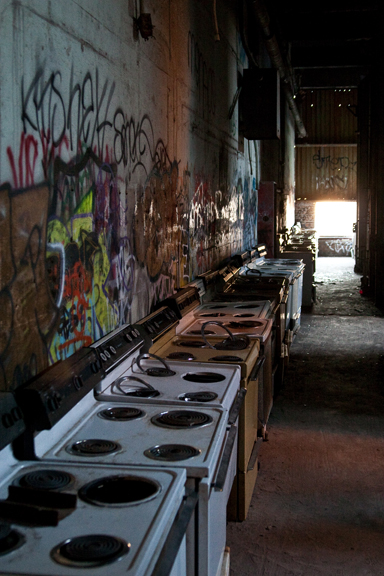 There’s also a list of things not to bring — in particular, anything that could be considered a burglary tool. Getting caught with a pry bar or a bolt cutter can turn a trespassing warning into an arrest, and the explorers’ rule is never to break into a property. If the only way into an abandoned building is to cut a chain or break a window, they will keep looking. Climbing up a drainpipe to the third floor where there is an open window is acceptable; cutting a padlock is not.

Once inside, they try to leave the site as undisturbed as possible. Most explorers will admit to taking things like a business card or an old timecard, but anything more is forbidden.

“If I take a sheet of company letterhead out of a pile of them on the floor, that’s one thing” said Sam (also not his real name), a North Texas explorer. “But you can’t take a desk or a typewriter.  If it’s something that was to be used and thrown away, it’s OK.”

John agreed. “ I admit that I am guilty of some very minor memento-grabbing — mainly some water usage charts from 1957 — but they would have just rotted away, and there were reams of them. It’s not like anyone will miss 10 or 15 out of tens of thousands.  Also, they are a piece of history left to rot — why not save a few?”

Some of the artwork produced by urban explorers is astounding, and some of the history they record is valuable. But there is no practical way their method of working could ever become legal. For every ethical explorer, there is a scrapper or a kid with a can of spray paint.

“Personally, I think that it is ridiculous to make it criminal to explore, if people aren’t going use the property,” John said. “Just make it the law that if you hurt yourself, that’s your fault, not the property owner’s. I know that is utopian, and there are lots of people who go simply to speed the decay, but in an ideal world … .”

Local writer and photographer Steve Watkins can be reached at Steve@storyandphotosby.com.