The following statement is true –– and also pretty much meaningless: Toy Story 3 is the weakest Pixar movie in the last 10 years. It’s true, because the movie never achieves the emotional weight of so many of its fellow Pixar films, despite its efforts, but also meaningless, because the studio has set a borderline-absurdly high standard for itself and because Toy Story 3 only looks weak next to its predecessors (whereas next to Shrek Forever After, this movie looks like a stone-cold masterpiece). 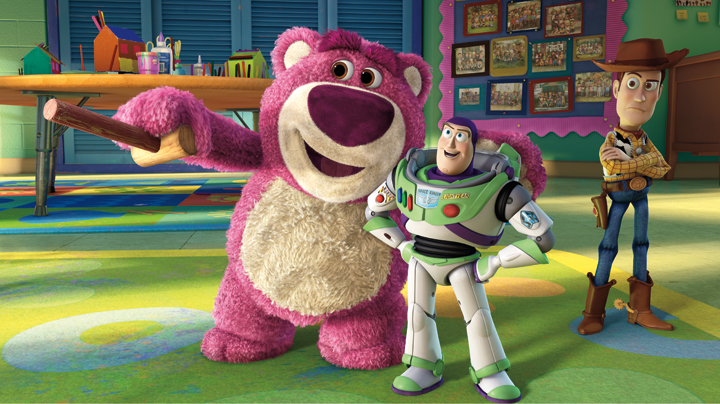 Maybe all this is so much extraneous baggage, but we need to discuss the baggage when we ask where is left for this story to go. The original Toy Story (1995) ushered in the entire era of animated films in which we live, and its technical approach has been so widely copied that it’s become hard to see how dazzlingly original and unique it was back then. The conceptual genius of 1999’s Toy Story 2 was that it took the idea behind The Velveteen Rabbit to its logical end: A child’s love can bring a toy to life, but children grow up and leave their toys behind, which is a form of death for a toy. With Woody, Buzz Lightyear, and company facing their own mortality, Toy Story 2 was the first Pixar movie to achieve that piercing quality that so many of their other films have since equaled.

Perhaps inevitably, there’s no such power in Toy Story 3, but that doesn’t mean there’s nothing here. The boy who owns all the toys, Andy (voiced by John Morris) is now ready to leave home for college and hasn’t played with his toys in years. Andy decides to take Woody (voiced by Tom Hanks) to college and leave the rest of the toys in the attic, but a series of misunderstandings means all of them are shipped off to a local day care center. They’re welcomed there by the adorable, grandfatherly, strawberry-scented Lots-O’-Huggin’ Bear (voiced by Ned Beatty in soothing, Southern-accented tones), who depicts the place as a paradise for toys, one where they’re never neglected or left behind because new kids arrive all the time. However, Woody doesn’t trust the teddy, and indeed it turns out that Lotso runs the other toys like a brutal warden. He reprograms Buzz (voiced by Tim Allen) and turns him into his personal thug while banishing Woody’s friends to the Caterpillar Room, where they’re abused by hyperactive toddlers. It’s up to Woody to bust them out, which quickly turns this film into a prison-break movie.

The stickler in me has to point out a few things: The embittered Lotso is too similar to the bad guy in Toy Story 2, the climax never convinced me that the toys would end up in an incinerator, and the ending (in which Andy is given a second chance to dispose of his toys) is more drawn out than it has to be. I’m supposed to notice all that formal stuff, and I do, but I can’t remember the last time I cared less about it. Toy Story 3 evokes the enormous charm that made the original a hit in the first place, partly because it does not coast on our residual affection for these characters, unlike some other movie series that I could name. The filmmakers keep a firm grip on the tone of the piece, cutting the action-movie stylings with the right amount of cutesy humor. The opening flashback sequence is just dazzling, as a young Andy casts Woody, Buzz, and company in a sci-fi Western adventure that gives us explosions and death rays as vivid as the ones in Andy’s mind, coupled with the elasticity of a child’s imagination. (“Well, I have a dinosaur that eats force fields!”)

This goes along with other pieces of excellence that we’ve come to expect from Pixar. The action sequences are tidier and more inventive than the ones in most Hollywood thrillers — check the montage of failed escape attempts from the day care center or Woody and Buzz trying to take down a surveillance camera-monitoring monkey with cymbals. These are balanced by funny situations like when Woody finds himself in another kid’s home with toys who approach their roles in life like a troupe of eager improv actors (voiced by Timothy Dalton, Jeff Garlin, Bonnie Hunt, and Kristen Schaal). The corners of the frame are stuffed with gags and references that you’ll need multiple viewings to catch, and anime fans will have their hearts warmed by the sight of Totoro among the friendly new toys. There’s a delirious subplot when Barbie (voiced by Jodi Benson) finally meets her Ken (voiced by Michael Keaton). All this wealth of material earns Pixar the right to go sequelling for the first time in 11 years.