If there’s any doubt that Nicole Holofcener should have filmed the Sex and the City movie, her latest comedy Please Give should remove it. The independent filmmaker directed episodes of the TV show in the 1990s, presumably to raise her profile and pay her bills. On the evidence of her four intelligent, plush comedy features, she could have at least prevented Carrie Bradshaw and company from becoming the grotesque self-parodies that they currently are. 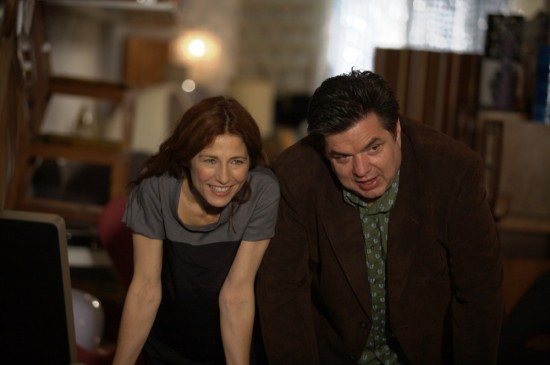 A mainstay of Holofcener’s films, Catherine Keener portrays Kate, who owns and operates a vintage furniture store in Greenwich Village with her husband Alex (Oliver Platt). Her work affords a comfortable living but makes her feel like a vulture, because she regularly buys merchandise from the estates of recently deceased old people, whose heirs often have no idea how much the sofas and chairs are worth on the open market. Looking for volunteer work doesn’t assuage her guilt. Nor does giving $20 bills to homeless people on the street, which pisses off her 15-year-old daughter Abby (Sarah Steele), who doesn’t have an allowance.

Holofcener’s last two films (Lovely & Amazing, Friends With Money) were set in L.A., but this one finds her back in her native New York. She takes advantage of the city’s close quarters to create all sorts of funny encounters with customers and passing strangers, like Kate’s mortifying attempt to give her restaurant leftovers to a shabbily dressed middle-aged African-American man outside a fancy eatery. Among the many loose-hanging plot threads are Alex and Kate’s dealings with their next- door neighbors, an elderly woman named Andra (Ann Guilbert) and her granddaughter Rebecca (Rebecca Hall), a radiology tech who doesn’t live with her grandma but has to stop by constantly to care for her. Alex and Kate are secretly waiting for Andra to die so they can buy her apartment and make it part of theirs — is it me, or are all of Holofcener’s films about real estate? This leads to a superbly awkward dinner scene when Rebecca’s tanning-addict sister Mary (Amanda Peet) calls out Alex and Kate and bluntly asks them what they intend to do with Andra’s rooms after her death. “You’ll have to remove the kitchen tiles,” the old lady chimes in. “They’re all moldy.”

As with all Holofcener films, the dialogue is sharp, the female characters are drawn with unflinching detail, and they’re allowed to have moments like Abby’s unexpected bonding with both Rebecca and Mary that you too seldom see in Hollywood movies. This makes it easy to overlook minor flaws like the subplot with Rebecca suddenly finding love with a much shorter man (Thomas Ian Nicholas). Holofcener does settled couples much better than she does first love.

The movie ends with Kate finally finding a measure of contentment in buying Abby a $235 pair of jeans. Please Give may, in the end, be only a philosophically fruitless exercise in rich white guilt. Still, if the alternative is the vulgar, unthinking materialism of Sex and the City 2, I’ll take Holofcener’s highly diverting movie six days a week and twice on Sundays.