Although Fort Worth water officials are considering putting a new sewage treatment plant near homes on the West Side of Fort Worth, residents aren’t making any demands about buffering, environmental protections, or odor control –– they’re determined to keep the facility out of their neighborhood altogether.

If, however, the city insists on putting a plant next to them, expect a howl of demands to follow. 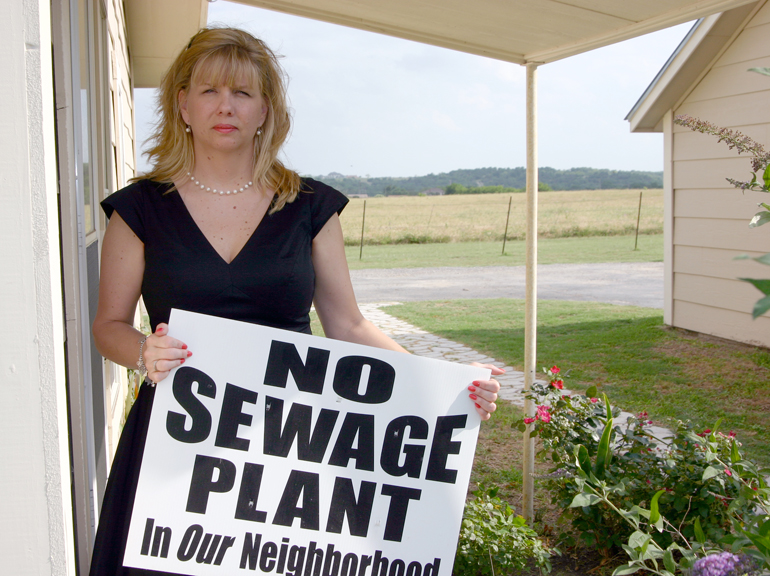 “If it has to be on the Mary’s Creek basin, we will demand certain things to protect the creek,” said Amy Reed, a leader in the fight to oppose the plant.

Wildlife and ecosystem protection, flooding and odor control, and fencing and landscaping to mask the facility are among the possible demands, but forcing the city to find a less populated area for the facility is the aim at this stage.

“It has no business being inside a community,” said Reed, whose family has lived for six generations near one of the proposed sites. “We were here first. It’s not a cohesive fit.”

The need for a new wastewater treatment plant has city officials scouring the West Side for a location, but finding 100 acres of vacant land to accommodate the facility in a spot that won’t infringe on nearby residents isn’t easy in a city with a population topping 700,000.

City officials have assured residents that “livability” and quality-of-life issues are a top priority when selecting the site. Those claims ring hollow to residents questioning the openness of the process and the sincerity of city officials.

A recent question-and-answer session between concerned citizens and water officials cleared up a few uncertainties but did little to quell the fear and anger. A technical team has eyed more than a dozen possible locations but is looking most closely at three areas, all of them near Mary’s Creek in North Benbrook and West Fort Worth. Residents there aren’t impressed by the more politically correct title of “water recycling center” being bandied about.

Water officials said no site has been selected yet.

“We keep hearing, ‘Don’t worry about it, don’t panic yet,’ but when do we panic?” said Don Sabo, who has lived in his Benbrook house near one of the proposed sites since 1974. “If we wait to panic, will it be too late and a done deal?”

The neighbors worry about creek flooding and erosion from the plant’s water discharges. They worry about bad odors and falling property values.

City officials discount most of those concerns and appear intent on choosing one of the three locations by late 2010 or early next year. They understand that no one wants a sewage treatment plant next door to them, no matter how well done or how badly needed. The Mary’s Creek plant is expected to discharge millions of gallons of “gray water” into nearby waterways each day to be carried downstream.

The Mary’s Creek Water Recycling Center would be a state-of-the-art facility, and it would produce treated water suitable for uses such as irrigation and cooling. The city’s only other sewage treatment plant, Village Creek in Arlington, has served most of Fort Worth and surrounding cities for 50 years. That system is made up of more than 3,000 miles of pipeline, according to Frank Crumb, water director for the city of Fort Worth.

“As the system gets bigger and bigger, it becomes more difficult to transport water flow across town,” he said. “So we need a satellite plant to reduce the amount of pipelines needed.”

The people living near the proposed sites wonder why the plant isn’t being built farther west in rural areas such as the Walsh Ranch. That development and others in the area are expected to grow by leaps and bounds in the coming years, with thousands of homes and businesses relying on the new wastewater treatment facility. Some of the original proposed sites were on the ranch, but those were later nixed.

The more wide-open spaces of the ranch were ruled out because of topography problems, Crumb said. Wastewater treatment is more efficient when gravity can be relied on to move water.

“The farther downstream the site is located, the more area the plant can serve by gravity,” he said. “That’s why Village Creek is where it is.”

Sabo and others question whether this is another example of Fort Worth officials catering to developers with deeper pockets while ignoring the concerns of current residents.

“The three sites they picked are right here in this one area,” Sabo said. “We’ve had flooding problems here in North Benbrook. Anywhere they put this thing on Mary’s Creek will impact us.”

A satellite facility on the west side of town would serve the growing population there, ease the burden on the Village Creek plant, and take advantage of gravity flow. Building the plant farther west in the Walsh Ranch area would require pumping water farther uphill to be treated, which costs more, Crumb said.

Fort Worth’s 2003 comprehensive plan indicated a need for a new wastewater treatment center. Officials have already determined the West Side is the most efficient place to put the facility.

The city started looking for locations in June 2009 when a 17-person community advisory committee was formed to develop criteria for selecting sites. Land availability, topography, environmental impacts, and proximity to existing neighborhoods and discharge locations were among the criteria considered. After that, water department representatives and the engineering consulting team formed a technical committee to pick the potential sites.

While water officials have known about the possibility of a water treatment center being built near Mary’s Creek for a year now, the residents who already live near the creek didn’t hear about it until February.

“They did this as far under the radar as they could without the public knowing about it,” said Cindy Creswell, another resident living near a proposed site. “When Fort Worth decides to do something, they do it, and then the residents hear about it later.”

Crumb said the new facility would rely on new, cleaner, and more efficient technology that would produce a higher quality of treated water, giving the city more options for reuse rather than sending it all downstream in Mary’s Creek. Some of the water could be reintroduced to area lakes and eventually turned into drinking water.

The satellite plant will leave a “smaller footprint” than the Village Creek plant, which sits on a 200-acre site and can discharge up to 166 million gallons of water a day, compared to the 25 million a day capacity at the Mary’s Creek site.

The satellite plant needs only about 50 acres to operate, but the city wants to obtain twice that much land to allow room for growth and to provide a buffer between the plant and neighboring property owners. The new technology also improves odor control.

“You really won’t even know it’s there,” Crumb said.

“There is no amount of buffering they could do so that we could be protected,” Reed said. “There’s no amount of fencing, shrubs, or trees they could put there because it does not belong in a neighborhood.”