I hate to admit it, but you notice a lot more things when you’re sober. Now obviously, a lot of this has to do with the fact that alcohol is an intoxicant, and when you’re giving your gray matter a booze bath, your judgment gets a lot looser. Booze makes people who are normally uptight and organized start to play it by ear. When people who normally play it by ear get drunk, well, they’re who you’re honking at in the Whataburger drive-thru at 3 a.m. You know, for like, passing out and blocking the line. Not that I ever notice this. If I’m at Whataburger at 3 a.m., the only thing I notice is the Whata-cop and the shredded remains of the day’s Star-Telegram hanging above the napkins and straws.

Anyway, I bring this up because I’d met a friend at J.R. Bentley’s in Arlington the other night, and for the entire time I was there, I was sober. Granted, we were only there for like 30 minutes, but whatever. During that half-hour, I had enough wits about me to make some observations. 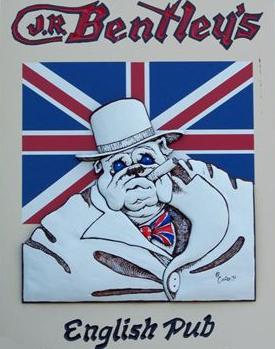 You might expect me to go on at length about the bar, but I’m not. I think it’s sufficient to say that J.R. Bentley’s is a nice place, patterned after an English pub. They serve food there, and the drinks are reasonably priced. I don’t really care for American ideas about English pubs, and if they are at all accurate, then I don’t see what the big deal about English pub-crawling is. But if one of my friends wanted me to meet them at Bentley’s again, I’d look forward to it. Go there. You’ll have a good time.

What I did notice about Bentley’s were the people, specifically two bald guys who were super drunk and super loud. Now, I have nothing against bald people; indeed, at the rate at which the hair on my head is decamping for my shoulders, hating on bald dudes would border on self-loathing. But let’s be honest — it’s hard to ignore a loud drunk, and when said loud drunk’s head is gleaming under the glare of can-lights and neon signs, it tends to catch one’s eye. When there is a pair of gleaming, bald, loud-drunk-guy heads, you practically have a license to stare.

These two dudes were probably in their late 30s or early 40s, and they were there with some other people I figured were their friends. I assumed that the bald guys, however, were brothers. Not only did they look related –– and I’m sorry, but when bald guys congregate, they all look a little related –– but their conversational dynamic was close enough to suggest that they were twins. Not that I could tell what they were talking about; despite their volume, the slur factor was so high that I couldn’t tell if they were yelling about Lamar Odom or Lamar Boulevard.

Another dude, this one a little older, approached their table. He had gray hair and glasses and one of those business-casual aloha shirts. To say that he was trashed would be demure; unless there’s a spot near the bar at J.R. Bentley’s that has an unusually strong gravitational pull, I’d say he was about to fall over. And the bald brothers were giving him a lot of shit. For a second, I had a vision of a really uncomfortable bar fight unfolding: The brothers flank this poor guy, Budweiser breath drifting toward him from either side, they stare menacingly, he tries to apologize, and then POW! — the gruesome twosome execute some kind of badass bald-brother combo move, the end of which probably culminating in congratulatory slaps on the sides of each other’s shining domes.

But nothing happened, and all that shit-talking merely turned into laughs and a slapped back. I guess that even when you’re sober, keen observation is at best a crapshoot. That’s why I went to Cave’s and got drunk. –– Steve Steward