The 6000 block of Camp Bowie Boulevard has seen its share of restaurants come and go. The soul food restaurant Ridglea Jazz Café recently opened in the spot previously occupied by Ovation, another soul food joint. Ridglea’s dining room is oddly shaped, with a stage and pocket-sized dance-floor sandwiched between a wall and slick-looking bar counter. The only aspect of the place that calls up images of soul food is the smooth jazz piped in on what seemed like an excellent sound system. If you wait long enough most nights, the restaurant features actual live jazz, which is a bonus for that part of town. 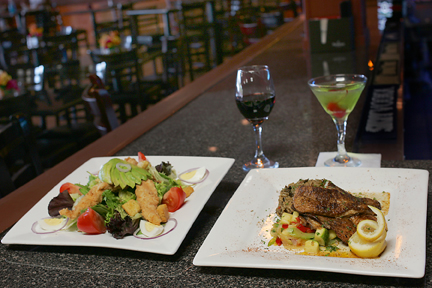 The creamed spinach and artichoke dip from the appetizer menu was deliciously cheesy and included non-stringy spinach with a moderate amount of artichoke in a béchamel base that had a bit of kick, courtesy of some spicy red pepper. The tortilla chips that came with the dish were sprinkled with a nice grill spice kind of seasoning: not too hot but salty-good.

All of the entrée-sized salads are named for singing divas, although I’m not sure how Peggy Lee reminds the chef of an overstuffed tomato (with your choice of chicken or shrimp salad). The Sarah Vaughan club salad was a mix of fresh spring greens with hard-boiled egg quarters and half an avocado sliced on top. The house strawberry vinaigrette accompanying the salad was a beautiful blend of sweet and sour. But the fried chicken “fingers” that topped it did little to help the dish. The batter was fairly bland, although the chicken breast itself was lovely and moist.

The same could be said of the meat in the chicken and waffles dish (listed on the menu as the “Belgium Waffle”). The bird was crunchy, juicy, and delicious, but the batter had no discernible flavor, no secret spices. The waffles were delightfully fluffy and served with blueberry compote and maple syrup. The dish comes with eggs –– we requested over-medium, and they were prepared correctly, if served plainly.

The big winner of the evening was the barbecue combo: brisket, sausage, and ribs loaded onto a plate with your choice of a side dish plus soup or salad. For our soup, we went with the gumbo, described by our server as chicken gumbo –– if the bowl contained any bird, we didn’t taste it. But there was a lot of sausage, swimming in a lovely spicy mix that wasn’t over-redolent of filé. We chose baked beans as our side. The waiter assured us they were made in-house, though the evidence on the plate suggested otherwise. They were just ranch-style beans with some cheese on top.

But back to the main point: The brisket was marvelous. Moist and with a massive smoke ring, the meat didn’t need the accompanying vinegary ’cue sauce to be tasty. However, the sauce was habit-forming — the more you dipped, the more you liked it. It seems odd to think that some of the best brisket in town might be at a soul food joint on Camp Bowie, but there you have it. The sausage was also tasty, with a peppery kick. The ribs, though, were a little dry.

The only two dessert items that are house-made, according to our server (who was proving himself a little inaccurate), were the chocolate-kiss brownie and the Southern-style cheesecake with bourbon sauce. The brownie, topped with a big scoop of Blue Bell vanilla, was a generous, delightfully moist, crunchy-chewy square of goodness. It was stuffed with pecans (a plus!), but we couldn’t find a single Hershey’s kiss in the mix. The cheesecake arrived unadorned, so we asked the server where the sauce was. He pointed to the three dollops of store-bought whipped topping. When we finally asked for extra, we received a tiny ramekin of the stuff — creamy, white, and uncooked, but that was OK, because the raw, unadulterated bourbon really enhanced the flavor of the smooth, rich cheesecake.

With so many soul food options on that side of town –– Drew’s Place, Edmondson’s Fried Chicken, and Button’s –– the question remains: What sets Ridglea Jazz Café apart? The late-night music is a plus, although if your dinner runs into showtime, conversation becomes difficult. Clearly, the Ridglea Jazz Café is going to have to take some giant steps in the kitchen to thrive.