In Amphibian Stage Productions’ slick, antic production of Billy Aronson’s contemporary sex farce The First Day of School, one character frets that it takes too much mental energy to maintain an extramarital affair. His wife replies that a big effort isn’t required, because “nobody wants to know what anyone else is doing.” This nicely sums up the complicity shared by Aronson’s characters –– they are all upper-middle-class parents whose own needs are neglected because of their obsessive attention to their children’s lives. In such a stifling suburban bubble, the adults benefit from a “don’t ask, don’t tell” policy regarding their sexual indiscretions. 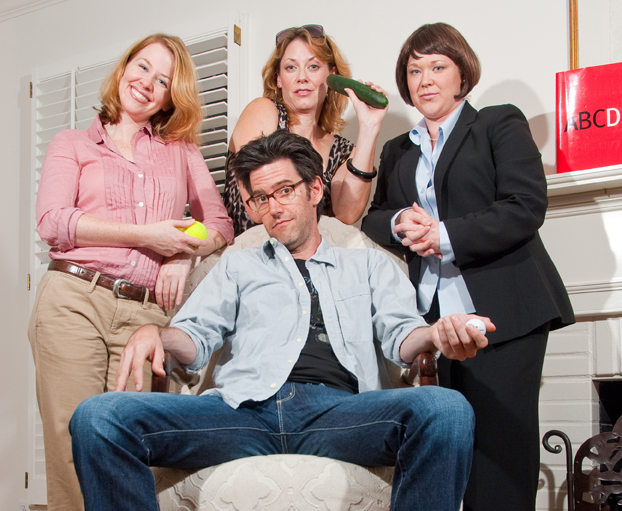 The horny bourgeoisie isn’t exactly fresh comic territory, so Amphibian director Evan Mueller and his cast have something to prove even before the first actor walks onstage. Can they find a surprising angle on the material or at least invest it with enough inspired energy to warrant another navel-gazing tour through the dynamics of infidelity? The performers display wicked enthusiasm and crack timing in abundance, but playwright Aronson has mostly just dressed up a standard Molierean romp about social hypocrisy with helicopter parents, the constant interruption of cell phones, and the peculiar 21st-century idea that life can be lived without hardship.

The First Day of School starts off on a roll with the spectacle of married couple David (Patrick Bynane) and Susan (Molly Lloyd) sexually propositioning other parents on the first morning of the new school year. They have a full day to themselves after a school brunch is abruptly cancelled, and both agree that no afternoon diversion looks as intriguing as nooky with a new partner. So Susan pops the question to Peter (a fidgety Marshall York), a sandal-wearing artist who sputters and stutters all the reasons why he can’t go to bed with her while simultaneously talking himself into it.

Meanwhile, David hits on Kim (Krista Scott), a stay-at-home mom and aggressive PTA volunteer who hints that she’ll agree to have sex with him only if he never actually uses the word “sex” or anything close to it. Puzzled, he turns his attention to Alice (Desiree Fultz), a neurotic lawyer at a fancy law firm who believes that every father at school events is trying to seduce her. (In this town, she may be right.)

Peter, Kim, and Alice finally wind up at the doorstep of David and Susan’s home (designed with an ultra-modern, geometric sense of camp by Kathleen Culebro and Alix Milne) for some mid-day adultery, only to discover that de-sublimating their sublimated libidos is a slow and agonizing process. Later on in the play, Kim’s teenage daughter, Belinda (Sydney Baumgart), and her boyfriend, Jonah (Alex Bush), arrange a hookup in the same home. They accidentally discover what middle-aged sexual adventure looks like, and, to their eyes, it ain’t pretty.

While Aronson’s script sometimes feels both underwritten and over-reliant on the same comic device –– namely, hyper-responsible grown-ups struggling to relax and enjoy naughty sexual shenanigans –– you could do a lot worse than to spend a summer evening watching Amphibian’s deft, utterly willing cast being led around by their loins. Scott as the powerhouse organizer who can speak about sex only in the language of school fund-raising and Fultz as the disappointed career woman eager for an erotic outlet are together worth the price of admission. Fultz, in her severe black bob, black business suit, and black high heels, was particularly delightful. Recounting a recent PTA meeting where shameless flirtation seemed to flow unchecked, she trembled with desire and finally shouted: “I’m sick of all the games!” If you’re willing to return to a very familiar playground, The First Day of School offers some reliable adult amusements.

The First Day of School