Small pickups are dicey on wet streets. Their lightweight rear ends can lose traction on slick surfaces, particularly during sudden stops. So Daniel Byram had to make a split-second decision last fall when a traffic light turned yellow during a rainstorm.

Should he coast through the intersection or hit his brakes and risk sliding sideways?

Byram coasted. Then he got roasted. 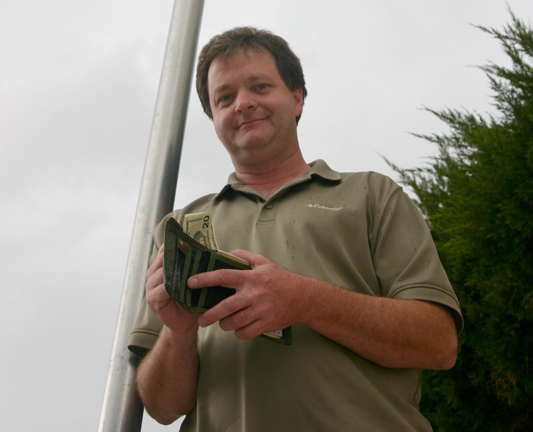 The city sent him a violation notice, complete with digital photos showing his 2000 Nissan pickup passing through a red light at Weatherford and Houston streets in downtown Fort Worth on Oct. 12. Byram figured he had a good excuse. He said he was driving at least 5 mph below the speed limit in a downpour. So he requested a hearing to argue that the ticket should be dismissed. Afterward, like many other motorists around the nation, he grew suspicious about the accuracy, fairness, and merits of the red-light camera program.

“The way that thing is done is ridiculous,” he said.

Cameras mounted at traffic intersections have motorists seeing red, money-crunchers counting the green, and Fort Worth officials firmly in support of the controversial devices.

The cameras not only catch motorists running red lights, they catch them failing to stop completely during right-hand turns — or failing to stop at a certain line, which seems nitpicky to some. For others, the cameras bring to mind a soulless Big Brother element, watching for lawbreakers but unable to use human reasoning or judgment. And many folks see hypocrisy in the way cities tout the program’s public safety aspects but really savor the revenue.

As a nationwide debate swirls over whether the cameras reduce accidents or serve primarily as a way to gouge taxpayers, Fort Worth’s red-light camera plan is pedal to the metal.

“The program is bringing awareness to drivers about how serious this problem is, and as a result they are driving safer — our statistics show that,” city traffic engineer Randy Burkett said.

Fort Worth officials haven’t blinked since approving the cameras in 2007. That first year, 15 were mounted at intersections. Another 10 were added in 2008, and 10 more in 2009. A study of the 10 cameras installed in 2008 showed a 72 percent reduction in crashes at those intersections, Burkett said. 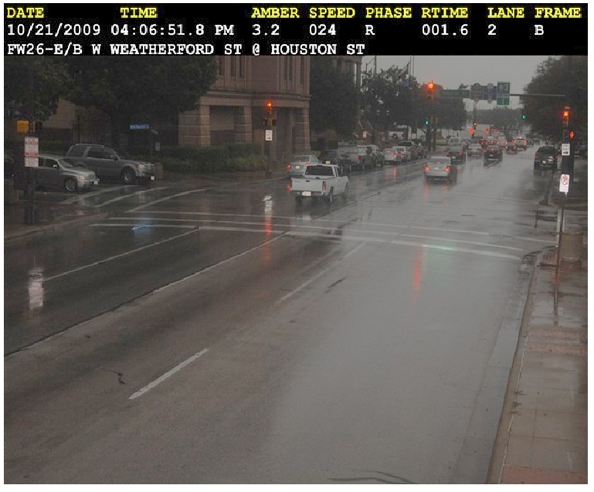 Byram decided to challenge his ticket, even though he’s no softie when it comes to running red lights. He rides a motorcycle when he’s not driving his pickup, and he’s had numerous close calls with motorists who try to beat red lights. But the yellow light that caught him on that rainy day lasted only 3.2 seconds, based on time-stamped information on the camera vendor’s online video.

A Texas A&M study in 2003 said increasing the yellow light duration by about a second could cut the number of red-light violations in half.

“If you’re going the speed limit, and everything is perfect, you can probably stop in 3.2 seconds,” Byram said. “But throw in some variables, and it’s not that easy — 3.2 seconds to react and throw on your brakes and stop is kind of optimistic when it’s not perfect driving conditions.”

Byram felt certain he could justify his actions at the rainy intersection. But the hearing didn’t go well. A city hearing officer ruled against him on Jan. 5 after a short meeting. Byram had one more chance — he could contest the hearing officer’s decision by submitting a notice of appeal at the municipal court.

Byram got his day in court. On March 22, he stood before Judge Stephanie Beamer. She saw the video evidence, saw him run the red light. “She found me guilty, and that was the end of it,” he said. “The only evidence they have is the video, so you’re guilty.”

Police officers can be reasoned with; cameras can’t.

Byram wasn’t happy with the appeals process or the judge’s unwillingness to consider extenuating circumstances. It angered him to pay $75 for a ticket he didn’t think he deserved. But tickets that go unpaid are turned over to a collection agency. He wanted to protect his credit.

“I sent the city a letter saying I was paying it under duress,” he said. “You’ve got no option. It’s a civil fine, and if you don’t pay it, they botch up your credit. They finally beat me down.”

Red-light camera violations are treated as civil cases rather than criminal, similar to how parking violations are handled. Most Texas cities allow municipal judges to hear appeals in these cases but don’t allow jury trials. Deputy City Attorney Gerald Pruitt said Fort Worth is the only Texas city he knows of that allows defendants to request a jury trial in red-light cases. He said well under one percent of such cases go to a jury — where citizens could end up having to pay court costs if they lose.

The red-light camera system seemed particularly arbitrary to Byram. For instance, the tickets are only $75 — about half as much as a fine for running a red light when the ticket is written by a police officer. And camera tickets don’t count against motorists’ driving records or affect their insurance premiums, unlike the tickets written by police officers. Setting up a system that way, Byram said, encourages people to just pay the fine and forget it.

Byram should save some venom for state legislators. Lawmakers set the lower fees for red-light camera tickets and made them civil rather than criminal offenses — after all, cameras typically record only the vehicle and license plate rather than the driver’s identity. Those same lawmakers are still wrangling over the cameras’ merits.

Meanwhile, voters in other cities and states are taking stands, and the future of red-light cameras hangs in the balance. Residents in some cities, such as Houston, Baytown, and College Station, successfully gathered signatures on petitions and forced a referendum to let voters determine whether to banish or keep the cameras. Houston voters will have their say on Nov. 2. College Station voters have already elected to kill the program. A couple dozen other cities and states have also banned red-light cameras.

In 2009, the Texas House of Representatives passed a measure to phase out the cameras, but it died in the Senate. Rep. Solomon Ortiz Jr. of Corpus Christi, a leader in the push to quell the cameras, said many cities view them as revenue generators rather than a public safety measure.

“City budgeters are counting on these fines as a revenue stream and simply using the argument of safety as cover,” he told The Dallas Morning News earlier this month.

Studies have drawn various conclusions. A U.S. Department of Transportation study in 2005 found that red-light cameras offered only a modest increase in safety. Other studies show that cameras reduce T-bone collisions but can increase rear-end collisions because of drivers slamming their brakes at yellow lights.

Fort Worth City Council member Chuck Silcox began touting the program in 2005. At the time, Garland was the only Texas city with red-light cameras. Silcox’s council colleagues recalled close calls in traffic incidents involving red-light runners, and they enthusiastically backed his plan to mount cameras at busy intersections.

Fort Worth signed a five-year contract with American Traffic Solutions, a Scottsdale-based vendor with 1,100 cameras set up in the United States and Canada. The vendor monitors the cameras and forwards information on violations to the police department for review. If police agree that an infraction occurred, the civil citation is mailed to the person who owns the vehicle in question.

The city sends out about 4,000 violations a month, but only about 56 percent of violators pay their fines. City officials said the minimal amount of revenue left after expenses goes for traffic safety projects.

And while Byram lost his appeal, many other motorists are more successful. Of cases that go before a city hearings officer, 26 percent are found not liable, Burkett said.