With all the breast-beating and rending of garments that one periodically hears regarding the state of “the scene” here in the Fort, it’s worth remembering that DIY venue 1919 Hemphill has been in operation since 2002, making it the longest-lived DIY music spot not just in Fort Worth but in all of North Texas. Divorcing art from commerce (or more to the point, live music from the selling of alcohol) might not seem like a recipe for long-term success, but after seven years, the plucky little Southside room is still standing tall. 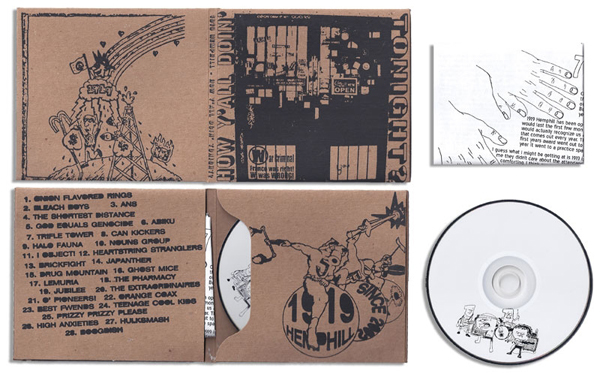 Run by volunteers, hot as a blast furnace in summer, cold as a meat locker in winter, with a parking lot the size of your ass pocket, it’s a place where you’re likely as not to get panhandled by a gentleman with a really cute dog but also likely to hear music you won’t hear anywhere else in the city. Bands from all over the nation clamor to play there just to be able to say that they have. If Woody Guthrie were a young man today, he’d be playing spots like this one.

And the 28 tracks on this comp —- all contributed by bands that have played 1919 in the last four years — attest to both the diversity (activating pop and folk as well as punk pleasure centers) and overall quality of the acts that have blown up against 1919’s graffiti-emblazoned walls.

How Y’All Doin’ Tonight? is the kind of compilation that invites repeated spins because there’s so much variation from track to track. The only way you’re going to get a copy is by going to a show, so you know what to do.