Unfortunately, the boss failed to see how this proves that Chow, Baby’s expense account should now be doubled or even tripled and instead proposed to ease the fiscal crunch by treating Chow, Baby to lunch on her own much bigger dime. Hmm. Hmm. How could Chow, Baby profit the most from this offer? 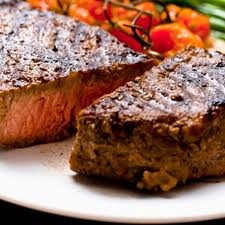 Unfortunately for exploitative purposes, the 22-ounce cowboy-cut rib-eye ($49) is dinner-only at Bailey’s Prime Plus (2901 Crockett St.); sadly, the most Chow, Baby could blow on a lunch entrée was a mere $23, for the 6-ounce filet mignon. Server Laura volunteered the steak’s provenance: supplied by the legendary Allen Brothers out of Chicago, Chow, Baby’s favorite USDA Prime vendors. (That’s just reputation halo, of course; Chow, Baby probably couldn’t pick their beef out in a blind taste test, though it sure would like to try.) Certainly the filet was marvelously tender and flavorful, but Chow, Baby, having strayed outside its rib-eye expertise, had the usual is-it-me-or-is-it-them angst: The filet, ordered medium rare, was neither juicy nor particularly pink — is that the fault of the cut or the cook? Probably the latter; in the four months since it opened in the West 7th development, Bailey’s has already gained a foodie-blog rep for inconsistent beef-doneness nailing.

The boss’ grilled salmon ($12), though, parted into lovely, perfectly cooked planks; Chow, Baby didn’t realize at first that it was supposedly “blackened,” but the scant spices did meld nicely with the buttery fish. A similar cultural translation problem had arisen earlier with Chow, Baby’s starter of shrimp cocktail ($12), five three-biters that came with a trio of sauces: guacamole (for some reason), a mild cocktail sauce, and a … hmm. Definitely has Creole mustard in it, but … “Laura, what’s this sauce?” “It’s sort of like a remoulade.” Why yes, it was indeed sort of like a remoulade. And great as a dip for the addictive red and gold Peruvian-potato chips that had been set down at the beginning of the meal while we got comfy in our high-backed, gold-embroidered, black velvet booth. The whole place is luxurious, with huge chandeliers, sheer drapes (with this lousy view, they really ought to be thicker), an inside water feature, marvelous your-wish-is-my-command service from Laura  — perfect for people who have princess fantasies, and don’t try to say you don’t.

Alas, Chow, Baby’s greedy plan was a failure. Yes, its total lunch, including tax, tip, and tangy lemon crème tart ($5) for a luscious midnight snack, came to a whopping $50 — twice Chow, Baby’s $25-per-meal allotment, proving again why Chow, Baby’s budget really should be doubled. But that $25 figure assumes two restaurant visits per column, and Chow, Baby didn’t eat any other “food away from home” this week — meaning that with just a bit of creative expense-averaging, Chow, Baby could have covered its meal its ownself. So all Chow, Baby really gained from its visit to Bailey’s was a lavish lunch and the pleasure of the boss’ company? It’s a lousy world.