When filmmaker Laura Tabor-Huerta was an Arlington high school student in the early 1980s, punk was for the freaks. “It was just me and this one other guy” who were interested in the most adventurous sound –– and style –– of the day, she recalled. But to her, the burgeoning punk scene was a provocative world, far different from the normal one, populated by boy bands and hair-metal groups as it was.


Exploring the Deep Ellum area (then relatively free of cops and crime) and its venues, like the Twilight Room and Circle A Ranch, defined her youth. Now, after nearly 30 years of punk shows and a decade of production work, Tabor-Huerta has released DFW Punk, a documentary about North Texas’ heyday as a haven for the angry and the unusual. 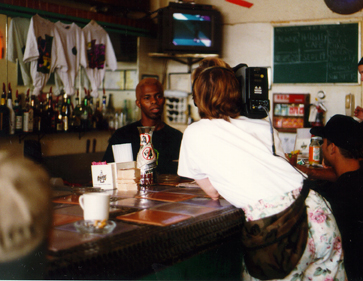 Tabor-Huerta got the idea to make the film while a bona fide member of the local scene. She knew the people and the places and could lend an insider’s perspective to the subject. The gap between inspiration and actualization was a tad greater than she anticipated, though. “I didn’t have the money, and I was just living that life so much,” she said about the rest of the ’80s. The aspiring filmmaker did manage to step away from the never-ending punk social hour long enough to earn a fine arts degree from the University of Texas at Arlington. When she was ready to shoot, she discovered that actually making a movie is an enormous task.

By 1995, she had scrounged up enough money from a full-time production job to buy a SVHS camera and microphone. On weekends, she ventured into the clubs and conducted interviews with the scene’s most popular acts, including MC 900-Ft. Jesus, Why Am I?, and Superman’s Girlfriend. With a volunteer crew and a boom stand made from a pool-cleaning pole, Tabor-Huerta interviewed nearly 50 diverse representatives of the local punk world.

Toward the end of the filming process, after Tabor-Huerta had relocated to Austin from Arlington for personal reasons, she began looking for ways to transform her raw footage into an actual movie. In the late 1990s, editing a film would have cost well into the thousands, and working in production didn’t allow for such an expensive hobby. She spent hours searching for artists’ grants and soliciting help. But technology eventually caught up with her aspirations. By the oughties, she got hold of some of the fancy new film-editing software that had hit the market and did the grunt work herself.

By the first screening of her documentary, at the Dallas Film Festival in 2008, many of the film’s main subjects had forgotten all about the project. Still, through the film’s 68 minutes, viewers can get a picture of the bands and the fans who made the scene so vibrant. “The scenesters were so important and interesting,” Tabor-Huerta said. “Other documentaries make the mistake of filming from an only musical standpoint. … You have all these musicians, yet something is missing, and you can’t put your finger on it.”

In DFW Punk, Tabor-Huerta gives props to some her favorite bands, including Sedition, The Nervebreakers, and No Excuse, and the people with whom she experienced the local punk movement. Throughout the film, she offers sounds, sights, and the “interaction” that ties everything together. “The scene was much broader than a bunch of guys making music,” she said. Music may have been the centerpiece, but punk was also an evolution of perspective.

Punk, with its furious, tight songs and futuristic-looking homemade clothing, started in the early 1970s as a backlash against flamboyance in rock ’n’ roll. By the time Tabor-Huerta was making her foray into the local punk world, an unofficial second generation had taken the initial punk style and made it madder and heavier. “It was a reaction to the press,” she said, referring to certain bands’ drive to break the control exerted over music by mainstream media.

Separation from large-scale social movements defined some punks. “Some people don’t want to attach the scene to politics,” she said, “but … people were angry. In Dallas, there were intelligent people in the punk scene singing songs about [the political climate]. There was also a large contingency not focused on anything other than getting drunk and going to shows.”

An interest in film and a personal history of punk have combined into a unique look back at what is an often-forgotten part of local music history. “I never considered doing anything else,” she said about her choice of punk as a film subject. “I felt like the scene was hidden from the rest of the U.S. Dallas was on TV, and everyone saw Texas as a place just full of cowboys.”

By chronicling the underworld of late-20th-century Texas life, the filmmaker hoped to show the rest of the world that Texas was about more than oil money and false congeniality.

Although she probably didn’t realize it at the time, Tabor-Huerta also captured the last days of a music world unaffected by the pervasiveness of the internet. Since mainstream media tended to ignore punk culture and since radio stations preferred to spin other kinds of music –– though, locally, punk could be heard occasionally on KNON/89.3-FM –– local punk scenes remained secretive and underground for the entirety of their existences. “You were lucky if someone gave you a mixtape,” she said.

While local music is easily available to anyone with a computer, it took the effort of someone like Laura Tabor-Huerta to bring Texas punk back to life. Her film has screened once in Fort Worth, last year at 1919 Hemphill, and she’s wishy-washy about scheduling it again here. But anyone who’s interested will soon be able to find the film in its entirety on –– where else? –– the internet. l