All you need to know about The Expendables is that it delivers exactly what you would expect, no less and no more: terrible dialogue, macho posturing and male bonding, flying bullets and explosions, and enough testosterone flying around on the screen to spatter audience members sitting in the first few rows. Once you make peace with that, the movie’s halfway enjoyable. 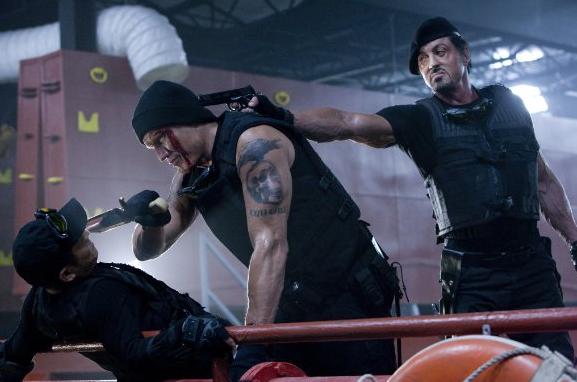 In addition to co-writing the script and directing, Sylvester Stallone stars as Barney Ross, the leader of a group of multinational soldiers for hire. When a mysterious front man (Bruce Willis in a cameo appearance) offers Barney a sack full of cash to travel to a fictitious Latin American banana republic and overthrow the generalissimo (David Zayas), Barney and his knife-throwing British second in command Lee (Jason Statham) head there to do some recon. They quickly figure out that the job is a setup, but when they realize that they’ve placed a beautiful local resistance leader (Brazilian TV star Giselle Itié) in mortal danger, they go back with the rest of their squad and plow through hundreds of enemy soldiers to rescue her and get to both the dictator and the American baddies propping him up.

Now a hopeless plastic surgery casualty as an actor, Stallone the filmmaker does well enough with large-scale pyrotechnics like the sequence when he escapes the country by blowing up a whole pier with a bunch of enemy soldiers on it. He doesn’t do so well with the hand-to-hand combat scenes requiring a nimbler directorial touch, most of which feature Statham and Jet Li as the group’s martial arts expert. The climactic sequence features a showdown between UFC champ Randy Couture (as the group’s demolitions expert) and WWE wrestler Steve Austin (as the bad guy’s henchman), and there’s no sense of any contrast between these guys’ fighting styles.

Then again, nobody’s going to see this film for its formal stylistic qualities. This movie has the feel of a bunch of rock stars getting together to form a supergroup — those things rarely add up to the sum of their parts, but such experiments are usually fascinating even when they fail. In addition to the above talent, the movie gathers together Terry Crews and Stallone’s Rocky IV nemesis Dolph Lundgren as other members of his squad, plus Mickey Rourke as a retired soldier who now serves as the crew’s booking agent. Stallone (with co-writer Dave Callaham’s help) can’t resist writing in an in-joke-laden scene for himself, Willis, and Arnold Schwarzenegger as Barney’s former friend turned professional rival. This summer has brought us lots of movies about same-gendered friends in their 40s getting together and commiserating about how young they used to be (Grown Ups, Sex and the City 2). Though this movie traffics in ’80s and early ’90s nostalgia, Stallone and his middle-aged co-stars don’t have time for all that. They do their thing and go home, an attitude that’s much easier to roll with.