The insinuating Swedish vampire movie Let the Right One In took the world (including the 2008 Lone Star International Film Festival) by storm, and ever since an American remake was announced, fans of Tomas Alfredson’s original have been fretting over whether the new version would do justice to it. That new version is called Let Me In, and I’m pleased to report that Matt Reeves has done an amazingly faithful job of adapting the Swedish movie for our audiences. 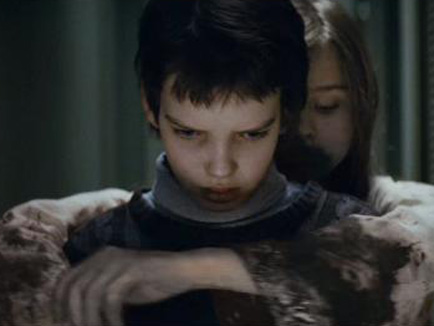 Instead of Stockholm, this movie is set in Los Alamos, N.M., in March 1983, a depressing, conformist version of Reagan’s Middle America blanketed by endless winter. That’s where 12-year-old Owen (Kodi Smit-McPhee) lives in terror of the school bullies who single him out for abuse. His divorced alcoholic parents offer no help at all, so he’s grateful to meet Abby (Chloë Grace Moretz), a girl his age — or so it seems — who moves into the apartment next door. She has strange habits like walking around in the snow in her bare feet and not coming out at night. She turns out to be behind a string of murders in town, but that doesn’t stop Owen from falling in love with her.

This movie is done in a completely different style from the sci-fi monster flick Cloverfield, which Reeves made a big splash with two years ago. Instead of filming this in a vérité style, Reeves takes a slow-burning approach similar to Alfredson’s, and horror fans who aren’t familiar with the original might have a hard time getting used to the relative lack of action here. In addition to the pace, Reeves carefully mimics the original’s camera angles, sets, and tiny details like the Rubik’s Cube that Owen gives Abby early on. Cinematographer Greig Fraser photographs the setting imaginatively, bathing the scenes between Owen and Abby in a soft, golden light that you don’t often see in horror films.

The delicate romance that blooms between the boy and the vampire is something else that most horror movies don’t do. The implications of love with the undead are treated with cold-eyed realism. (In this respect, both the Swedish and American versions of this film are far superior to the Twilight movies.) When Owen eventually watches Abby kill a guy, both he and the audience see that she’s a monster as well as a savior. Moretz is best known for playing the gleefully murderous Hit Girl in Kick-Ass, but here she plays the vampire as a being with stiff, stilted manners who’s unsure how to relate to humans. The child actors play their scenes with an unexpectedly moving innocence, and help the movie duplicate the most fragile thing about the original: its mood.

Given that foreign films like Let the Right One In are easier to find than ever, one may ask why this movie needed to be remade if Reeves was going to copy the original so closely. The hard truth is that there are moviegoers who won’t go to a movie with subtitles (their loss). Let Me In performs much the same function as the 2002 remake of The Ring, an English-language version that brings a brilliant foreign horror flick to a new crowd without significant damage to the original’s vision.