Home Film Film Reviews Driving the Limit
SHARE
Facebook
Twitter
You could hear the tiniest stirrings of something on the internet about Cars. Not necessarily a backlash but something smaller: criticism of the movie’s trailer, saying the jokes were too cutesy and the cars with eyes in their windshields didn’t look great. (“Happy Meal rejects,” sniffed fametracker.com.) Yeah, and when Michael Eisner first saw Finding Nemo, he didn’t think it would make any money. 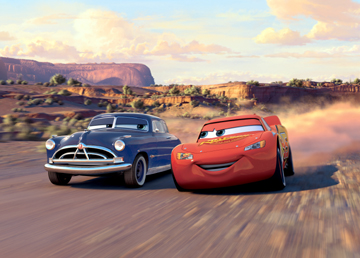 This is where we are, ladies and gentlemen. Pixar has been so good for so long that its success has become something of a trap. People have stopped appreciating the gold standard of animation firms and started looking for signs that their movies aren’t as funny, inventive, or good-looking as they once were. This is sad, even though it’s human nature to wonder how long they can keep up their winning streak. Someday, when it’s all over, everyone will look back and marvel at their amazing run. I say, why wait for that day, especially when Cars continues the streak in high style?

The movie takes place in a world populated entirely by cars. Real-life human celebrities and characters from other Pixar films show up in automotive form, and even the insects flying around are tiny winged Volkswagen Bugs. The main character is Lightning McQueen (voiced by Owen Wilson), a brash, reckless prima donna of a racer who’s angling for a championship in his first season on the pro circuit. This part of the movie feels a bit undernourished; the thinly veiled portrait of NASCAR, its fans, its atmosphere, and the chase for sponsorships isn’t pointed enough to be satirical and isn’t interesting enough taken straight.

The film finds its groove only when it leaves the racing world’s bustle and strands Lightning in Radiator Springs, a town that has gone from boomtown to boondock, somewhere on the legendary Route 66. He falls foul of Doc Hudson, the 1951 Hudson Hornet who serves as judge (voiced by Paul Newman in a great turn as a grumpy oldster hiding his past) — a traffic court judge, naturally — and is sentenced to community service, resurfacing the badly torn-up road leading into town. We’ve seen this story in hundreds of other movies, the one about the city slicker who finds his way to the hinterlands and discovers the best part of himself by hanging out with decent plain folks. The fact that these characters are cars rather than humans proves to be just enough to make the story fresh.

The few remaining inhabitants of Radiator Springs are suspiciously diverse for a such a small group in a nowhere town, but as we’ve come to expect from a Pixar film, they’re all exceptionally well-characterized. The actors giving them voice include Cheech Marin as a low-riding 1959 Chevy Impala who owns the town’s paint shop, Tony Shalhoub as a 1959 Italian Fiat who sells tires and only follows European auto racing, and George Carlin as a permanently stoned 1960 Volkswagen bus who brews his own organic fuel. (“‘Cause the oil companies have their grip on the government. They’re feeding you a bunch of lies!”) Coming close to stealing this movie outright is none other than Larry the Cable Guy as a rusty tow truck named Mater (short for “Tow-Mater”) who’s good for at least two huge laughs every time he shows up.

Unlike in other Pixar entries such as Finding Nemo and the Toy Story films, the ensemble takes a back seat here. The main story goes on between Lightning, Doc, and a 2002 Porsche 911 named Sally (voiced by Bonnie Hunt) who acts as the town’s lawyer and Lightning’s new romantic interest. They all turn out to be refugees from the fast lane, and the film is shot through with a palpable nostalgia for a time when life and driving were slower. Sally takes Lightning to an abandoned luxury hotel and waxes lyrical about how Route 66 moved with the land and put Radiator Springs on the map, whereas the nearby interstate cut through the land and bypassed the town. In this sequence and others, the mountain and desert scenery is breathtaking, and it took me a couple of viewings before I remembered that it was all computer-generated.

Of course, therein lies the contradiction. The filmmakers (including director John Lasseter, who did the original Toy Story) from a firm that pioneers digital-effects technology are sharp enough to know that they can’t get away with a straightforward paean to the simple life. Lightning eventually returns to racing, and his experience allows him to react properly in the big race when things break his way and when they don’t. In the end, though, this movie isn’t about what happens in the end. It’s about a sequence when Lightning and Mater go to a pasture and tip over tractors instead of cows. This does nothing to advance the story, and it’s only here because it’s a funny and memorable bit in a movie that’s all about savoring such moments. The makers of Cars would never be so banal as to say it, so I will: Life is the journey.

Oldster vs. speedster: Doc Hudson challenges Lightning McQueen to a race in ‘Cars.’