Mao’s Last Dancer is the ultimate rags to riches saga. The film is based on the life of dancer Li Cunxin. Born dirt-poor in a remote Chinese village, he made it halfway around the world by age 20 to become a principal dancer with the Houston Ballet. The remarkable tale was chronicled in a bestselling 1995 autobiography of the same name and caught the eye of director Bruce Beresford (Driving Miss Daisy), who wanted to film the story after finding a suitable Chinese dancer/actor. With the help of Cunxin, Beresford picked Chi Cao, a graduate of the Beijing Dance Academy and newly minted principal dancer with the Birmingham Royal Ballet. 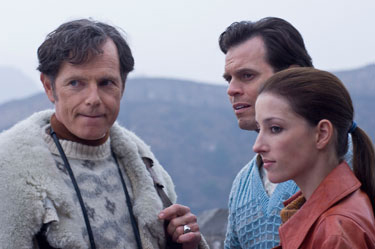 Cao is ideal here. A marvelous dancer, he captures the strength and sensitivity of the young Cunxin –– and his confusion –– as he struggles to assimilate a foreign culture and a political philosophy at odds with the Maoist ideals that had been drummed into his head since birth. Cao came a generation later, well after Mao’s death, and faced few of the obstacles overcome by Cunxin. He consulted the elder ballet dancer regularly to ascertain his thoughts and emotions during his turbulent years.

Seeing the story unfold is like watching the hand of some benign fate leading Cunxin toward a preordained destiny, one that began with Madame Mao’s decision to open a ballet school in Beijing –– not for love of dance but to add dimension to the staged propaganda spectacles beloved by her husband. In true bureaucratic style, hundreds of delegates, none of whom knew anything about ballet, were sent out in the dead of winter to scour the countryside for likely dance students. Cunxin, undernourished and underdeveloped, was herded along with thousands of other youngsters to the nation’s capital to try out for one of 40 openings in the school. Against all odds he made the cut. Unlike Billy Elliott, the hero of another dance film, one that traces the journey of an English coal miner’s son from obscurity to a Tony-nominated Broadway success, Cunxin had no passion for ballet. He didn’t even like it. “I think it’s boring,” he says at one point. “I don’t understand it.” But the housing was comfortable, the food plentiful, and to honor his family he worked hard at perfecting his skills. It was only later, when he saw a smuggled video tape of Mikhail Baryshnikov dancing, that a lightbulb went on, and he became hooked on ballet.

Enter fate again, this time in the form of Ben Stevenson (Bruce Greenwood, looking amazingly like Stevenson 30 years ago), then artistic director of the Houston Ballet and now director of Texas Ballet Theater in Fort Worth and Dallas. The film is hazy about how he first came to China, and I asked Stevenson this week where it all began. “Columbia University was invited by the Chinese government to put together a fine arts delegation to tour China, and I was asked to join,” he said. “When I got to Beijing and saw the ballet academy, I begged off the rest of the schedule and spent my time there to encourage the program.”

On a third China trip he suggested that the academy send two students to Houston for an intensive summer internship. (The film reduces the number of students to one, Cunxin.) Stevenson had no choice in who was selected, and it was Cunxin who showed up on his doorstep. In the course of the summer, the dancer had great success filling in for an injured principal dancer on a few hours’ notice and secretly fell in love with one of the secondary ballerinas (Elizabeth Mackey, played by Amanda Schull).

To Stevenson’s horror, the day before Cunxin was to return to China, he announced he had married and was not going back. Stevenson, convinced there would be no problem in Cunxin returning to the States later on, saw his plans for collaborations between the Houston Ballet and the Chinese academy coming unglued. But Cunxin was adamant. He insisted on going to the Chinese consulate to advise officials of his decision. There he was promptly locked in an upstairs bedroom and told he was going back to China, like it or not. The ensuing contretemps made its way to Washington before the Chinese blinked and Cunxin was allowed to stay. He went on to a 16-year career as principal dancer with the Houston Ballet. (The marriage didn’t prosper. He had old-world visions of a dutiful wife, cooking, cleaning, and focusing her life on his needs, and she wanted to pursue a career. They eventually divorced.)

Filmed in Australia, Mao’s Last Dancer is dotted by a number of brief dance sequences, including an over-the-top recreation of a Mao-era political blowout with cannons and fireworks that’s a hoot. The dance scenes (including some bizarre Swan Lake excerpts) are handled by the Australian National Ballet.

The lyrical ending smacks of a 1940s musical and may not be to everyone’s taste, but I enjoyed it. The film is a stunning testament to the human spirit and its ability to succeed against unbelievable odds. I left the theater feeling remarkably uplifted. Mao’s Last Dancer is screening only at the Modern Art Museum of Fort Worth and only this weekend.