Medical records, a woman who refused to be silenced, and state laws have led regulators to take action against a gas well site near the University of Texas at Arlington.

After a two-month investigation, the Texas Commission on Environmental Quality has concluded that pollution from that well site, one of the richest in the Barnett Shale, is responsible for worsening nearby resident Sandra DenBraber’s health problems. Last week the agency issued a notice of violation against the well operator, Houston-based Carrizo Oil and Gas.

The ruling is believed to be a first, since it was based on medical records rather than high levels of pollution. But observers say it may change nothing for DenBraber in the near term because of expected appeals by Carrizo. 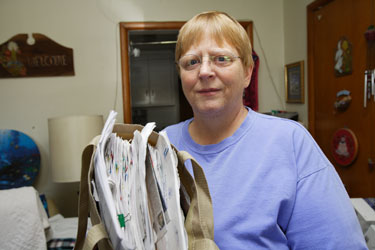 TCEQ began its investigation of alleged violations after receiving multiple complaints and new medical documentation from DenBraber. The Arlington resident, who has severe chemical sensitivities, lives within 600 feet of  the well site.

According to TCEQ records, this is also the first enforcement action to be brought against Carrizo and the first violation for Carrizo’s UTA-owned site, which now contains 22 wells. The site has made news in recent months because of its productivity and the almost $6 million in royalties it’s earned for UTA. That doesn’t include Carrizo’s recent $5 million donation to the university.

Investigators from TCEQ’s Region 4 office visited the site multiple times over the course of the two-month investigation, according to the agency’s investigation summary. On several occasions, their equipment detected emissions of compounds associated with natural gas production, but levels were determined to be below safety thresholds established by the agency.

However, Tony Walker, director of the Region 4 office, said investigators were able to confirm that the emissions contributing to DenBraber’s serious health problems were emanating from the Carrizo well site and ruled out any other potential sources.

With a source pinpointed, investigators turned their attention to DenBraber’s medical records. “They requested copies of all my records, my treatment records, my blood work I’d had done last December — everything,” she said. DenBraber has suffered from chemical sensitivities for years. In 1985 she was let go by Northeast Community Hospital where she’d been working as a registered nurse, after an encounter with a heavily perfumed patient left DenBraber herself hospitalized.

Those records included a letter from DenBraber’s longtime physician, Dr. Alfred Johnson, stating that “it is my medical opinion that [DenBraber’s] current illness and inability to recover is related to her constant and continual exposure to diesel exhaust fumes  and other chemicals associated with the oil and gas drilling/fractionating and compressor station.”

In the letter, Johnson wrote that DenBraber’s medical condition had been stable and regulated by the precautions she’d undertaken in keeping her home chemical-free — up until the summer of 2008, when Carrizo began operations in earnest.

Gas production activities during that period left DenBraber suffering from headaches, breathing problems, and other symptoms of chemical exposure requiring multiple hyperbaric oxygen treatments and other care. Emissions from the site, which frequently triggered her carbon monoxide detectors, left her afraid to go to sleep for fear she might not wake up again.

With the treatment records and the results of a test showing the presence in DenBraber’s blood of ethylbenzene, xylenes, hexane, and other neurotoxins associated with the production of natural gas, TCEQ investigators had enough to move forward, Walker said.

Despite the fact that TCEQ’s air samples showed that pollution from the Carrizo site did not exceed allowed levels, field investigator John Malick concluded that the Carrizo site was in violation of administrative and health and safety codes because it was discharging “one or more air contaminants or combinations thereof [that] are or may tend to be injurious to or to adversely affect human health or welfare.”

Because of the alleged harm to human health, the violation won’t be handled through TCEQ’s typical violation notification process, which allows operators to correct any problems to bring the site into compliance. Instead, it is being referred to the agency’s enforcement section as a major violation, Walker said.

Carrizo will be given a chance to contest the findings of the investigation through an administrative hearing, but if the violations are sustained, the company could be assessed administrative fines in addition to being required to take corrective action at the site.

Kristin Sullivan, assistant vice president for media relations at UTA, referred questions about the TCEQ findings and their implications for the health of area residents to Carrizo’s spokesman. In an e-mail, she said that in the past three years, “Carrizo has demonstrated an unwavering commitment to the responsible development” of UTA’s gas resources and that the company has an excellent track record of adhering to local, state, and federal regulations. She provided a copy of the university’s contract with Carrizo, which requires the company to “use the highest degree of care and all reasonable safeguards” to prevent soil, water, and air pollution or contamination.

Carrizo declined to comment on the alleged violations but released a statement through a spokesman. “Carrizo Oil and Gas, Inc. is proud of the excellent track record with regard to adherence to all applicable federal, state, and local regulations we have demonstrated in all of our operations,” the release said. “We strive to maintain the balance of good business sense, good environmental stewardship and good community relations in the areas where we live and work.  Carrizo will continue to pursue the highest standards of compliance while strenuously defending ourselves from meritless claims — through the appropriate process.”

TCEQ spokeswoman Andrea Morrow said that, despite the agency’s finding, the case could drag on for years if Carrizo chooses to contest an enforcement order in court.

Ken Morgan, director of TCU’s Energy Institute, said he isn’t particularly surprised by the conflict between Carrizo and residents such as DenBraber. “When you get too near in to people in urban settings, it’s almost inevitable to see problems between residents and drillers,” he said. “I think companies are becoming more sensitive to the impact on communities.”

At the same time, he said, the pressure on local communities may be easing somewhat because the Barnett Shale isn’t as big a target for companies as it once was.

“Two years ago, the Barnett Shale was thought to be the place to be for drillers,” Morgan said. “We’ve since learned that these areas [with shale formations from which gas can be produced] are more common than we’d thought, and now the Eagle Ford in South Texas is the hot play.” Shale drilling, through the process known as hydraulic fracturing or “fraccing,” is being done in many areas of the country, usually followed by concerns over health effects and possible environmental degradation.

For now, DenBraber says that while the TCEQ ruling is a vindication of her struggle of the past three years, not much has changed.

“At this point, they’ve just put me through so much, I don’t know what it would take for me to feel it’s been resolved,” she said. “I’m just wondering how much longer I’ll have to deal with the health impacts while having Carrizo tell everyone I’m just looking for a check. They say I want the money — I just want my health.”