I woke up Monday morning thinking it was Tuesday. I’m sure you’ve done this before for various reasons. Maybe you had Friday off, and the long weekend threw off your schedule. Maybe you went into a coma on a Monday and woke up 364 days later. Both of those are confusing situations and perfectly good reasons for getting your days mixed up. It’s all about context, I guess. Good thing too. My reason for getting my days mixed up is because on Sunday night, I got drunk at a hair salon. 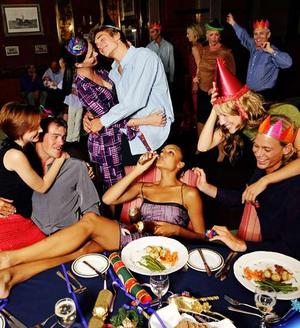 I know, I know. I’m not supposed to romanticize public intoxication, so consider this a cautionary tale on the perils and sadness of binge drinking. Still, it’s kind of a funny story.

See, Shampoo Salon, on the West Side, turned 10, and my friend Squirt was bartending the anniversary party. She said there was going to be a free keg and some kind of vodka punch. In other words, this was a classier version of every party I ever went to before I turned 21.

Three of us –– Squirt’s boyfriend, a second buddy, and I –– rolled up to Shampoo around 8:30 p.m. We were immediately greeted by Josh, Shampoo’s owner, and pointed in the direction of the Tacoheads trailer, temporarily away from its dock behind 7th Haven. We went for cups of punch instead. At least the stuff came out of a big thermos rather than a trashcan.

The Shampoo party was really going off. There was a good-sized crowd in the converted house and outside. A backdrop had been set up in the front room, and a photographer was trying to catch people jumping in mid-air. There was a snack bar. After a couple of punch refills, we walked around to the parking lot in the back. Near the fence, stacks of paintings were piled around a huge canvas that this guy with Willie Nelson braids was working on. In the middle of the lot was a long coffee table. At either end, people were getting styled on the fly, but I kept my hat on. I’m about three months away from looking like a late-’70s Jimmy Buffett, and I’d like to keep it that way. I did, however, take interest in the palm reader, whose table was situated near the back door by the keg. The palmist’s line was pretty long, so I had plenty of time for a couple beers. By the time I sat down at her table, I’d probably had like three or four and had made as many trips to the punch station. The palmist took my hands in hers and looked deep into my eyes. I nodded enthusiastically at whatever it was she was saying. I hope that none of it was particularly revelatory because I totally missed it.

My friends got tacos, and I went inside. The house bumped with the kind of music you’d expect at a hair salon anniversary party. Black Sabbath it wasn’t, but I didn’t care because I was having a blast. I cruised around with the giddy buzz of a college freshman at his first off-campus party. I ate a crapload of chips and guacamole.

Around midnight, someone folded me into a car, and we went back to my house. I melted into a deck chair on the porch and hoped to pass out. I sat there thinking about every ridiculous facet of my predicament: 32 years old. About to pass out in a bamboo chair on a front porch. After bingeing like an 18-year-old. At a hair salon. The mellow mood I’d maintained an hour ago had curdled into a really unpleasant drunkenness, and it was only a couple more minutes before I was blasting punch-flavored puke over my porch railing.

Needless to say, when I figured out what day it was, I decided to take a break. I think I’ll stick to club soda this week. –– Steve Steward