As the administrative honchos of the Fort Worth Symphony Orchestra and the musicians’ union continued their behind-the-scenes contract negotiations last week, the orchestra itself played a slam-dunk program that blew the feathers off the Bass Performance Hall ceiling. 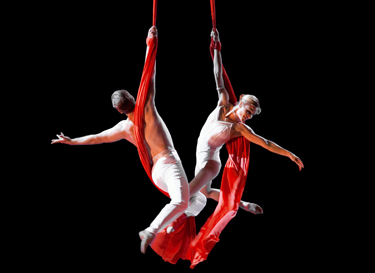 Actually, it wasn’t the orchestra but its guests –– circus acts from the phenomenal Cirque du Soleil, performing under the name Cirque de la Symphonie –– who caused the commotion. Juggler Vladimir Tsarkov did wonders with plate-sized rings, even bouncing them off the floor, and with tenpins illuminated by multicolored lights. Irina Burdetsky made hula-hoops look simple, standing seductively and smiling as the barest twitch of her midsection, hip, thigh, or shin kept the hoops in motion. (How did she keep from gagging when she got to the neck?) Aerialists Christine Van Loo and Alexander Streltsov worked with double streams of hanging fabric hoisted overhead — hers the more athletic performance, featuring contortionist splits and sudden releases, while his was graceful and almost balletic as he soared over the orchestra like a modern-day Icarus. (Neither used a net.)

But it was the strongman balancing duo of Jarek and Darek, working in gold body paint and Speedos, that had the audience roaring approval by the end. It’s not asking much of a trained athlete to vault onto another’s shoulders and do a handstand. But to have a partner squat down with his back to you so you can put your hands on his shoulders and then by sheer willpower raise yourself to a handstand is something else. For him to slowly stand up without a bobble takes it a step further. One man rested a hand on the other’s shaved head, let his body lean to the side so that it was parallel to the floor, and then released his other hand –– you had to see it to believe it. Reversing the sequence, all in slow motion, seemed even tougher, but they did it, along with a bunch more tricks, all to the music of Ravel’s Bolero –– and repeated ovations.

To make way for the circus soloists, particularly the aerialists, the musicians were pushed upstage and the stage shell omitted, which meant amplification was needed to boost the sound. The results were like my pet peeve of the orchestra’s Summer Concerts in the Garden series: The music was too heavily miked and sounded canned.

Conductor Ron Spigelman, looking remarkably svelte, poured all of his trademark energy into the performance and kept the evening flowing with a medley of classical favorites, delivering one of the most entertaining evenings in recent memory.

In the meantime, the struggle between FWSO and musicians’ union was neither as entertaining nor as successful –– but possibly the acrobats’ equal in the contortions department. Fighting an existing $250,000 deficit and financial woes to come caused by reduced contributions and ticket sales (ticket sales make up only 35 percent of the group’s budget, though), the FWSO has asked for a cut of nine weeks from the season’s schedule, which would reduce the musicians’ annual base pay from $60,000 to $49,620, a cut of 17.3 percent, according to the FWSO. The union, which says the FWSO is understating the size of the pay cut (20 percent is the union’s estimate), voted overwhelmingly to refuse the offer. The voting membership includes musicians from Fort Worth, Dallas, and outlying areas. The group countered with a demand for a 2.5 percent increase.

Another meeting is scheduled this week. Let’s hope there’s common ground here somewhere. The FWSO is too important to become a casualty of the current economic slowdown.