The guys in the mod-rock trio Merkin get a lot of flak for naming their band after a pubic wig. Calling their first full-length album in an eight-year existence Scatology (the study of excrement) probably doesn’t help encourage being taken seriously, but they don’t care. “It’s all a joke,” said mohawked bassist Chris Donley with a laugh. “It’s all fun.”

The band members’ self-deprecating nature conceals a tightness and authenticity that other heavy bands aim for but often have trouble achieving. Donley, drummer Cameron Long, and singer/guitarist Joe Fuentes have been making music together since high school in River Oaks, and now, more than a decade later, they speak a musical language in which only the three of them are fluent. In the music, if not in the symbolism, the seriousness shows. 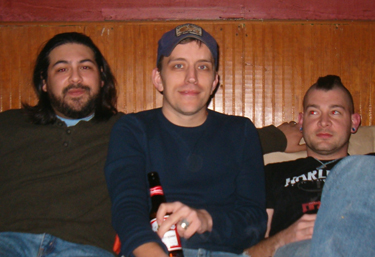 Donley and Long met in junior high and started a band, Pul, during their days at River Oaks’ Castleberry High School. One day, Fuentes, who was two years their junior, walked up and handed them a tape of him playing “Crazy Train” and songs by Korn and Tool on the guitar. Pul had found a new guitarist, and a few months later, the group broke out an overly long version of “No Quarter” at the high school talent show. In the late ’90s, Pul loosely turned into The Shift, then Jenny Dick, and, finally, Murkin (with a “u”). When a similarly named Swedish death-metal band sent the Fort Worth guys a cease-and-desist letter, Merkin, as it now stands, was born.

Fuentes wrote much of the early (and still current) material without any formal knowledge of how music works. He knows notes by ear only, and if it sounds good to him, he said, then “it must be good.” Other guitarists ask him how he came up with particular distorted, driving solos, and his answer is always simple: “I do what I want to do, and I make it work regardless,” he said.

The result of Fuentes’ intuitive style is a pleasantly dissonant guitar sound that constantly shifts pitches. It meshes well with Donley’s steady, extra-low bass lines. Long plays his large drum kit furiously, dynamically, and with metronomic precision. Each band member comes up with his own part, and the elements fit together perfectly.

In the years since Merkin began in 2002, the guys have earned every stripe associated with being local musicians. Their first show was in 2003 on the big stage downstairs at Ridglea Theater to a crowd of about four people, but things have since changed for the better. Several demos –– mostly CDRs and one official Merkin EP –– are floating around North Texas, but the guys never had the cash for an actual album until 2009, when they hired Ben Napier (Automorrow, Keepin’ It Real, Bogus Green) to capture 12 songs at Nomad Studios. The wait was worth it. Scatology shows off a band with refined chops and a tightly focused sound. The CD release show, which happened in April, was just about the group’s 200th gig, all almost exclusively played in Fort Worth.

Merkin will be performing at the New Year’s Eve show at the Ridglea, and the band is happy to be a part of Ridglea folks Wesley Hathaway and Richard Van Zandt’s final NYE event. The owners will still be part of the venue in some capacity when new owner Jerry Shults reopens the place in September, but as head honchos and official booking agents at the venue, their days are numbered. Merkin is one of many bands that want to publicly thank Hathaway and Van Zandt for the support they have given the Fort Worth music scene over the years. “They have done so much for us as a band,” Long said, including constant gigs and a seemingly endless supply of Budweiser. “My life has been enriched by having them around.”

For better and worse, the guys in the band have been forever changed by being a part of Merkin and the Fort Worth music scene. Fuentes laughs about his adult-onset deafness. Long’s liver might do the same if it ever learned that he’s drunk enough Bud over the years to cover both his entire drum kit and two walls at Froggy’s Beach Club with used bottle labels. The guys’ friendship has been altered to the point in which they neither practice regularly nor hang out together when they’re not playing live. In the big picture, though, being in Merkin is worth the effort, they said. “We all love music equally,” Donley said. “We envision the same things out of it.”