The name Pequeño Mexico (“Little Mexico”) might not ring a bell with most local folks. But if you say “the little Mexican flea market by the go-kart track on University Drive,” they’ll know just where you mean. For years a mostly Hispanic crowd has gravitated to that sprawling outdoor marketplace on weekends to buy food and goods, drink a few beers, and maybe take a turn or two on the dance floor.

It’s no palace — a collection of aging outbuildings provides makeshift shade for vendors who sell wares to customers strolling around what amounts to a big parking lot. Lately, though, the place has been taking on a little shine. A new owner has shored up the buildings and painted them in bright colors. A work crew spent the better part of two weeks cleaning up years of trash that had piled up along the nearby Trinity River bluff. They also cut brush, trimmed trees, spiffed up the market entrance, repaired restrooms, and mowed the 12-acre lot. 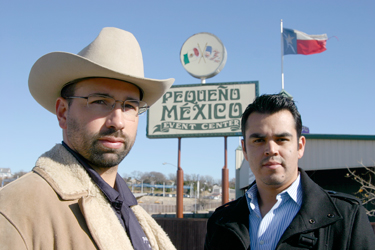 He realizes the current perception of the place is a “worn-down flea market by the go-kart track.”

But de la Torre, who also owns the fashionable, Cuban-influenced Embargo lounge in downtown Fort Worth, sees a diamond in the rough that could one day shine as a multicultural gathering spot.

“The heart and soul of Pequeño Mexico will stay Hispanic in terms of how rustic it is,” he said. “But we want to make sure it’s Fort Worth-friendly so people, even though they’re not Hispanic, can come out and listen to music and stroll through there. We think of it as an open-air market center.”

Fort Worth City Council member Sal Espino recalled visiting Pequeño Mexico as a young man in the 1970s. For little money, people could buy shoes and clothes for an entire family. Then and now, families on the North Side referred to the open-air market as la pulga — “the flea.”

Some people in the 1970s weren’t exactly thrilled to see a Mexican flea market spring up at such a high-profile corner. Louis Zapata, the city’s first Hispanic council member, remembered getting complaints when the market was new.

“People assumed because it was always Mexicans there that there was going to be shootings and cuttings and all that, but that was just a stereotype,” Zapata said.

All these years later, the market has grown and become a part of the landscape and the neighborhood fabric. Large-scale concerts might meet some resistance from nearby homeowners in the future, but de la Torre said he’ll comply with the city’s rules and regulations.

Homeowners who live atop the hill near that intersection on Jacksboro Highway sometimes complain about the noise when bands play there, Espino said.

One of Espino’s biggest disappointments as an elected official was getting so close to seeing a Wal-Mart Supercenter developed on that corner. After two years of negotiation, Wal-Mart scrapped the idea in 2007. Much of the property lies in a floodplain, and Wal-Mart decided development costs would be too high.

“It was a major disappointment to people on the North Side,” Espino said. “It was going to be a great retail project for our city but not everything comes to fruition.”

“I’m excited that Andrew and his group are improving the property,” he said. “It needs a facelift. It’s a major gateway into the North Side and downtown. Andrew is a good guy. He’s done some good stuff downtown.”

By about 11 a.m. much of the crowd moves toward the center of the property to “The Day Dance,” a covered gathering place with a small bar, big-screen TV, dance floor, and music stage. Caballeros amble up the Trinity River banks on horseback, hitch their horses under shade trees, and then have a cold brew and a dance or two.

In the afternoon, the crowd ends up at the west end of the property at “The Night Dance,” a 20,000-square-foot concert plaza with a large stage and an enticing view of the downtown skyline.

Only about half of the property is currently being used, and de la Torre envisions a renovation that could bring in rodeo events, carnivals, dirt bike races, weddings, and Austin City Limits-style music festivals with multiple stages and a wide variety of musical acts.

“It’s a great piece of property,” he said. “It’s so accessible, so close to the heart of downtown and the Stockyards. We want to keep the rustic feel, but we want to clean it up. We’re already into some of the renovations that needed to happen, and we will continue to renovate to attract new vendors.”

Rent for vendors will not increase, at least for the foreseeable future, de la Torre said.

The marketplace is a success inasmuch as it’s lasted for decades and continues to draw a crowd. But it isn’t living up to its potential. Currently, about 30 vendors set up regularly. Much of the property is unused. There’s no established parking place, so visitors tend to scatter their vehicles willy-nilly around the property. Sometimes the place looks nearly empty, when in fact a couple of hundred of people are milling around inside the high fence that surrounds the entrance and provides overnight security but obscures the daytime action.

“We want people to be able to see the commerce going on inside,” de la Torre said.

The property’s potential is what attracted de la Torre and his on-site manager Sergio Cruz, both of whom worked for years at Joe T. Garcia’s Mexican Restaurant before striking out on their own. The floodplain location prevents them from building permanent structures but leaves opportunities for various outdoor events.

Most of the grassy pasture on the property’s far west side, which extends past the go-kart track, is unused. “We have all that space out there to hold large events — it’s just gorgeous out there,” de la Torre said. “It’s got a nice tree line, it’s fairly close to the Trinity River, and you feel like you’re somewhere else,” not almost downtown in a city of 700,000.

“We intend on keeping the stuff they’ve been doing for 40 years, the open-air market,” he said. “Going forward we want to expand on that. There is a whole lot of frontage there, and we would like to see commerce there more often than just the weekends. We want to make it better for everybody.”

“We’re in operations right now; if somebody wanted to call me up and do an outdoor event tomorrow, I can make it happen,” de la Torre said.