Though it recently came down at the Modern Art Museum of Fort Worth, K-Mart Conceptualism by Fort Worth multimedia artist Vernon Fisher lives on through a community writing project initiated by the museum. Navigating By the Stars, which also is the title of a book of Fisher’s fiction from 1974 to 1986, is a collection of short stories by non-famous authors inspired by the exhibit, submitted electronically over the course of several weeks, and aggregated at http://themodern.org/fisher/narrative.html. 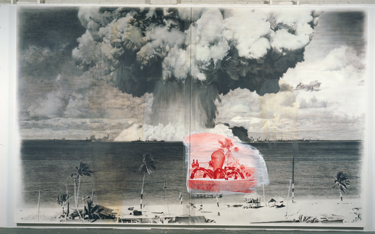 Like Fisher’s writing –– some of his artworks consist mostly of text –– the submissions are pretty straightforward though imagistic. Fisher earned a degree in literature before becoming a visual artist, and you could argue that even his wholly painterly, text-free pieces are driven by a kind of narrative. A prime example is “Bikini,” a massive black-and-white painting of the atomic bomb blast on the Bikini Atoll in the 1940s –– toward the bottom center of the piece is a salmon-hued painting of a plastic octopus, from a miniature golf game that Fisher had come across one day. The juxtaposition of utter destruction with mindless entertainment speaks directly to a specific sentiment, one that arguably defined the Cold War:
You made time for diversions even though the specter of total annihilation cast a shadow over everything you did. If you didn’t make time, if you didn’t try to enjoy life, you could have very well driven yourself mad.

“We initiated the project to engage people with the art in our galleries, specifically Vernon Fisher’s work in K-mart Conceptualism,” said Kendal Smith Lake, the Modern’s manager of communications. “Since Vernon’s work is about narrative and each person creating the story, we thought it would be interesting to pull these thoughts together and give people a forum to express their experience.”

One of Navigating By the Stars’ standout pieces is “Anywhere But Here” by Sarah Bishop. Told in the form of five interconnected bursts of flash fiction bordering on prose poetry, the piece revolves around car-radio static, border-town Texas, and the calm search for a missing something (perhaps a concept but most likely a loved one). A pervading sense of ambiguous dread haunts the main character:

It feels as though I’ve misplaced something. I reach to search and remember you’ve gone.

You, shadow-shaped house keys under bills. You, slippers with the backs missing. You, elusive knife for paring peaches and cucumbers.

Gone for a little while, you said — like a twitchy father slipping out for cigarettes.

I forget, sometimes. I plod about the house with my head tilted as though what I’m looking for will fall out, which is why I chuckle chastisements, prattle daftly, pull out the broom — sweep — and because there’s always a bit left, sweep again.

Lorrie McClanahan’s “In the Mind the Commas Come and Go” is another nice entry, its focus on the creative process as a mild form of destruction. “Child’s play, really,” she writes. “You can’t get self-conscious or overthink it. It’s like a list, like the first thing that comes to mind. Just pull something out of the box, the brain, the heart of darkness. And, yes, it was like that, although nothing’s ever as good as it is in my head. Just writing it down here diminishes it,
you know?”

The Modern received seven entries and accepted all of them. “We feel the project was successful, even though it was just a small group of participants,” Lake said. The museum expects to publish a “small-format publication” (as opposed to a book) in mid-February.

Don’t forget to submit your original, previously unpublished art to me at anthony.mariani@fwweekly.com to win a chance to have your artwork appear on a bottle of beer from Rahr & Sons Brewing Company. The contest is part of our inaugural Visionary Awards, honoring three young and outstanding 817 artists (to be determined by a committee of art-world pros later) practicing in various disciplines, including but not limited to visual art, drama, and literature. Rahr has agreed to craft a special beer just for us, the Visionary Brew. The winning entry will be featured on every label in every batch, and the winning artist will be invited to participate in the brewing process. Art + Beer = Good Times. For more information, e-mail me, pick up a copy of last week’s paper, or visit www.fwweekly.com. Deadline for submissions is midnight Fri., March 4.